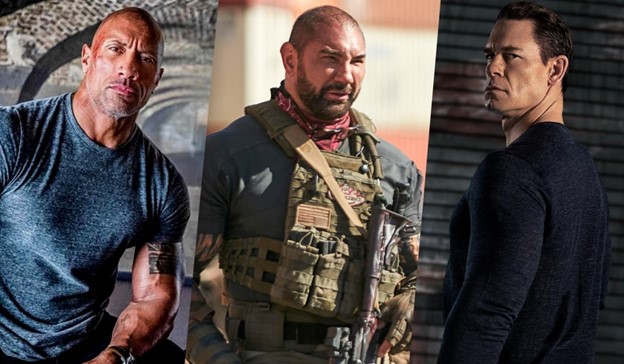 It’s Dwayne “The Rock” Johnson, The Great One; do you smell what he’s cooking? Wait, it’s the “Animal’” himself, Batista; can he be tamed? Or can you see him, Mr. Hustle, Loyalty, and Respect, aka John Cena?

So, by writing this article, does that means we need a triple threat now between these three professional wrestling legends to determine who stands as the better man on camera? Let’s avoid it for the moment (even if it would be a dream matchup for all to witness). It probably would become called “The Battle of Hollywood WWE Legends.”

Last year, an article written (by yours indeed) explained how Hollywood became a marketplace for WWE professional wrestlers. The COVID-19 pandemic may now dictate who follows suit as only a few companies are triumphing in these times. In this one, we’ll examine three stars of the professional wrestling business and how they attained success in the Hollywood field. Yes, some other professional wrestlers have tried to rope themselves into blockbuster films, but they don’t have the impact or, dare I say longevity, these three have in both spheres.

In today’s time, almost every person in the world knows who Dwayne Johnson is. He is a Hollywood sensation, along with the likes of what Arnold Schwarzenegger and Sylvester Stallone once were back in their prime years. He’s one of the world’s highest-grossing actors, one of the most influential people globally, and one of the top stars on Instagram.

Back in his wrestling years, he helped usher in the Attitude Era, the peak of pro wrestling in the late 90s and early 00s. His feuds with “Stone Cold” Steve Austin and the boss, Mr. Vincent McMahon, are considered some of the greatest ever, and he won over audiences with his charisma and microphone skills. In the early 2000s, he took time away from pro wrestling and stepped into the film industry with works like The Mummy Returns and The Scorpion King. For years, his film selection became abysmal despite making money as the storytelling stayed mediocre while the extravagant effects took over. It was almost as if he started on the wrong foot and never regained any ground.

He finally gained colossal momentum when he joined The Fast and Furious franchise in 2011 and gained more prominent features with Skyscraper, Rampage, Central Intelligence, Moana, and the Jumanji franchise. His busy work ethic keeps him occupied with more and more projects, and he doesn’t appear to be slowing down soon as he will be in several new movies (or sequels) in the future. He returned between 2011-2013 to have a monumental feud with John Cena with both men trading wins at WrestleMania and has made sporadic appearances ever since. Even though he quietly retired from pro wrestling in 2019, he still can return to WWE one more time for a legitimate dream match against his cousin (and current star of WWE), Roman Reigns.

For now, Dwayne Johnson stands as a prolific player in Hollywood, rivaling top actors like Samuel L. Jackson, Robert Downey Jr., and Scarlett Johansson. He will star in Red Notice, releasing on Netflix in November, and as the titular character in Black Adam in the DCEU in July 2022.

Dave Bautista’s story is a little more interesting. He became a rising star from joining a group and eventually headline the “Ruthless Aggression” era alongside John Cena. He stepped away from WWE in 2010 because he was not pleased with the company’s direction (interestingly enough, Cena was the top guy at the time), and he didn’t re-sign.

He has appeared in two of the top-10 highest-grossing films of all time, whereas Dwayne Johnson himself only has one. An impressive achievement and something Johnson will not get to touch for a long time. Imagine if those two worked together to draw in viewers or Cena and Johnson got together with Bautista. However, Bautista has commented that he has no desire to work with Johnson or Cena in Hollywood. It’s a shame since they could theoretically all appear in the same universe (or film) at one point.

Bautista also has found success in other works like Spectre, Blade Runner 2049, and Army of the Dead and will continue acting for the foreseeable future. He made returns to WWE in 2014 and 2019 before officially retiring in 2019. Even if his wrestling career is officially over, fans sure do well remember his time and contributions, and they can find him somewhere in today’s selection of films (notably the Dune work coming at the end of October this year).

Lastly, John Cena has been on a recent roll in Hollywood as of late. 2021 is undoubtedly his year, as he starred in the blockbuster F9 (the second highest-grossing film of 2021), the highly acclaimed The Suicide Squad, and comedic Vacation Friends available on Hulu. He also returned to WWE this year for a short stint known as the “Summer of Cena,” and he ended up main-eventing a record-breaking Summerslam in Las Vegas in an attempt to break the record for most world championships.

John Cena is regarded as WWE’s golden boy, as he carried the company for nearly 15 years straight as a “Superman-like” good guy and sold numerous tickets and merchandise. Sixteen world titles to his name (funny enough, that is Johnson’s (10) and Bautista’s (6) world championships combined), WrestleMania and Summerslam main events, hundreds of Make-A-Wish contributions, and even the prestigious Muhammad Ali Legacy Award.

His acting career started fragilely, arguably even more deficient than Johnson’s and Bautista’s. The Marines and 12 Rounds made headlines for all the wrong reasons. Cena himself even claimed he stumbled badly at the start before getting a second chance. Luckily, he started climbing the mountain with roles in Trainwreck, Ferdinand, Blockers, and Bumblebee. Cena’s three film releases in 2021 elevated his celebrity status, ensuring he is dripping with momentum for his following slate of films.

He will star in the upcoming Matthew Vaughn Argylle movie and the political thriller film The Independent, alongside Kathy Bates. He will reprise his role as Peacemaker from The Suicide Squad in his upcoming eponymous television series on HBO Max (releasing in January 2022). He will most likely return as cohost for the renewed second season of Wipeout and Vacation Friend’s sequel, Honeymoon Friends. And since The Fast and Furious is wrapping up with two last main installments, he might return for one or both. The franchise player of the WWE is following in the steps of the Rock; the irony is that he once criticized his former rival for transitioning away from wrestling when others could say the same to Cena now. Despite that, both have settled their differences, given back to the wrestling business significantly, and acknowledge they cannot physically function the same way they once did a decade or two ago in a WWE ring.

These three individuals have catapulted themselves in the Hollywood atmosphere, winning over audiences with their huge muscles, charisma, and humor. And they are doing something relatively different compared to the pro-wrestling ring that produces freshness and variety. Cena gets to portray a villain (finally and wonderfully), Bautista experiments with many different genres, and Johnson constantly flexes insults or beats up bad guys in absurd ways. And sometimes, it could get repetitive, but as long as audiences buy into it, there are no genuine concerns.

Has one outperformed the other one or two at times regarding box-office success? Absolutely.

But is one actor/performer better than the other one or two? Not at all.

Each of them has found marvelous success with particular roles or franchises. Cena is ascending to the top, while Bautista and Johnson are already holding form in their respective positions. They maintain strong work ethics and professionalism, and many respect them for doing so both in Hollywood and WWE. Carrying that element and passion from the squared circle undeniably worked for them journeying to the acting field.

Dwayne Johnson, Dave Bautista, and John Cena have made their marks known for Hollywood’s past, present, and future. The question is, will someone from the WWE ring be able to join their club anytime soon, or if ever?