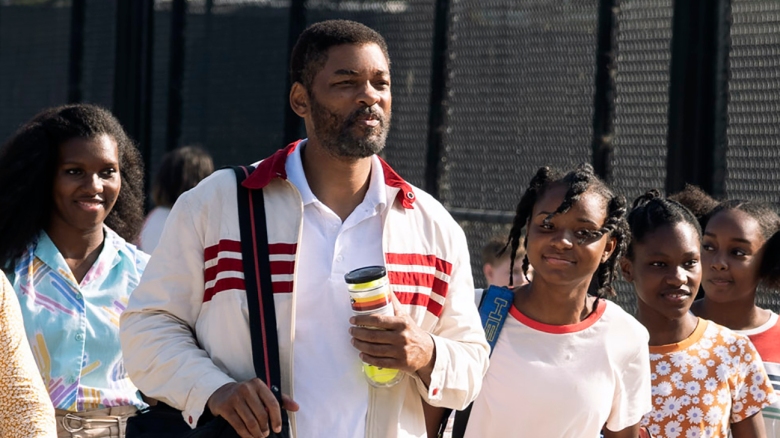 The biopic scene is as hit-or-miss as ever, but “King Richard” has proclaimed itself as not only one of the best biopics of the year but one of the best films of the year. This heartfelt and soulful film could bring Will Smith his first Oscar gold, and it is deserving of the praise it will receive.

On the surface, Richard (Will Smith) is maybe not the best dad. He pushes all five of his kids to their limits; making them practice in the rain, get straight A’s, and keeps them in a continuous cycle of school—practice (if applicable)—homework—sleep. However, this drive that Richard has makes sense because of the opening fifteen-to-twenty minutes. This time is devoted to building up Richard’s ethos. We see him get beat up and constantly rejected, and he spends his nights after long days as a security guard. There’s a shocking moment where someone is shot in the streets; this is a harsh reminder of why Richard wants all of his kids to succeed. Police brutality/abuse of power is lightly touched upon, though it isn’t explored further than a visit to the Williams household and a brief snippet of it on television. Despite the constant rejection from numerous golf coaches and promoters, Richard never gives up. And for as selfish as his intentions may seem, there is a twinkle in Will Smith’s eye that will keep you on his side.

Richard’s biggest flaw is that he does run into LaVar Ball territory. In case you’re unfamiliar, the father of three basketball players: Lonzo, LiAngelo, and LaMelo, created a lot of noise with each of his sons going into the NBA draft. Did it work? To some degree; but like Richard in “King Richard,” the kids become celebrities before playing a match (or game) professionally. The Williams sisters, along with their father, are doing interviews in their pre-teen years, and it brings a distraction from their tennis careers. Despite the fact that it doesn’t end up affecting them down the line, some are not as fortunate as the Williams sisters. Again, Richard is tough on all of his daughters, but the line (that may not be in the final film): “This world ain’t never have no respect for Richard Williams, but they gonna respect y’all,” sums up his intentions. It’s a great example of what the “American Dream” can look like.

But it’s not just Smith who shines, the girls who play Venus and Serena; Saniyya Sidney and Demi Singleton, are incredible. They both resemble their real-life counterparts, as seen in the photos in the end credits. Venus is given more focus in the film, and she hangs with Smith in the most powerful scenes in the entire film. Aunjanue Ellis plays Richard’s wife, ‘Brandy’. There is one argument scene in particular towards the end of the film that had the theater hooting and hollering with her. She is a secondary character, but also one of the most remarkable ones with some of the wittiest dialogue. Jon Bernthal plays Rick Macci, a renowned tennis coach, and is electric from the moment he first appears on the screen. Bernthal is just a joy to watch, with the mustache and Ohio accent making a perfect combo.

Tennis is such an intimate sport. Generally, it’s a one-on-one or two-on-two match, and it’s just a game between you and your opponent. Director Reinaldo Marcus Green chooses to literally drown out the audience in some of the tennis scenes, making for a Western-like showdown between Venus/Serena and their opponents. From the intense back-and-forth nature of the sport to the satisfying sound that comes with tennis, the matches are nail-biting akin to the basketball games in “The Way Back.” This is by no means coming from a tennis expert, but the sequences looked natural. A lot of this should be accredited to Sidney and Singleton, who both looked like actual tennis prodigies in “King Richard.”

“King Richard” is not a perfect biopic; it, like many others before, certainly can feel cliché at times. But the emotional beats do resonate and feel real, mostly due to Will Smith’s fantastic performance. He has not been this good in years. It’s a feel-good, inspirational biopic that will be a crowd-pleaser when it gets its wide release. Buy the hype and don’t be intimidated by the 2 hours and 18-minute runtime; it will fly by.

“King Richard” will be released in theaters and HBO Max on November 19.