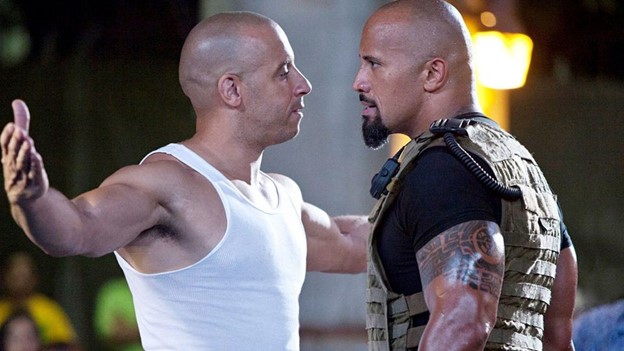 Dwayne Johnson and Vin Diesel indeed have a rivalry that has marinated behind the scenes slowly and continually over the past few years.

Johnson joined the franchise back in 2011 when he appeared as Agent Luke Hobbs in Fast Five. Everything seemed to stay copacetic from then on until Johnson indirectly referred to Diesel as a “candy a**” years ago when they filmed The Fate of the Furious in 2016. On the other hand, Diesel claimed proportions overblew it, and he explained that he “protects the franchise [plus Dwayne]” ever since the late Paul Walker sadly passed away during the filming of Furious 7.

However, fans reached out to Johnson after the 8th installment was released, and Johnson confirmed he and Diesel did not film any scenes together. Diesel claimed he was trying to get a differing performance from the former WWE superstar, but Johnson was not pleased with his attitude on set or professionalism. Afterward, Johnson confirmed he would not appear in F9 or any of the future main installments of the series. His spinoff, Hobbs and Shaw, was a substantial success, and it seemed that the bad blood between him and Diesel quieted down after Johnson thanked Diesel in a post about endorsing the film. In the past few months of 2021, both men have “joked” about the feud, and it may still linger from thought to thought.

However, recent news has surfaced in which Vin Diesel reached out to Johnson by asking him to return to the Fast and Furious finales because he made “a promise to Pablo [Paul Walker]…I hope you rise to the occasion and fulfill your destiny.” It will be highly dependent on Johnson, but it would benefit this soap opera crazy franchise if he ultimately agrees.

Ever since Paul Walker tragically passed away in 2013, the follow-ups to Furious 7 have missed his presence sorely. Scott Eastwood couldn’t get the job done in 2017, and John Cena tried to rivet the fan base in 2021. Johnson’s character is not in the main installments anymore, Han returned from the dead, Brian O’Conner (Walker) retired, and Dom’s brother Jakob (Cena) is free and on the run. So, the stories left to tell have no mileage (unless they whip out some other convoluted surprise).

Johnson not only should return, but he needs to. It will bring two mega Hollywood stars back together to create another hit. Johnson’s luck as of late (ex. Jungle Cruise and Red Notice) has not given him a stellar track record during the pandemic years, while Diesel’s name etched in Fast’s name is his (only) saving grace.

It’s time to bury the hatchet and take one last ride with both men.

In addition, if this franchise pulls out the Star Wars Episode 9 or Avengers: Endgame stops like bringing in Gisele from the dead (played by Gal Gadot) and former villains like Luke Evan’s Owen Shaw plus the entire family, Diesel, Cena, Statham, and Johnson (hopefully) again, Fast 10 and 11 will soar to another galaxy (assuming they have not planned it already).