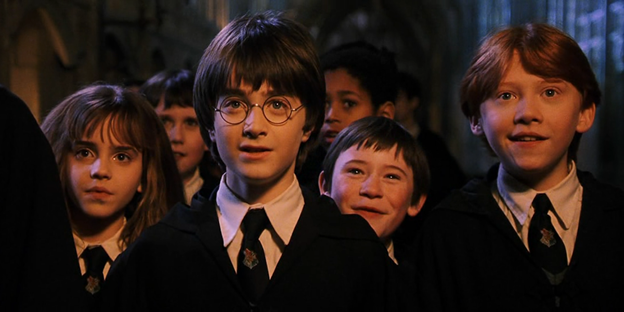 On November 16th, 2001, a new era of pop culture had erupted. The world would finally get to grasp J.K. Rowling’s magical series onscreen after she wrote a selection of seven books (between 1997 to 2007) on a character known as Harry Potter.

The 11-year-old Harry Potter lives a miserable life with his cousins, the Dursleys. Eventually, a giant being named Hagrid would inform the young boy that he’s a wizard, and Harry would become part of the Wizarding World. Harry would begin his wizarding education at Hogwarts School of Witchcraft and Wizardry. Along the way, he became best friends with the intelligent Hermione Granger and lazy but headstrong Ron Weasley. Together, the trio would learn, evolve, and brace themselves for the inevitable return of the evil Lord Voldemort, who wishes to wreak havoc on the Wizarding and non-Wizarding worlds. Throughout, many learn that Harry and Voldemort became connected in more ways than one. It would culminate in confrontations, battles, and unique duels to solidify who the greatest wizard (and better man) is.

The utmost reason why the Harry Potter series became a cultural phenomenon is the escapism feeling and sense of wonder and belief. It’s the same reason why many have devoted themselves currently to Star Wars and the Marvel Cinematic Universe series. Not to forget, in a day and age when the COVID-19 pandemic has dutifully reminded us that time does not last forever; it’s the choices and memories that make us who we are. Harry Potter reminds us of that last detail, and many become engaged in a world where anything is possible.

Spells cast from wands, wizards can teleport in seconds, and owls transport messages. Another reason for this series’ immense popularity is because it portrays a hero searching for and grasping power. It’s very reminiscent of life with uncertainties, successes and failures, and conflicts between the light and dark sides. People relate heavily because of Harry Potter’s relationships and growth from a youngster to an adult. As humans, we can share love and friendship.

And the series respectfully transitions from one chapter to the next in a potent fashion, reminding us that each journey has a starting and ending point. In each one, Harry Potter learns to keep his friends close amidst the growing forces of darkness. Along the way, his mentors protect him at all costs yet remind him of the essential values.

The Sorcerer’s Stone introduced The Chamber of Secrets. The latter led to mature titles known as the Prisoner of Azkaban and Goblet of Fire. Those two progressed to the Order of Phoenix and Half-Blood Prince, culminating in The Deathly Hallows. Each book adapted on film is worthy of witnessing, and it beautifully builds to a powerful finish. The Harry Potter film series is arguably the best franchise out there, and many of us will remember its legacy for years and years to come.

This writer recalls seeing the climax, Harry Potter and the Deathly Hallows Part 2, on July 15th, 2011 (released nearly a decade after the first installment). The tagline, “It all ends here,” became unparalleled that night.

If one has not watched (or read) this collection, start your journey with The Sorcerer’s Stone. Escape into the fantasy realm with tangible magic almost at hand.

As Albus Dumbledore once said, “Happiness can be found even in the darkest of times. If only one remembers to turn on the light.”