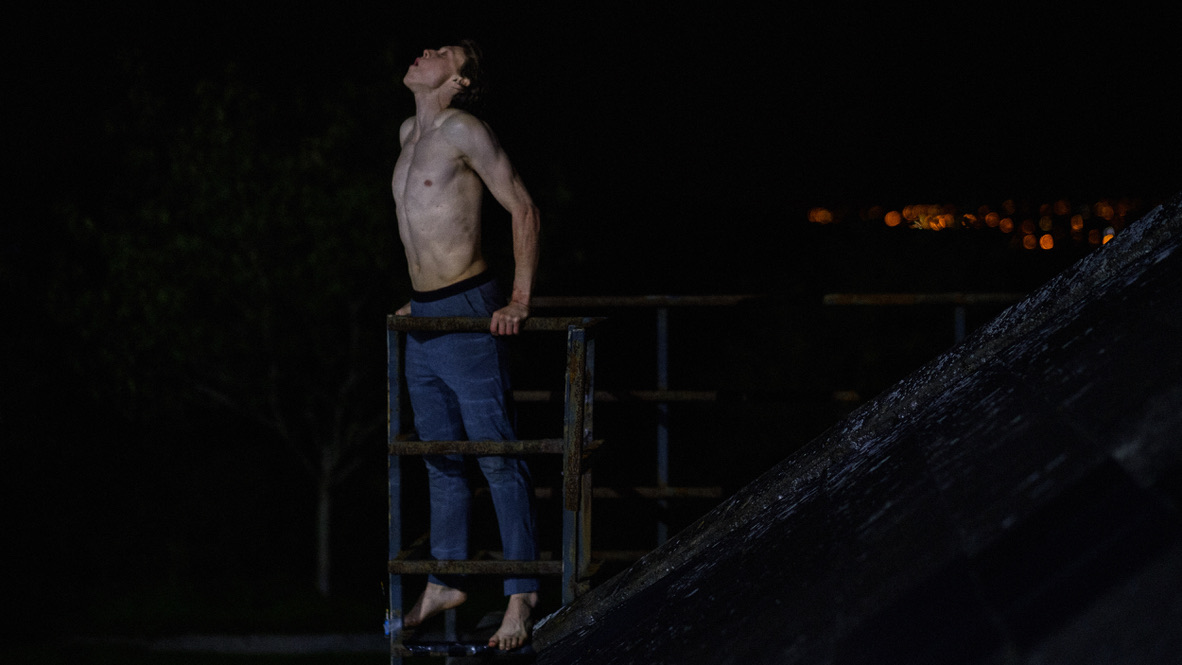 Interviews on December 3, 2021 0Likes At The Movies
ShareTwitterFacebookInstagram

George MacKay has been a working actor since 2003, where he played Curly in “Peter Pan.” Most recently, you may have seen him in the award-winning war film, “1917,” where he played a solider tasked with the dangerous mission to deliver a message that will save 1,600 soldiers from death. Now, he plays Jacob in “Wolf,” a film about Jacob’s struggle with believing he is a wolf. It’s a vastly different role from his character in “1917” and allowed the young actor to show off his ability to carry a movie. While “Wolf” is not an easy watch, George will command your eyes, and the level of commitment and intensity shows in his performance.

I spoke with George over Zoom. Despite some technical difficulties on my end, George was extremely understanding and one of the most polite and insightful actors I have spoken to. In this interview, he speaks about the intensity of his role, the depths he went to in preparation, working with co-stars Lily-Rose Depp and Paddy Considine, and some exciting upcoming roles. He is one of the most talented young up-and-comers, and expect to see George in plenty more roles in the near future.

First of all, George, congratulations on the film [“Wolf]. I thought you were really great in it. I think the first thing I’ve seen you in was “1917,” and this is obviously a major change of pace for you. Did you know about species sport coming into the film?

GM: No, I’ll be honest. I didn’t even think about it coming into. But then in the playing of Jacob, to be honest, I didn’t do too much research on it because I thought for Jacob, he doesn’t feel that he has that [species dysphoria]. I think he just feels that he is a wolf. I just concentrate[d] more on the animal side. So I guess try to distill it to just what I felt Jacob would have is that I think he feels that he has a condition that he thinks that whether he just, he is just in the wrong body.

Yeah. How did you find yourself, you know, channeling that? It’s a very intense role.

So certain points or either uncomfortable in either literally your own body or like the context that you’re in, um, you know, be that like kind of that first day at school or, or whatever it is, like there’s times where you sort of have that real kind of battle with yourself. And I really felt that [it] really resonated with me and in the script and in the story, this feeling of like, just being true to yourself. There was kind of experiences, you know, in your, in your own. And otherwise, I mean, the preparation for the role we had, like, um, this, uh, this week before we were, we were meant to start her stores and it was going to be myself, Natalie, our director, and this amazing movement coach called Terry Notary. And we had one week to kind of work drop on the animal side of the character, and then we were going to have two weeks off, [then] I’d start production. And in that two weeks, the lockdowns in the UK and sort of shut down the world. And so we ended up having like three months. But in that one week with discovered all this amazing stuff about the character and possible ways to express his animal side, the house in the crawl, and that actually gave us so much kind of stuff to take away and just be working on for months.

So it was across that time, like it was a mixed. Just practicing the crawling, practicing the sorts of animal nature in the howl, uh, and what the howl was. And then also Natalie, and I would write diary entries of Jacob back and forth and, and we’d just keep discussing the character always. So it was, it was sort of a development over time, really.

And were there any scenes in particular that stood out to you as, you know, something hard to sustain?

I guess sort of like just sustaining the crawl, like, you know, the, the days when you’d just be doing crawling all afternoon, you know, just your body would get tired.

Probably the scene that we worked on most was there’s a scene where Lily-Rose [Depp] and my character, sort of interact purely as animals up on the roof at nighttime. And that sort of that in the film, you know, in the script, it’s like, it just says Jacob and Wildcat [Depp] discover each other as animals or something like that. And in that one line was like all this possibility as to what that scene could be. And we sort of worked [it] out, we just developed it and workshop and play them, rehearse all different versions of that scene, which was like really intense. A bit more human. A bit more. Yeah. What the relationship was as kind of all of those sorts of animal desires. And until we sort of found the kind of basic choreography of the scene, so that was probably one of the hardest ones, but actually one of the ones I’m most proud of.

Paddy (Considine), who played the Zookeeper, what were those [scenes with him] like as he’s a very intense [performer]?

I mean, Paddy’s just the master. And I remember the first rehearsal that I had with Paddy, he came into the room and Natalie just set up an improvisation. It’s like, this is your first session with the Zookeeper. And he played it really nice, really gentle. And he just started asking me these questions, which I had to honestly, as the character. But I sort of found [that] I couldn’t answer them. He started going, “So you are a wolf and you believe you are a wolf?” [and I replied] “Yeah. Yes. Yeah. Yeah.” And then he started saying, “But do you, or do you not have hands?” [and I replied] “Yeah, yes, I do.” He says, “You do know that wolves don’t have hands,” or something like that. And it’s kind of, and he just immediately started unpicking like my character and, and like as, as the Zookeeper would, and it was so brilliant because I suddenly thought, “Fuck, this is what Jacob should be doing his whole life. Like how, [do I] articulate what I am like, how do I sort of, I don’t even know what I am, you know?” It was so brilliant doing those scenes with Paddy, but always kind of, until he kind of got really nicely, he began the characterization, this really kind of nice unassuming way that we’re kind of lull you into this false sense of security, you know? Um, so it was, uh, yeah, it was a pleasure to work [with Paddy].

How did you kind of portray, I know you talked about writing journal entries as Jacob, but Jacob has that internal struggle, especially in the beginning where he’s trying to repress that feeling of being a wolf, right? Did you find that hard [to portray as] that must’ve been like, hard to film and to go to that place where you’re trying to deny, deny, deny?

Yeah, yeah, yeah. I think, um, yeah, that was, that was, that was hard. Cause emotionally that is sort of him at his darkest really. And to go to that place again, so it was just a case of just, just kind of being those ones where you’re just most in the character, kind of giving yourself to what he [is] feeling at that point and kind of going to where he goes.

What was it like working with [Lily-Rose Depp]? Because you guys have a lot of very personal scenes together.

She was so giving to the project. It was really inspiring because you know, the scenes, as you say are so personal and, and on top of that often quite strange and, and just, we had such trust between the two of us, and that that came from a kind of commitment and enthusiasm for the role.

Finally, do you have any roles upcoming that you can talk about a little?

Yeah. So there’s another film coming out in January called “Munich: The Edge of War,” which is a thriller set the year before the Second World War. Yeah, and then there’s another film called “I Came By,” which I did this year, which will be coming out at some point next year. And that’s about these two graffiti artists who are kind of rallying against the establishment and then kind of get caught up in, in this sort of pretty, they get caught up in something, but I can’t tell you what.

Thank you to Focus Features and Ginsberg Libby for giving me the chance to speak to George.