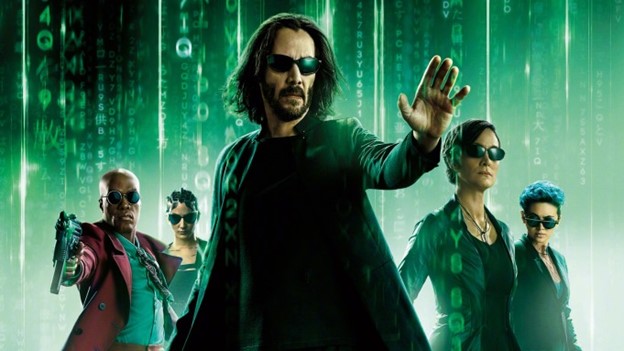 At the end of The Matrix Revolutions, little Sati and (the re-casted) Oracle discussed if they would ever see Neo again one day. “I suspect so, someday,” with the sunset taking over as the final shot.

Alas, twenty years later, we have a fourth chapter, Resurrections, to bring us a red pill to reawaken our minds to the Matrix. But exactly how and why was it necessary for another Matrix film to become distributed to the audiences? It’s a question that Warner Brothers will most likely stretch out over time, but it’s incredibly frustrating to think of how marvelous this franchise once was back in 1999 with its first, mind-bending installment and then two insipid follow-ups. We get it; the great action speaks for itself, but the prolonged narrative within the sequels becomes obfuscating and silly.

The plot picks up twenty years directly after the fallout of Revolutions, where Thomas “Neo” Anderson (Keanu Reeves) lives in San Francisco as a video-game designer (based off, you guessed it, the Matrix itself). He is entirely oblivious to the string of events in the first three movies, and his therapist provides him blue pills to distinguish reality from fantasy. Still, Thomas senses something wrong with this world he lives in, which intensifies when he meets a married woman named Tiffany (Carrie-Anne Moss) at a coffee shop.

“Have we met?” she wonders when both shake hands. Well, you both happen to know each other by different aliases at different times. Thomas meets up with new, alternate Morpheus (Yahya Abdul-Mateen II), who gives him the red pill and brings him back to the Matrix (although much more unsteady and darker). Thomas, well Neo now, wants to reawaken Trinity’s (not Tiffany’s) mind to the Matrix once again to reconcile with her since they shared immense feelings throughout the first three features. He works with Bugs (Jessica Henwick) and her team and a much older Niobe (Jada Pinkett Smith) to succeed.

Recall that Trinity died in Neo’s arms near the end of Revolutions after she became impaled from a devastating crash landing into the machine city. Neo resurrected her in Reloaded after encountering an agent, and she did the same for him in the first film. So, yeah, they have unspeakable love for one another. But they both died at the end of the third chapter, so how are they back?

Well, it turns out a bunch of exposition and liberal use of callbacks to previous scenarios will tie the past to the present. Director Lana Wachowski attempts to shelter all this with insane, groundbreaking action sequences and terrific performances by Reeves, Moss, Henwick, and even Neil Patrick Harris.

The thing is, we have already dealt with the same themes of free will, machines vs. humanity, and aspect of one’s identity three times now (more or less, within four years two decades ago). The rehashed writing behind the film is repetitive and not precisely more enthralling, even with Jonathon Groff attempting to channel Hugo Weaving’s initial depiction of Agent Smith. You’d think that since we’re “resurrecting” a franchise, we could resurrect the storytelling, too, right?

It’s saddening because this appears to be a nodding tribute to the past than exploring a new edge. And apparently, someone thought it was acceptable to make self-referential jokes to justify its existence cheekily. At least it is way better than Revolutions (and arguably Reloaded), so credit where it’s due.

Once again, excellent action sequences, performances, cinematography, and nostalgia will win folks’ hearts over. Still, when ultimately freeing your mind to the experience, it’s Deja-vu again, and Resurrections will become another glitch in the (once-flawless) system.

Final Trailer: ‘Fighting With My Family’

New Trailer: ‘On the Basis of Sex’