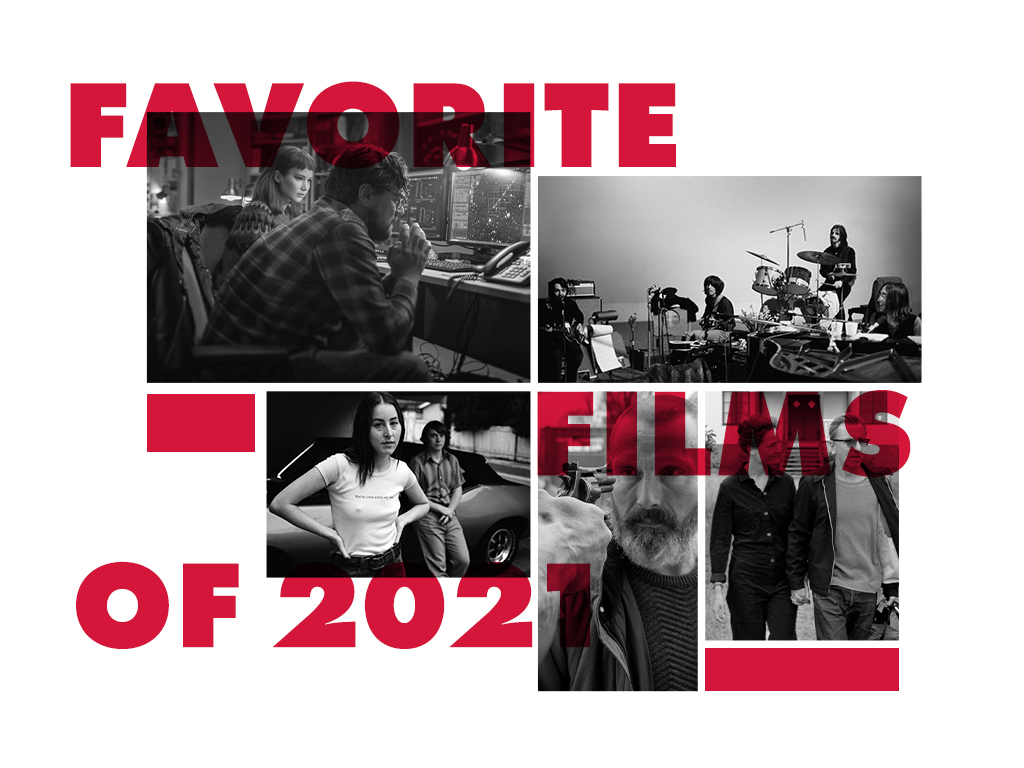 Spotlight on December 31, 2021 0Likes At The Movies
ShareTwitterFacebookInstagram

While everyone is still obsessing over “Spider-Man: No Way Home” (and rightfully so), 2021 brought some great films that were not attached to IPs. This list is a complicated amalgamation of my favorite and the best films of 2021. It’s filled in with some Unlike my “Top Ten Most Disappointing Films of 2021” list, this will be ranked. There were just so many great films that I had to have an honorable mentions section to at least shout out some films that either impressed me or stuck with me all year. So, without further ado, let’s begin with some honorable mentions.

“Belfast“: This was in the top ten for a while until “The Beatles: Get Back” and “tick, tick…BOOM!” pushed it out. I still don’t get the hate that some have for this one; I thought it was one of the most beautiful films of the year about The Troubles told through the lens of a small child.

The divide between critics on “Don’t Look Up” is shocking to me. I found the film to be hilarious, witty, and a great satire that felt like it had a decent understanding of different aspects of society whether it was social media, political leaders, climate change, millennials, etc.

“Last Night in Soho“: I thought this would make my top five after initially seeing Edgar Wright’s latest at the press screening. While the third act twist caught me by surprise, that may have been due more to the fact that Wright creates such an engaging world with brilliant needle drops. It covers the subpar twist more than it should, but that doesn’t make “Last Night in Soho” any less of a joy to watch. That dance scene still blows my mind. Both Thomasin McKenzie and Anya Taylor-Joy are great representatives of the exciting future of Hollywood.

“The Night House“: Rebecca Hall’s directorial debut, “Passing,” is arguably better than “The Night House,” but it’s her performance in the latter that makes the film worth noting. “The Night House,” for as much as the marketing tried to sell itself as a horror film, is more of a character study about grief. Yes, supernatural elements ensue, but there is a tenderness that a film like “The Invisible Man” failed to capture. Hall is just brilliant and one of the most consistent people working in Hollywood right now.

“Spencer“: All anyone can talk about with “Spencer” is Kristen Stewart’s career-defining performance, and rightfully so. She is absolutely sublime as Princess Diana, but Pablo Lorrain’s directing stood out just as much. The cinematography that follows Princess Diana through the museum-like rooms in the royal house and the claustrophobic score makes for one of the most well-crafted films of the year. It’s not a traditional biopic and it would classify better as an “imagining” of a time period in her life than a straight biopic that tells her story. This is simply one tumultuous weekend in Princess Diana’s life.

“Riders of Justice”: A late addition to the list, “Riders of Justice” is one of the great action films of the year. The Mads Mikkelsen-led dark comedy is one of the funniest films of the year. For example, there is a recurring bit about a barn that should not be nearly as funny as it is. It’s not as deep as Mikkelsen’s award-nominated film from 2020, “Another Round,” which deserved way more attention than it received, but a mixture of the comedy and plot itself makes for a great film that is easy to rewatch. Catch it on Hulu now.

“Spider-Man: No Way Home“: The MCU was full of misses for me in 2021, and I was ready to give up complete hope in the franchise. But it was Spider-Man who brought the joy of comic book movies back to someone who has become a skeptic of the genre. Not only was it filled with nostalgia that built my childhood, it finally gave Tom Holland’s Peter Parker an ending that shows maturity. I truly cannot wait to see where the franchise goes from here.

Some controversies are surrounding “Licorice Pizza” that may be fair, but it’s just a joyful watch that is like PTA’s equivalent to “Once Upon a Time… in Hollywood.” I have such a soft spot for Paul McCartney & Wings song, especially “Let Me Roll It” which is used in the film. Alana Haim and Cooper Hoffman are amazing; the latter would make his father proud of this particular performance.

“Licorice Pizza” is in theaters now.

9. “The Worst Person in the World”

“The Worst Person in the World” is a romantic comedy that defies most of the genre expectations. Renate Reinsve plays a 30-year-old who is still discovering who she is and what she wants. It’s the honesty of the life that Julie (Reinsve) lives that makes the film unique for a romantic comedy. Julie doesn’t get some “Hollywood” ending where she ends up with the perfect guy. It’s a somber reality check for those who are reaching that time of life where you hit the crossroads of settling down or continuing to just “have fun.”

“The Worst Person in the World” will be released theatrically by NEON on February 4, 2022.

This trip to Fårö is whimsical in all of the ways something like “Scenes From A Marriage” isn’t (granted, “Scenes From A Marriage” explores the mundane nature of a relationship). In a touching tribute to the legendary Ingmar Bergman, “Bergman Island” focuses on a writer, Tony (Tim Roth), and his wife Chris, (Vicky Krieps), two fans of Bergman’s work. Reality becomes blurred as Chris’ screenplay comes alive for the audience. “Bergman Island” doesn’t reinvent the wheel in any way, but the performances and locations are charming.

“Bergman Island” is available to rent on streaming platforms.

“Uncut Gems” and “Good Time” walked so “Shiva Baby” could run. This is one of the most claustrophobic films of the year like “Spencer” but it takes place in real-time at a house party where you have to worry about the worst expectations of them all: family expectations. The score by Ariel Marx has the tightly-wound strings of the “Midsommar” score that creates such anxiety that you expect a string to break any second. Oh, and Molly Gordon, a standout from “Booksmart” and “Good Boys” is in “Shiva Baby,” and she absolutely nails it. Don’t sleep on Rachel Sennott either.

The brilliance and boldness of beginning a three-hour film with forty minutes of the film rolling before throwing a title card on screen is something I have never seen, and Ryusuke Hamaguchi pulls it off. A film that explores loss and the grief that comes with it is done so well in “Drive My Car.” It may be three hours long, but it is worth it from both a filmmaking perspective and an acting showcase (Hidetoshi Nishijima and Tōko Miura are incredible).

“Drive My Car” is in select theaters now. For listings, click here.

Okay, okay, “The Beatles: Get Back” is technically not a film, but it’s a trilogy of films by Peter Jackson that intimately explores a month in the life of The Beatles. Even if you consider it a “miniseries,” the series is made up of three installments of at least two hours, including one three-hour-long episode. As someone who grew up listening exclusively to The Beatles and Paul McCartney, binging the eight hours that this series lasts in the lead-up to Thanksgiving was a great usage of my time, and fans of the Fab Four won’t want it to end.

“The Beatles: Get Back” is streaming on Disney+.

4. “The Mitchells vs. The Machines”

It feels like ages ago that the “The Mitchells vs. The Machines” had a trailer playing in theaters (I believe under a different title). This animated film has remained on my mind since it came out over the summer. There was something relatable about the struggle of a.) getting into a prestigious film school, and b.) telling your parents you want to get into the film industry. “The Mitchells vs. The Machines” is one of the sweetest films of the year with breathtaking animation.

“The Mitchells vs. The Machines” is streaming on Netflix.

I feel late to this party, but as someone who is not a fan of Lin-Manuel Miranda, I was surprised by how much “tick, tick… BOOM!” blew me away. It’s Miranda’s directorial debut, but you would not be able to tell while watching from the (expectedly) great music to some fancy camerawork while Andrew Garfield does laps in a pool. It may very well be Andrew Garfield’s greatest performance to date (yes, even better than another one from this year), and has a great soundtrack of theater power ballads that will be stuck in your head far after the credits roll.

“tick, tick…BOOM!” is streaming on Netflix.

Ever since NYFF, the ending of “The Power of the Dog” has continued to be mulled over in my mind. Its theme of masculinity is handled masterfully by Julie Campion. It’s a neo-Western that has some of the most breathtaking shots of recent years; right up there with “Blade Runner 2049.” Benedict Cumberbatch deserves a nomination for his absolutely brilliant performance that blows his recent appearance in “Spider-Man: No Way Home” out of the water. “The Power of the Dog” moves at a slow pace but is filled with subtleties that are rewarding to those who make it through. “The Power of the Dog” does not give off a loud bark, but rather, a gentle one. Its ability to spark conversation for hours after viewing speaks to the film’s true power.

“The Power of the Dog” is streaming on Netflix.

Despite how many good things came since I first saw “CODA,” including “The Power of the Dog,” “CODA” has remained my favorite of the year. Sure, it tells a very basic “coming of age” story about leaving the nest on the surface, but Sian Heder directs the hell out of a film with an authentic representation of the deaf community. Just watch the scenes where Emilia Jones’ character sings at her school or even the subtlety of a scene such as the one where Jones’ character is attempting to do homework in her dining room early in the film. Marlee Martin, Troy Kotsur, and Daniel Durant are all delightful, and Emilia Jones should get every role she desires. “CODA” is all-around one of the most heartwarming and heartbreaking films of the year. Watch it now.

“CODA” is streaming on Apple TV+.