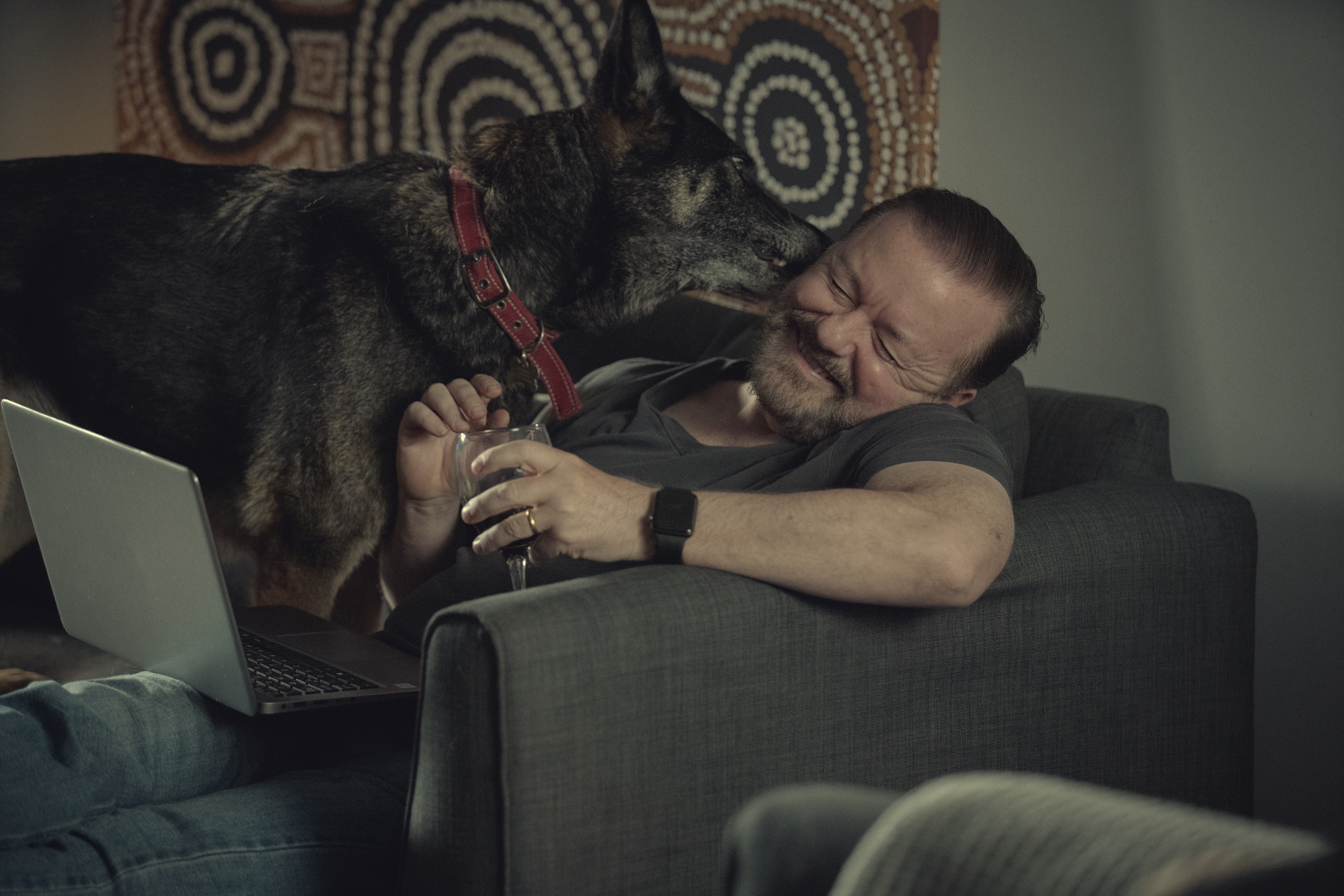 Televison on January 10, 2022 0Likes At The Movies
ShareTwitterFacebookInstagram

The equally beautiful and frustrating aspect of British television is how they usually feature shorter seasons, condensed episodes, and rarely overstay their welcome. Ricky Gervais’ “After Life” is the most brilliant work the comedic genius has taken on, and to see its final season come and go in the form of six 30-minute episodes is heartbreaking. Such progression was seen in the character of Tony (Gervais), and I just want more of this beautiful small-scale world that Gervais has created. Even if the third season of “After Life” follows a lot of the same structure as the previous 12 episodes, it benefits from the charm and humor that can make up for it. The third season of “After Life” is a shining achievement for Gervais that puts all of his talents on full display.

Love him or hate him, Ricky Gervais is one of the best minds in comedy. His bombastic views and very loose lips are prone to turn off some, i.e. a returning bit about Satan screwing those imprisoned in Hell from Gervais’ stand up routine can be spotted at the beginning of the finale episode, but it’s hard not to at least applaud the guts Gervais has to make jokes like that. Absolutely no one is safe, but those who know Gervais shouldn’t be surprised. Surprising, however, is just how athletic Gervais. A recurring bit revolves around a bet that Tony and Matt (Tom Basden) make that Tony wouldn’t win in any athletic competitions. Let me just say, we need more of Gervais running around in a tank top talking trash whether it’s in another season of “After Life” or whatever comes next.

But while there certainly are jokes that will have you asking yourself, “Did I really hear that?,” including one that Gervais wrote about Tourettes, he is that friend who you just can’t get mad at despite how terrible the things he says are. It’s his lovable smile and infectious laugh that will make you feel like you are going to Hell (and maybe even screwed by the Devil himself) as you let out a giggle at some of the jokes. For those who don’t know, “After Life” is a comedic show, but is also up there with Gervais’ heaviest subject matter (with “Derek”). “After Life” has followed Tony, a man who lost his wife, Lisa (Kerry Godliman), and is attempting to cope with that. It certainly doesn’t help that Tony spends a lot of his time drinking wine and rewinding the film on moments from Lisa’s life, including some tragically ironic moments where Lisa will talk about wanting people bringing flowers to her grave when she’s gone as Tony scoffs at the idea. The videos are constant reminders of how quickly things can come and go, but Tony has a little help from his friends to help him get through it.

Mandeep Dhillon was a wonderful part of the cast in the first two seasons of “After Life,” as her character Sandy played a big part in bringing out the humane side of Tony. Her absence is never really filled in properly, and it’s truly a shame that she didn’t make an appearance in the final season. Roxy (Roisin Conaty) is also notably absent in the final season. Her character is referenced, though unnamed, by the mailman, Pat (Joe Wilkinson), and never seen. While maybe not as notable as Sandy, Roxy also had a role in helping Tony through his grief, and having Pat work through relationship problems without actually seeing his second half was a bit strange, to say the least. Chalk it up to the pandemic, I guess.

Also in reduced roles are the dog, Brandy, and Anne (Penelope Wilton), who brought a lot of authenticity to her role as a fellow grieving widow. Tony and Anne’s conversations at the graveyard were some of the standouts in the previous seasons, but be that as it may, they really don’t share the bench very often in the third season. Whether it was an inability to get Wilton during the filming of the season, which did take place during the pandemic, or not feeling as though they needed the character, the bench conversations were missed prior to the final episode, which gives Anne a proper ending.

The whole crew of the town of Tambury is just perfect. While we see Tony make his way through all different parts of town, it gives the same small community vibe of the New York City blocks in “Do The Right Thing.” Familiar faces flood the screen throughout the third season of “After Life,” and the whole cast all fit into their places. No one feels miscast or out of place, making it a lovely ensemble to watch.

If you have seen the first two seasons of “After Life,” you will be able to recognize the structure of many of the episodes. This isn’t a complaint as much as it is a warning, as almost all six episodes contain a scene of Tony watching old footage of Lisa, one interview with a subject for the newspaper (which also follow a formula of their own), a heart-to-heart between two characters (usually Tony and someone else), a visit to Lisa’s grave (also reduced in season three), and banter between Tony and his coworkers. If it ain’t broke, don’t fix it, and “After Life” is a prime example of that. Just because the structure is the same, jokes are fresh and there are new situations that are comedic gold. A standout was the equal parts cringe-inducing and hilarious date between Kath (Diane Morgan), and a pretentious science teacher.

Going back to the comedic genius of Gervais, bits in “After Life” are usually recurring and sometimes play the long game with the payoff. There’s the athletic competition between Tony and Matt that continues for a few episodes while we watch Kath continually strikes out on her dates.

A joke that takes an episode to pay off revolves around one of Gervais’ favorite swear words, “c–t.” Kath is disgusted by his use of the word, saying it shows a “small vocabulary.” It’s a subtle setup only for Kath to end the episode by saying the word herself.

Equally hilarious are the subjects of Tony’s interviews. This went unnoticed when watching the first two seasons when they came out, but all of them are walking contradictions. There’s the self-published author who is eager to flaunt the 50 books she has published that makes no money, or the couple that run a swingers club à la the sex cult in “Eyes Wide Shut,” living by the “What happens in Vegas, stays in Vegas” mantra whilst also wanting to be interviewed for the newspaper.

“After Life” Season 3 is a bittersweet goodbye to this delightfully dark comedy. It’s not bittersweet because it was equal parts good and bad — all three seasons are superb — but the world (or fictional town) that Gervais built is one that is hard to say goodbye to. It’s a pretty common fact that British television doesn’t overstay its welcome, but can’t we make an exception?

“After Life” Season 3 will be available to stream on Netflix on January 14.