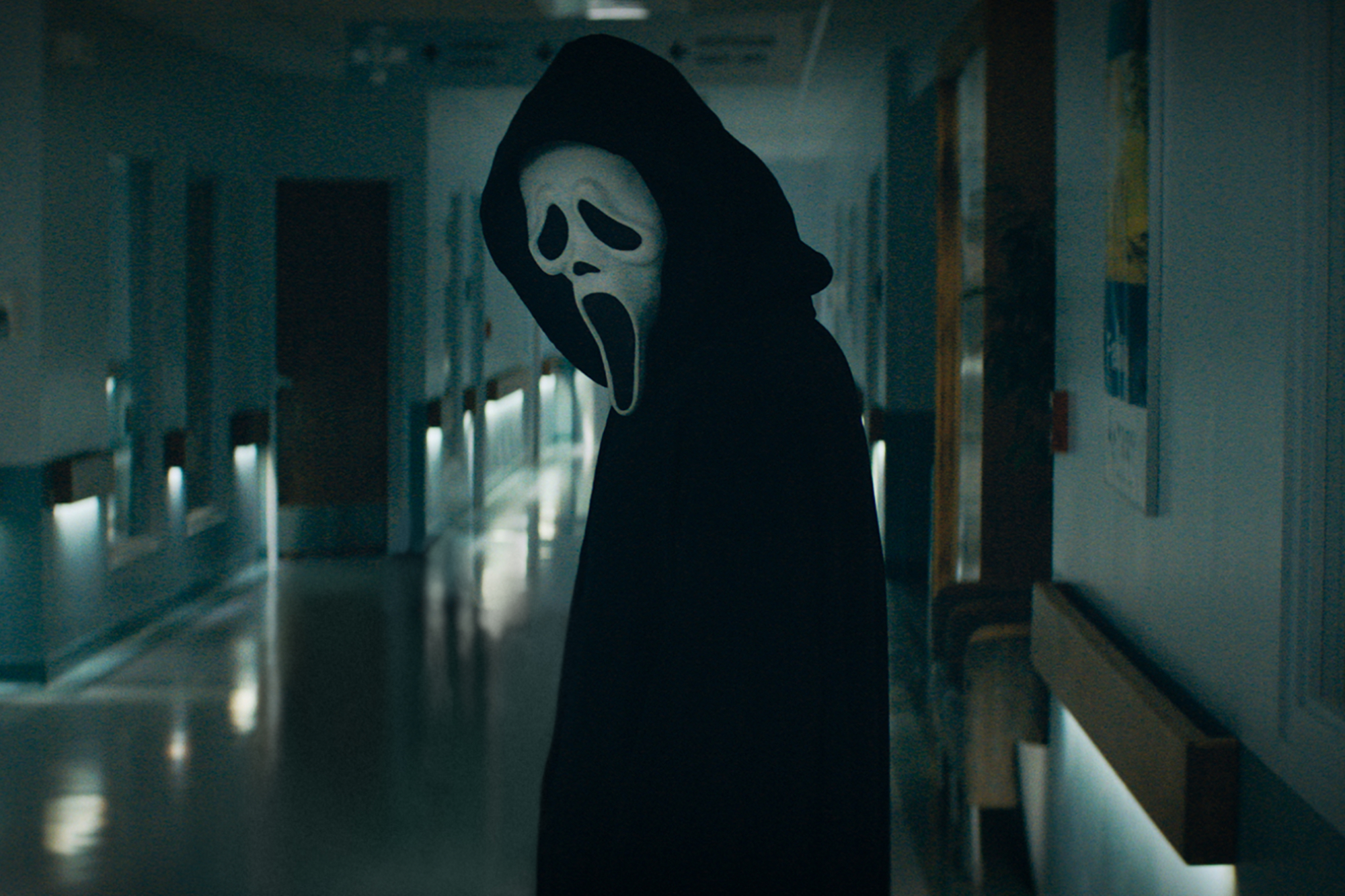 Movie Reviews on January 14, 2022 0Likes At The Movies
ShareTwitterFacebookInstagram

After 10 long years, the “Scream” franchise is finally back. The Woodsboro gang has reassembled, now as grizzled vets, intertwining with a fresh set of high school kids and a new Ghostface killer. But is “Scream” (2022) successfully able to serve as both a reboot and sequel, or “requel” as they call it in the movie, to usher in a new generation to the “Scream” franchise? Well, like Dewey (David Arquette) and Gale’s (Courtney Cox) relationship, it’s complicated.

To set the record straight, I am a big fan of the franchise. I even love “Scream 3,” which is usually towards the bottom of rankings of the entries in the franchise. So, expectations were modestly high while also being aware of the love of the original quartet. For example, the original trio of Sydney (Neve Campbell), Dewey, and Gale are never going to be topped. Perhaps that is unfair to future iterations, as is the case in the “Scream” TV series, but there was something lovable about all three. Maybe it was that their relationships and care for each other felt genuine, as is the case in “Scream” (2022), or the fact that they have had four movies to grow. Whatever the case, the reboot section of the cast doesn’t hit that same level. And sure, maybe no young cast could ever top the original, but the emotional stakes weren’t nearly as high as a result. Did I care about Sam’s (Melissa Barrera) fate as much as I did Sydney’s? Truth be told, no.

Jenna Ortega is the standout of the young cast from the second she is on screen. The opening sequence kicked off the film on such a high that the rest of the film fails to top. Melissa Barrera is our new protagonist, and she served that role honorably. No one will top Neve Campbell as the ultimate “final girl,” even as much as “Scream” (2022) wants to pass on the baton, but it wouldn’t be a crazy proposition to see Barrera carry another movie. Unfortunately, the surrounding cast is just as vital to a “Scream” movie as the main characters are, and aside from Barrera and Ortega, none of the other high school kids are too notable. Mason Gooding, previously seen in “Booksmart,” steals the show the most, as he’s got a knack for playing high school characters. Dylan Minnette is surprisingly good, which is likely a direct result of getting away from the writers of “13 Reasons Why.” Mikey Madison as Amber Freeman, Tara’s (Ortega) best friend, and Sonia Ammar as Liv, are both good, though underutilized. That word, underutilized, sums up the young cast. Even though the focus isn’t soley on the original characters, it also didn’t give much shine to the new kids on the block. They don’t even spend more than a scene at the high school, which was a bit disappointing. Mindy (Jasmin Savoy Brown) probably gets the most personality out of all of them as the new equivalent for Randy.

To avoid putting it off further, the original trio is as good as advertised in “Scream” (2022), and likely saves it from complete disaster despite their limited screentime. Neve Campbell still kicks ass, and her team-up with Courtney Cox is a notable highlight. David Arquette’s performance should be appreciated, as he still brought the earnest and lovable traits that Dewey always has had but with twist of age and experience. He does have the corny, “roped back in” sort of arc, but who can hate it when it’s Dewey? It’s hard to say it as such a fan of this trio, but their sparing usage is appropriate. Sydney is omitted for much of the runtime, but it revives the film in a way that few can when she does return. When she finally does grace the screen, it doesn’t feel like she has missed a beat. Gale has the same effect, and there is a lot that is said rather than shown in regards to Dewey and Gale’s history in between “Scream 4” and “Scream” (2022). Hopefully, if there is a sequel, these characters aren’t completely omitted. It sounds selfish, but this franchise does feel tied to them as much as “Halloween” is to Jamie Lee Curtis (and as the film points out).

For as much as “Scream” (2022) likes to poke fun at legacy sequels, i.e. “Halloween” (2018), “Star Wars: The Force Awakens,” it still falls into some of the traps of the latter. I’m also not entirely sure that they should get away with mocking “Halloween” (2018) for simply taking the name of the original film considering they missed the opportunity to call this “Scream” movie, “5CREAM.” I think there’s a joke about that in the movie, but how did they not take that opportunity? The fact that *no spoilers* almost everyone is related to some important character of the past feels, well, silly. The “Star Wars” sequel trilogy couldn’t get away from the Skywalkers, yet “Scream” (2022) can’t get away from its own skeletons. As the film likes to jokingly point out, Woodsboro is a small town, but there is probably one too many characters that are related to someone important. Hell, even Dylan Minnette’s character, Wes, is the son of Deputy Judy (Marley Shelton). Maybe that was common knowledge coming in, but I avoided most coverage of the film going in.

Now that “Scream 4” is 10 years in the rearview mirror, it felt as though “Scream” (2022) would have so much more to play with given all of the technological advancements society has made. I did see the first trailer, and the usage of the phone-controlled house locks was clever. If you go in expecting more than that, you will be disappointed. Sure, the Woodsboro equivalent of “Find My iPhone” is thrown in, but other than Chad (Mason Gooding) going through the relatable struggle of punching his passcode into his phone, the technology is an afterthought. That being said, I did not need Ghostface doing TikTok dances or the high school kids using Instagram Stories to relay messages, but we could’ve had an Apple Watch screw someone over while hiding or one of those Ring cameras.

The third act begins with warning from one of the Ghostface killers (yes, there are two). To its credit, the third act is cleverly brought right back to where the franchise began, but the twists are underwhelmingly revealed and felt rushed. One of the most fun aspects of the “Scream” movies is guessing who the killer is as the mystery unfolds, and it didn’t feel as though “Scream” (2022) held it in with any discretion. Sure, it’s not painfully obvious from the start, my money was on the wrong pair, but the clues are used to hit the audience over the head. How the pair reveals how they connected was silly enough, but that doesn’t even hold a candle to their ridiculous motive of “toxic fandom.” Look, if you want to attack the growing issue of toxic fandom, there is certainly a place for it. Over-protective fans of their beloved franchises are an issue, but for as divisive as “Scream 4” was, did people really call for it to be remade? And were Reddit boards the best way of our killers connecting? Wouldn’t a Twitter thread about awful sequels feel more 2022 than Reddit? The third act felt like a remake of the original, which is probably the point, but that still doesn’t take it fully off the hook. To give the final act some credit, the two killers do deliver their monologues well, and there’s a nice tribute to “Once Upon a Time… in Hollywood” in there.

Anyone who has seen any of the previous entries of the “Scream” franchise are aware of the meta humor. It’s been touched on a few times in this review, but the self-awareness almost reached the point of “Matrix Resurrections.” It’s not quite as egregious, the “Scream” franchise can keep making sequels due to its genre, but the talk about “requels,” reboots, sequels, and legacy characters feels exhausted by the end. It does lead to some fun mirroring of the original film, but how many times must we be reminded of the fact that franchises like “Friday The 13th” and “Halloween” have had way too many bad sequels? To reiterate, “Scream” doesn’t have the same issue, even five entries in. The characters in the original “Scream” also didn’t feel as paranoid as this cast of high schoolers. These guys are constantly keeping their head on a swivel while fighting over who goes up the stairs first.

Another thing people know about the “Scream” movies is that they aren’t really “scary” per se. There are jump scares, but an appealing feature of the movies is that they are capable of making you laugh as much as they can scare you. There are probably five or six fake-outs with the classic trope where a character opens the refrigerator or a door as what is behind it is hidden as the music begins to build suspense only for it to be nothing when they close the door.

On the subject of kills, it’s unfortunate that there weren’t any notable ones in “Scream” (2022). Not that another garage door kill needed to be topped, but it all felt the same of Ghostface popping out from out of frame and just stabbing his victims to death. Say what you want about the TV series, but I will always remember the chainsaw kill.

For as negative as this review sounds, it’s not that “Scream” (2022) wasn’t good, or even an enjoyable watch. It was a fun time at the theater, but it also could have done more, especially when tasked with the impossible of trying to create a trio as likable as the original three. It’s a better attempt at a reboot than the TV series was, but I also can’t say I am clamoring for another sequel that doesn’t feature the legacy characters. But it is just nice to have a “Scream” movie in theaters, as I never got to experience any of the others like this. To its credit, it doesn’t overuse the legacy characters, but it also didn’t focus enough on characters outside of Jenna Ortega, Jack Quaid, and Melissa Barrera. When another “Scream” movie inevitably happens, I will be rushing to get a ticket like any other fan of the series (so long we get more of the legacy characters). But please, just please, don’t kill Sydney or make her the killer.

The Good, The Bad & The Ugly of Andy Warhol’s Filmography