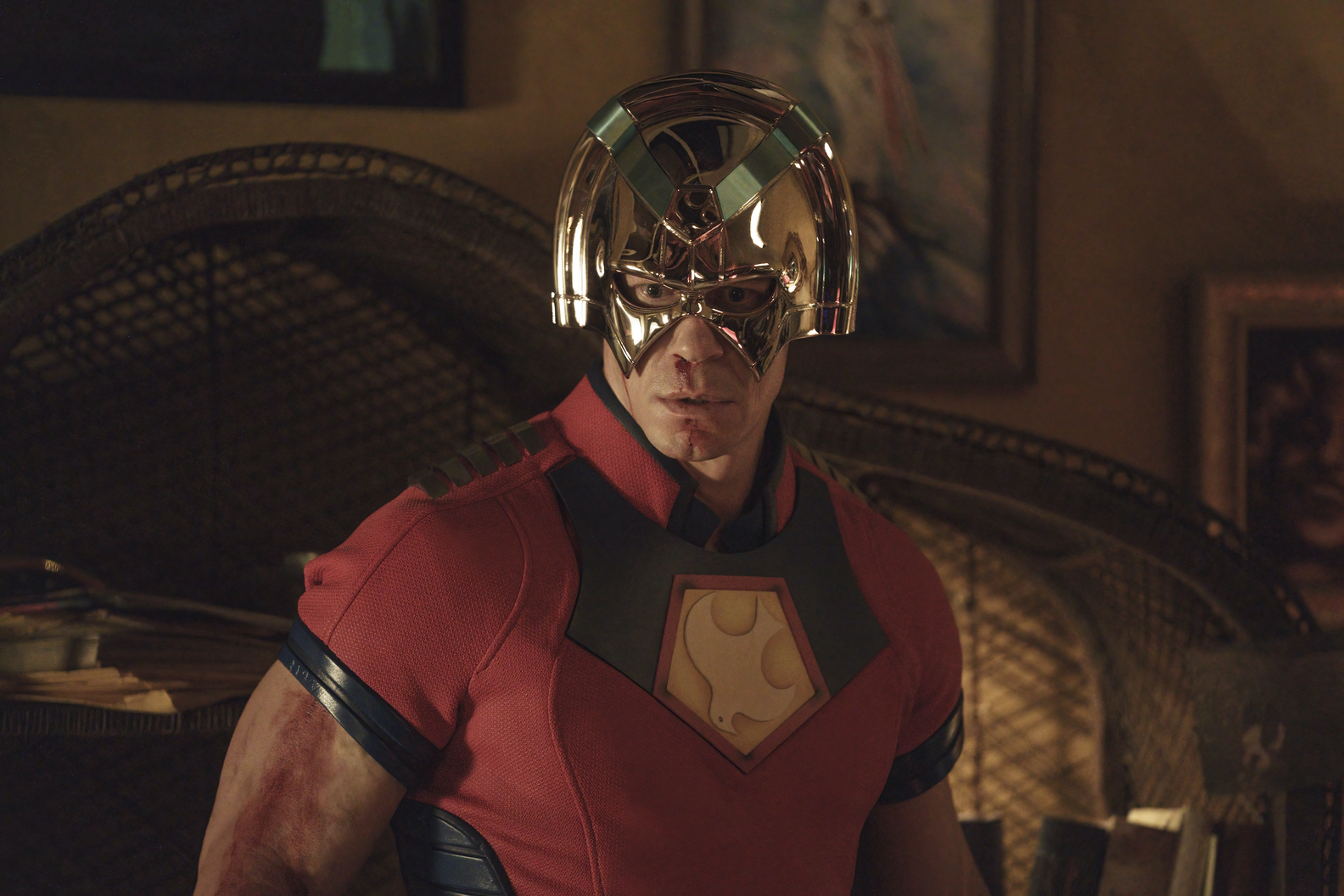 Uncategorized on January 14, 2022 0Likes At The Movies
ShareTwitterFacebookInstagram

Note: This review is based on the first seven episodes of “Peacemaker,” which were sent out to journalists. The review of the finale will come out close to release.

When “The Suicide Squad” came out in summer 2021, one of the obvious standouts was John Cena, as the Peacemaker, a somewhat racist but fully hilarious comic book character whose design perfectly fits Cena’s physique, as hard as that is to accomplish. The man you can’t see, John Cena, kills it in his first standout solo role of his career. Yes, he was great in “Blockers” and especially in Hulu’s “Vacation Friends,” but his leading man career has featured the likes of WWE Studios’ classics, “The Marine,” which “Peacemaker” co-star Robert Patrick also stars in, and “12 Rounds.” James Gunn’s continues to flourish, with his signature coarse style carrying over from “The Suicide Squad” into this TV-MA rated series. Peacemaker is also the perfect character to get a self-titled series that continues his story. A full movie wouldn’t likely have the same effect, but the first seven episodes are an exciting step in the right direction for comic book properties.

Unlike some of the other comic book limited series, such as the snore-fest that was “The Falcon and the Winter Solider,” “Peacemaker” is always fun easy to watch. It also never sets up expectations for its finale that it can’t reach, sorry, “WandaVision.”

Say what you want about John Cena the wrestler, but John Cena the actor has continued to grow since his second run in Hollywood over the last couple of years. His serious moments could use some work, but his comedy has continued to be his strong suit. Just see “Vacation Friends” where he combines wholesomeness with raunchy. We know that he can kick ass, just watch any one of his WWE matches, but he’s slowly beginning to become a steady force in comedy. It’s not a high-brow or complicated schtick that he has, he’s the hunk that ends up saying something offensive without an ounce of understanding how it could be offensive, but it’s simply what works for him. Why fix something that isn’t broke? That’s exactly why the WWE kept Cena as their top face for over a decade. No matter how many booed him, there were thousands more kids that outweighed the adults that were over his Superman-like character. Raunchy comedy has become that new persona for Cena, and keep an eye on his career without discounting him as a “WWE wrestler.”

Even if it appears to be nepotism, Jennifer Holland is a rare exception where yes, she may be the wife of series director James Gunn, but she does excel and justify her role in the series. Gunn doesn’t ask her to reach outside of her zone, and banter with Peacemaker (Cena) and Vigilante (Freddie Stroma) are some of the funniest moments in the series. She plays off the reserved woman who is secretly a badass so well while also maintaining the ability to be funny. Steve Agee returns from “The Suicide Squad” as John Economos, the seemingly impotent tactical support agent. While Agee may be the butt of many jokes, he takes it well. Above all else, Agee’s best comedic moments come in banter over a very practical debate such as the ending of “Butch Cassidy and the Sundance Kid.”

Vigilante, whose costume looks more accurate to Snake Eyes than Henry Golding’s in “Snake Eyes,” is like a more violent version of Peter Parker or The Flash in “Justice League,” who is even more desperate for attention from his idol (Peacemaker in this case). He’s that friend who is insecure about his ranking in the pecking order of the friend group.

Danielle Brooks was a surprising standout in the series. Her character, Leota, is placed on the team with some skeletons in her closet. No spoilers here, but her ties are revealed in episode seven. Brooks is also hilarious, with the right kind of ability to play off of any co-star that she banters with.

Given that it’s a miniseries, “Peacemaker” does have eight episodes to tell its story. Did each episode have to be at least 40 minutes long? Probably not, but at least they are never boring (the same cannot be said of those Marvel shows).

With a character like Peacemaker, it is pretty clear that the character is making a joke of right-winged side of America. I mean, Peacemaker’s dad, the White Dragon, is followed around with a bunch of goons in hoods that are eerily similar to a certain klan’s hoods. The series does attempt to tackle some of the character’s flaws like racism, misogyny, and corrupt governments with some weight, but none are taken head-on in a powerful way. “Peacemaker” is a Horatian satire as it doesn’t fully take on the issues beyond ridiculing them. Admittedly, it is hilarious and completely believable that a character like Peacemaker would call a waitress, “Sweet Cheeks,” and it’s the ineptitude to understand how that could be offensive that Cena portrays that makes the moments work. There are some racist jokes that would likely be offensive if anyone other than Cena said them. That’s probably not the best defense of it, but the context of the show assists more in that than anything else.

The action of “Peacemaker” is a mixture of over-the-top violent/gory and brutal hand-to-hand that occasionally sprinkles in some wrestling moves à la Cena’s WWE repertoire. It’s not like, the most innovative action sequences in all of comic book movies, but they serve the characters and their personalities. Jennifer Holland is surprisingly good in scenes where she fends off a toxic guy at a bar or is killing aliens.

What is learned through seven episodes of “Peacemaker” is that John Cena can absolutely lead a film or series when the right pieces are around him. He’s a classic drop-back quarterback, steady, but slightly boring by using the same schtick in every role and needs the right supporting cast around him. The right cast and surrounding are present in “Peacemaker,” and hopefully this is not the last we get of the character. The long-form series style suits the character, as a movie wouldn’t do enough justice to the complexity of the character. You really need to sit with Cena for eight episodes and his ridiculously-tight outfit and pet eagle, Eagly.