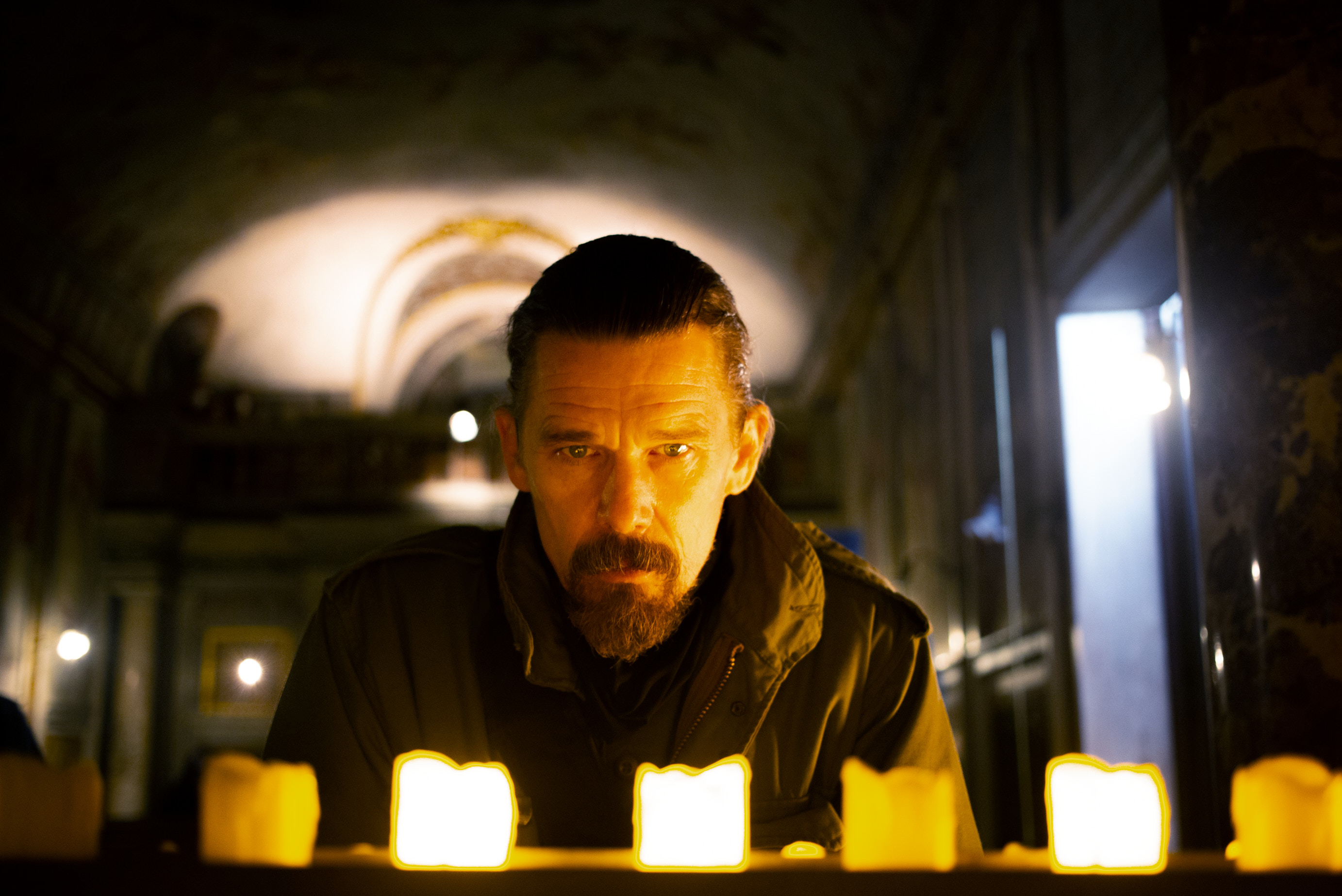 On Blu-Ray: ‘ZEROS AND ONES’ Starring Ethan Hawke

Movie Reviews on January 19, 2022 0Likes At The Movies
ShareTwitterFacebookInstagram

Note: “Zeros and Ones” premiered at the Locarno Film Festival back in August. It was released in limited theaters, on-demand, and other digital platforms on November 19, 2021, before hitting shelves with its physical media release on January 4, 2022. Thank you to Lionsgate for sending a copy of the Blu-ray over for this review.

If a “COVID movie” had a face, it would probably be “Zeros and Ones.” At least it is not nearly as horrific as “Locked Down,” if you can even recall that film. It was filmed during the height of the pandemic in early 2021 and released on HBO Max, and despite having stars like Anne Hathaway, Chiwetel Ejiofor, and Ben Stiller, it wasn’t even a good option on a six-hour flight to Iceland. Don’t be completely scared off by the 3.3/10 rating on IMDB, but you know how that saying goes, that you don’t talk about politics, religion, and money? “Zeros and Ones” goes against that and is filled with some interesting theological ideas that would be taken advantage of even better by Paul Schrader. In fact, much of “Zeros and Ones” feels like a Schrader film if he made a political thriller, and that’s not just because Ethan Hawke starred in “Zeros and Ones” and Schrader’s “First Reformed.”

Enter “Zeros and Ones,” a rare film that like “Locked Down,” fully acknowledges the pandemic that is still raging on almost two years after lockdowns began. Characters in “Zeros and Ones” wear blue medical facemasks throughout, take them off when talking to someone inside, and tuck them under their chin — I envy the generation that will look back at the film and wonder why they are wearing these masks. There are other scenes where FaceTime-like platforms and Zoom are used, and the streets of this city in Italy feel so desolate at times that it begs the question of whether that is intentional or due to “Zeros and Ones” being filmed in the middle of 2021. Early on, it did feel like most of the film was Ethan Hawke watching something on a device, but this can be forgiven because of the restrictions “Zeros and Ones” were under during production.

The Paul Schrader comparisons come in when “Zeros and Ones” bring in some religious artifacts. The Creation of Adam is flashed on the screen at one point, Justin, the rebellious martyr, is almost a God-like figure in his own mind. Towards the end of the film, Hawke states in a voiceover narration monologue: “The world is the hiding place of God. You know who said that? Jesus.” Considering that the film takes place in Rome, a city full of religious artifacts and history, a narrower focus on the religious themes would have been fascinating, and a different angle than Hawke’s role in “First Reformed.”

Ethan Hawke is one of the best actors working today, and there is true care on his part that glows on the screen. The film kicks off with a short message from him, and his belief in director Abel Ferrara feels genuine. Ethan Hawke plays a set of brothers, J.J., a soldier, and his rebellious brother, Justin. This rugged, and unkept performance from Hawke does get one scene to go completely unhinged. Hopefully, this is an appetizer to what is to come in “Moon Knight” later this year.

“Zeros and Ones” feels like an anti-war movie that gets lost in the art. During the credits, Hawke reemerges with another message, stating that he didn’t even understand the meaning of the film upon his first reading of the script, it’s relieving to hear that even he didn’t understand the film to the fullest extent, as the message isn’t stated loud and clear. Not that every film needs to be exposition-heavy and spoon-fed, but films like this and the recent “Sundown” both suffer from being too ambiguous for what feels like it’s for the sake of ambiguity. In turn, there are some cool shots of Rome or Hawke galavanting through the city.

To reiterate, “Zeros and Ones” is not nearly as bad as a rating of 3.3/10 would suggest. There’s a lot to like, Joe Della’s score is surprisingly memorable; guitar notes that sound like outtakes from the “Achtung Baby” recording sessions flood the film, and Ethan Hawke delivers as usual. It does feel like a product of the pandemic, however, which is not always an inditement. For one, the short runtime of 86 minutes, roughly 77 if you count when the credits begin, works in that the film doesn’t overstay its welcome, but it could have used another 10 minutes at the very least. Political thrillers are tricky on a good day, add a pandemic to the equation and you get “Zeros and Ones,” a film that simply feels incomplete.

“Zeros and Ones” is available on Blu-ray and DVD now.