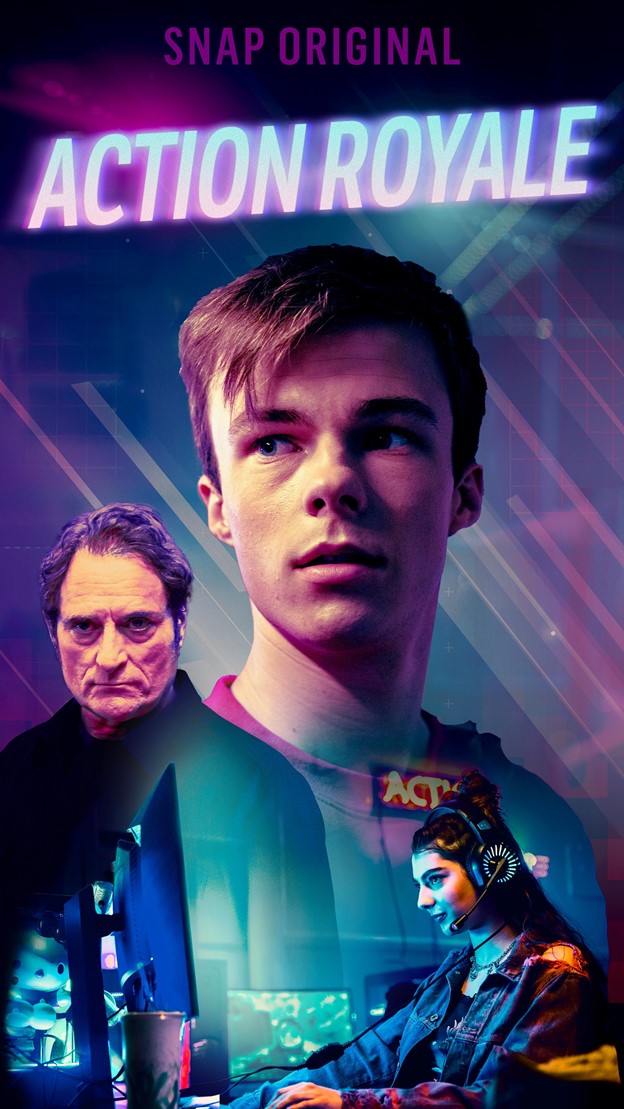 A gambling series involving video games for sport? Man, the future of technology must be explosive for the entire world. Gaming itself is already finding a place within the reality we live in, and perhaps it is a short amount of time before many become accustomed to its versatility in the personal (and professional) life.

Action Royale settles on this premise, making its mark with a fun, breezy good time. No matter what the casual viewer thinks, this writer almost became tempted to believe that Edgar Wright had his fingers all over the production of this series. But, no matter the case, it’s an adrenaline-filled, rapid experience with an enlightened perspective of how ambition can corrupt one’s gain.

The story follows Trilby (Nicholas Hamilton), a young teenager who decides to take matters into his hands as his collapsing father continues to ramp up his gambling dues owed to the cold-hearted Jeno (Kim Coates). He enlists his competitive gamer friend Reggie (Haleigh Hekking) to win games in an underground gambling gig to pay off his father’s debts. Despite succession in earning money and paying off the tab, Trilby and Reggie become a part of a dangerous world where obstacles are hurdled towards them one after another in their attempts to achieve ultimate victories.

The story develops slowly but surely over all the episodes in the first season. Reggie is a fierce competitor, but she wants to start working on her future by attending college. Trilby intends to cover up his father’s bill, despite dealing with the consequences of gambling and how it impacts his relationship with Reggie and his family. It all works out swiftly as the episodes push through the rapid computer action as the gamers challenge one another onscreen while recognizing the burdens of this business.

The tremendous subtle details about Trilby’s obsession with trying to make amends works out phenomenally as the series progresses. Instead of building towards his future, his actions become more evocative of his father. It’s constantly binging on the progression of how much money is made, no matter how illicit the activity is. Reggie’s presence brings him that stability, so he doesn’t lose control. Jeno’s darkened presence and other factors give the screen vibrance. Kudos to directors Maria Juranic and Igor Martinovic for maintaining a sturdy path leading to the conclusion of Season 1 and leaving a suitable cliffhanger for whatever comes next.

The only significant issue with the series is not its editing or characters but the time for each episode. Sure, the six minutes for each episode flies by like the snap of one’s fingers, but it doesn’t allow much to resonate with the characters. Digging deeper into Trilby’s mindset for each obstacle would’ve been a great track to explore. Then again, if Snapchat has these time constraints, it’s not the most terrible thing.

All in all, Action Royale is a fun, lively time and well worth checking out for anyone who pops on social media for a living.