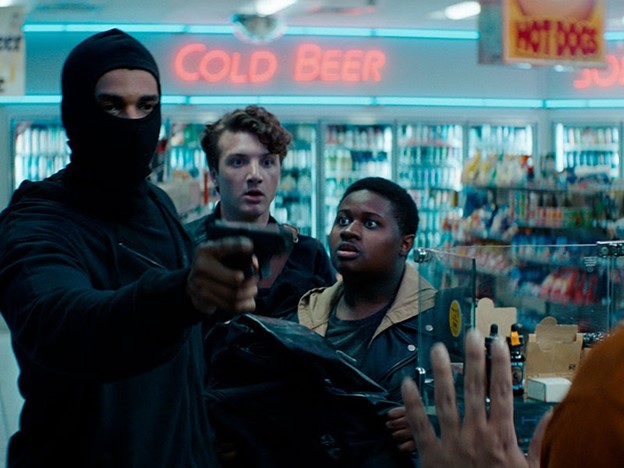 Ah, the age of teenage hijinks movies has not fallen out of grace. It was only so long ago when American Pie (and the infinite sequels) pushed the absurd limits of how teenagers wish to lose their virginity in a night (or at a party). And many have seen some excellent repeats of this situation in Blockers, Booksmart, and even Good Boys. This time, we get to ride along with Supercool, and it tries very much to live up to the title in a comedic yet confounding direction.

Perhaps there’s always something at heart when telling the usual teenager lust story-adding fresh ingredients spices the genre up. Heck, Freaky had a teenager swap her body with a mass murderer, and she had been dealing with insecurities about her high school crush.

Supercool deals with a timid teenager Neil (Jake Short), who draws comics to pull himself away from reality. He has a best friend named Gilbert (Miles J. Harvey), and Neil continues to pine over pretty Summer (Madison Davenport). Summer is having a birthday party, and once he meets with her to ask for an invite, he embarrasses himself in front of the whole school. Hurt and distraught, Neil heads home to hideaway. But once Gilbert tells him to make a wish at 11:11 pm (ah, the metaphors of Joker and Us strike!), he does and wakes up the next day as a much hotter individual (that’ll last a certain amount of time).

So now, he’s going to attend Summer’s party, and along the way, it’s a wild night of festivities. And by that, it’s from meeting a guy named Jimmy (Damon Wayans Jr.) and doing some wacky stuff from robbing a gas station owner to a wild police chase scene to Neil’s ludicrous sexual imagination. The cast is having a blast referencing Ace Ventura or crawling through the underground or nods of racism with the cops. So, no harm, no foul, right?

It never kicks out of first gear, becoming more of an exercise in unraveling what interesting direction all the characters go. Yeah, it’s hilarious, but it doesn’t get much more weight other than a guy trying to talk to the girl of his dreams. Or how Jimmy and Gilbert, at one point, shoot themselves to blame an Indian guy Apu who runs the gas station. Maybe we should all get our wishes at the time specified to make something more superb.

The ending does make up for some of it when Neil truly addresses himself, becoming more sympathetic than his constant awkward demeanor. It reminds us that honesty is the best gift anyone can ask for, and sometimes it may win the hearts of your crushes.

Supercool has a solid foundation but fails to capitalize on much of them. But, if one can have fun for 91 minutes with all wacky action and the teenager love, then all is cool enough.

MANCHESTER BY THE SEA