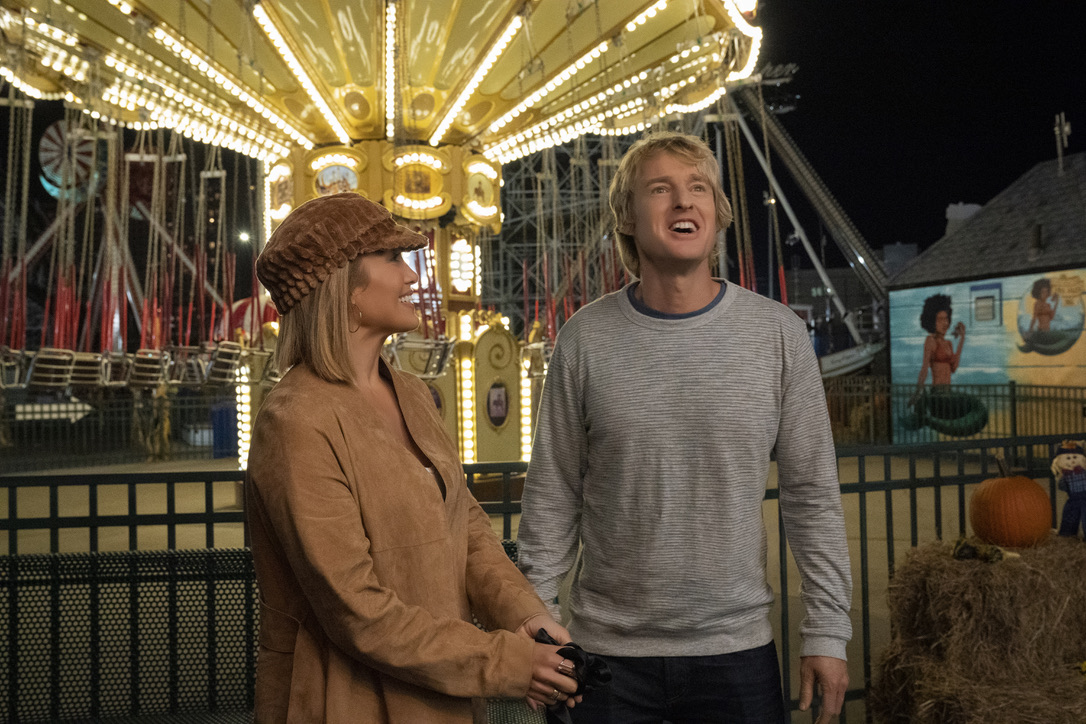 ‘MARRY ME’ Review: Owen Wilson and J Lo Tie The Knot in a Surprisingly-Endearing Rom-Com

Movie Reviews on February 10, 2022 0Likes At The Movies
ShareTwitterFacebookInstagram

When the news of a rom-com starring Owen Wilson and Jennifer Lopez first broke, I’m sure all most people could say was, “Wow!”. But alas, a romantic comedy that is a fairytale story about a celebrity and average joe couple that is thrown together amidst strange circumstances actually works pretty well. Is “Marry Me” an attempt at humanizing celebrity figures? Or is it a fairytale that gives hope to all of us “normal folk” with the celebrity of our dreams (the ball’s in your court, Kaitlyn Dever)? The answer isn’t really clear, but as a rom-com alone, “Marry Me” doesn’t reinvent the wheel and is exactly what you expect with a little more heart than expected going in.

In case the trailers didn’t give away the synopsis (and the whole movie), “Marry Me” follows Charlie Gilbert (Owen Wilson), a divorced father who ends up marrying pop star Kat Valdez (Jennifer Lopez) after a freak incident at one of her concerts. Kat’s fiance, fellow pop star Bastian (Maluma) is caught cheating with Kat’s assistant right as they are about to get married on stage. Acting on impulse, she marries Charlie after seeing him with a sign saying “Marry Me,” which is also (conveniently) the title of the hit song Kat and Bastian released.

It goes without saying that the entire plot of the movie is nonsensical. For one, the crux of the plot could easily be broken if Charlie’s friend who takes him and his daughter to the concert, Parker (Sarah Silverman), just put the sign down at her feet or held it in between her legs like a normal person as she took her phone out to record. And also, being that “Marry Me” was the name of Kat and Bastian’s new hit song, why was Charlie the only one in the middle of the crowd to have a sign saying that? It seems a little weird that no one else in attendance would have a similar sign, but I digress. In fact, the most realistic aspect of this scene is seeing the security guard in the frame of someone’s phone as they record the events unfolding.

Charlie is the “doing-his-best-but-recently-divorced” dad. His daughter, Lou (Chloe Coleman), is at the age where kids don’t want to walk to school within a one-block radius of their parents, ironically Charlie works at the school Lou goes to, and simply doesn’t find Charlier “cool” (though is going to a J Lo concert, “cool”?). I guess nothing says “uncool” more than being a math teacher and the leader of the math club called the “Pi-thons” whose slogan is: “You may be good at football, you may be good at track. But when it comes to math clubs, you better watch your backs!” and the nature documentaries Charlie watches over dinner being the furthest he travels. As stated, Charlie is recently divorced, and to make it weirder, we actually see his ex-wife at one point, who I don’t believe says more than a word than to simply never show her in the flesh and have one of those classic scenes where Charlie stares at an old photo wondering what once was. It’s as if there was a subplot about Charlie and his previous relationship that was going to be explored but was dropped in favor of more Jennifer Lopez.

We all know what to expect from an Owen Wilson performance. You get some gawky looks, a few dry lines, and a few variations of him saying “wow.” But, for as conventional as his role is, Wilson is actually quite endearing and will make you chuckle on more than one occasion. Owen Wilson is one of the few actors that can seamlessly pull off an impotent dad who is just doing his best under tough circumstances. It’s quite obvious that someone like Charlie does not fit in with someone like Kat, but Wilson’s performance, full of putting himself down and awkward dancing, works for what the film delivers. “Marry Me” is not a layered character piece, and none of the characters should be expected to be anything more than they are.

On the complete other side of the spectrum from Charlie is Kat, the celebrity who just doesn’t know how good she has it. Like most of these stories, Charlie at one point brings up the fact that Kat can’t plan anything for herself, and he challenges her to do things by herself without the help of her posse. I’m not an expert in Lopez’s filmography, I remember that she did that “The Boy Next Door” movie, but she’s serviceable in “Marry Me.” In all fairness, she’s playing a celebrity who is a little bit out of touch with the real world, and “Marry Me” attempts to humanize that part of Kat. Yes, celebrities are humans, and I completely understand that (look no further than the moment where Charlie tells Kat to call her when she’s lonely, only for her to immediately call back), but it sometimes felt cheesy more than anything. Somehow, in a romcom, it was these moments that made the film feel cheesier than the actual romance between Wilson and Lopez.

I quite liked John Bradley in “Moonfall,” even if his character work was nothing special. He works in his role as Kat’s righthand man, but wherein “Moonfall” he felt like a stand-in for Josh Gad, he feels like an attempt at making a role like Stanley Tucci in “The Devil Wears Prada.” He does bring some levity and humor, but you’ve seen his role a thousand times over as the person close to the girl who doesn’t think that someone like Charlie could ever live up to the (questionably) high standard of Kat. But by the end, the two will come to some sort of understanding and he’ll be rooting for the underdog.

Most of the performances work in “Marry Me.” However, the one that does not is Jimmy Fallon, who is likely only in here because of the NBC-Universal connection. He riffs on Kat as an influencer — which is ironic coming from someone who participated in the “Imagine” video — and even though all of his lines are written as knocks against a fictional character, he wasn’t needed and it felt unnecessary, especially in more than a one-off cameo. Fallon was cool in 2014 when he kicked off his “Tonight Show” run with U2, but he has lost so much steam and appeal since.

“Marry Me” is an overachiever in that it’s completely watchable and a cute story. It goes exactly how you predict it’ll go and is devoid of any twists and turns. And while it’s not as if Owen Wilson and Jennifer Lopez have Ethan Hawke and Julie Delpy in the “Before” trilogy-level chemistry, the lack of sparks between two people who are “fish out of water” in their own separate worlds works because of the story told. “Marry Me” is a great time for anyone, not just couples, and does have a perfect release date as Valentine’s Day rolls around. Just don’t listen to the titular song too much.

Universal Pictures will release “Marry Me” on February 11.