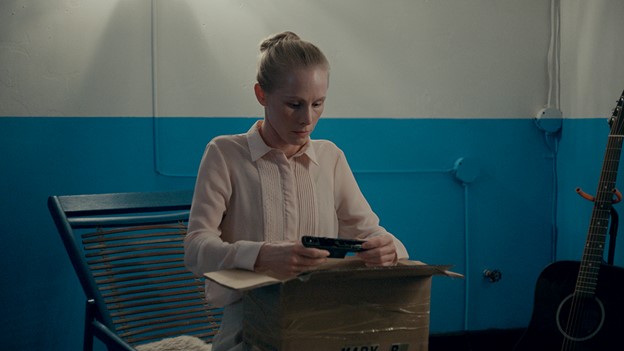 Have you ever had a tedious job and decided to give up and walk away from everything until an unknown individual comes out of the blue to offer a chance to win a contest?

Not precisely the soundest situation, but it’s here, called Stanleyville.

In his directorial debut, Maxwell McCabe-Lokos takes a break from the acting hemisphere to dip his toes into an odd satire revolving around a group of people battling over an orange SUV in a situation of real-life or death. Jeez, much inspiration from The Hunger Games or The Hunt, or Wes Anderson?

The feature follows Maria Barbizan (Susanne Wuest) giving up her job, marriage, and personal belongings before sitting on a bench at a mall. Then, an older man (played by Julian Richings) offers her a chance to play in a game for this prized vehicle. So, she tags along and meets Felicie Arkady (Cara Ricketts), Andrew Frisbee Jr. (Christian Serritiello), Bofill Pancreas (George Tchortov), and Manny Jumpcannon (Adam Brown). Trust me; it gets more ridiculous beyond these name attachments. All five must play in trials to see who will walk away as the victor. Oh yeah, and the competition promises “ferocity of true primal conflict.”

It cannot be stressed enough about how slow this movie takes to start winding up until the second half kicks in. The snag in this structure, like with The Hunt, is that the characters get almost zero rhyme or reason for stumbling upon this opportunity. The stakes are prevalent, but it doesn’t rev up to astronomical heights even when bound to a rather impressive setting. So why should folks sympathize with these actors’ personas onscreen when they provide shallow utility outside of their eccentric expressions and commitments?

The light-hearted tone starts to kick in once the trials become more preposterous such as trying to hold one’s breath and the bringing of earlobes. It almost stretches away from the typical comedy and drama to a much darker thriller. Wuest’s performance amplifies this aspect with her peaceful state of mind but subtle darkness behind her face. No amount of money can appear to halt the process of death, everyone learns, and McCabe-Lokos weaves in the themes of consumerism and title possession nicely, exercising how one’s entitlement can leave them genuinely suffering in the end.

But this movie is a severe oddity in that it tries to juggle a lot of moving parts yet cannot find what to do with them. It becomes highly puzzling when the first task is to blow balloons until they pop in under a minute, but it gets glossed over by the half-hour mark. So why not simply jump into studies that say “yay” to “we regret joining this competition in its entirety?” So much confusion and wackiness arise that you may be better off taking a nap.

It’s a merely passable feature thanks to some humoring and thrilling moments, but it does tend to leave one hanging for a proper resolution by the time the credits roll. Even when capped off at under 90 minutes, the fuel in this tank doesn’t start burning until the second half.