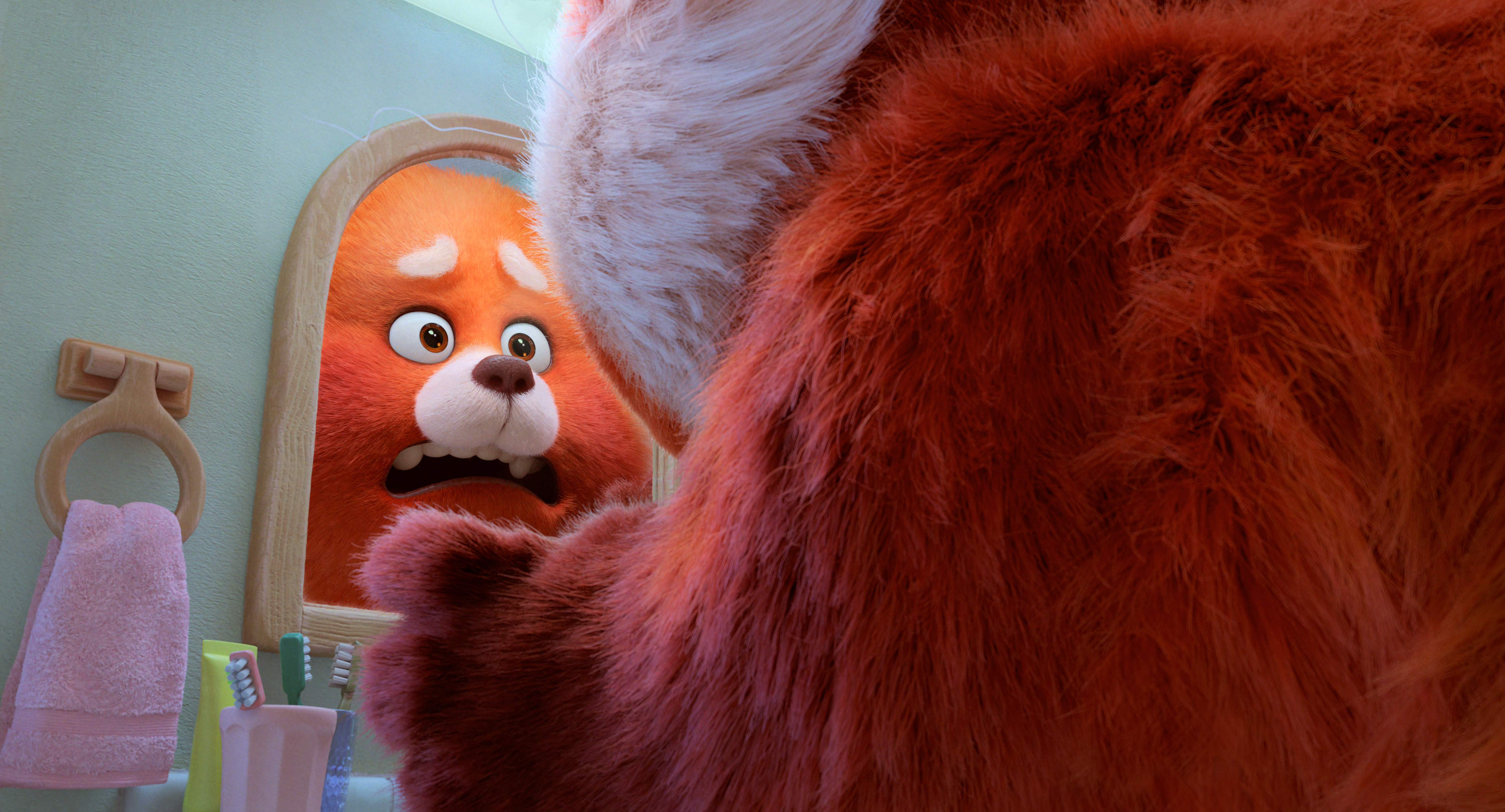 Review: ‘TURNING RED’ Is A Throwback to Boy Bands and Flip Phones

Movie Reviews on March 7, 2022 0Likes At The Movies
ShareTwitterFacebookInstagram

What a pleasant surprise it was to come to find out that Domee Shi, director of “Turning Red,” also directed “Bao,” the animated Pixar short (before “Incredibles 2”?) that featured a baozi child being eaten by his mother. When those delicious dough treats showed up in “Turning Red,” it triggered both a memory and a connection to the experience of watching that shocking moment in “Bao.” But both “Bao” and “Turning Red” share more than just their director, they warm your heart while telling a poignant story. Both films deal with the idea of parents not being prepared to let their children flee the nest, even if they both do so in very different ways. “Turning Red” doesn’t feature the existential dread of “Soul” or have you wanting to have kids of your own like “Inside Out” did (Oh, that’s just me?), but it does tackle something that we all encounter in one way or another: early-teenage angst. “Turning Red” is a film that has laughs, moments to cry, and everything in between that makes Pixar films so unique. Add to the fact that it revolves around an Asian family, something noticeably absent from other Pixar films, and you get one of the best Pixar films to date.

“Turning Red” follows Mei (Rosalie Chiang), a 13-year old girl who is beginning to come of age thinking about boys, wanting to see 4 Town, the film’s equivalent to an NSYNC or BTS-type boy band. Despite this, it still feels like her slightly-overbearing mother, Ming (Sandra Oh), has her hands — or paws — wrapped around her. Think “overbearing” is being overdramatic? After seeing Mei’s diary of drawings of the local convenience store clerk, she drags her daughter to the store and angrily confronts the kid in front of Mei’s classmates. This is every child’s nightmare, and this is not the only instance of something that almost everyone can relate to in “Turning Red.” After a night of nightmares, Mei discovers that she becomes a giant red panda whenever she triggers any emotion too strongly, resulting in her having to get through her day while being as stoic and emotionless as Sofia Coppola in “The Godfather Part III.”

The story of “Turning Red” is a strong representation of a couple of important themes. There’s the coming-of-age aspect which ultimately does tie into the flying the coop story, meeting family expectations (something “Encanto” also tackled effectively), and of course, puberty. It does feel mature that Pixar is tackling these topics; after all, much of their target audience is younger children, and like it or not, these are things that happen in everyone’s life. But even still, adults or those a bit older than the target audience can relate and appreciate. As a self-proclaimed “mama’s boy,” though even I remember the days of being embarrassed to walk in the same direction as my mom at our local Target at this age, the feeling of insurmountable weight being placed on your shoulders is relatable. No friend (boy or girl) is good enough, and mothers want to have a pristine image of their children and watch them fulfill both their own and their kids’ dreams, despite the flaws that we all have. While Ming can seem overbearing, her not wanting her only child, who spends all of her afternoons looking after her family’s business and whatnot, is understandable. Plus, Mei is 13, meaning her life is going to drastically change whether or parents like it or not.

We all remember our first big crush and the embarrassment attached to ever saying his or her name out loud. Mei’s struggles with this are handled maturely by director Domee Shi, who does a great job of representing the early 2000s and childhood. Not everyone is from an Asian background, which usually comes with very, very high expectations, but surely most have felt like they let their parents down. Is it just me or is it more embarrassing to admit to your parents that you made a mistake than anyone else on the planet? I still remember being afraid to admit my mistake to my parents in regards to choosing a college back during my freshman year, but I digress.

But for as heavy as the subject matter of “Turning Red” can seem, it is, in true Pixar fashion, quite funny. The morning that Mei discovers her transformation, she stumbles her way through the bathroom while attempting to keep her mother from walking in. It’s highly reminiscent of the scene in “The Amazing Spider-Man” where Peter Parker (Andrew Garfield) has a similar fiasco in his bathroom. Abby (Hyein Park) serves the role of comic relief quite well. It’s the quick zingers that do it for me rather than any sort of memorable line.

Sandra Oh is fantastic as Ming, but don’t let Orion Lee’s understated performance go unnoticed. Lee plays Mei’s father who may seem like the ultimate “beta” male, rarely giving his own input or speaking any words in the opening half-hour or so and respecting Ming’s raised hang when she silences him. But below the surface is a father who does really care about Mei. It’s not until the last act of the film that he gets any sort of prominent role, but it’s the little details and nuances of watching him in the background that make him worth noting.

Nothing screams early-2000s like flip phones and NSYNC-like boy bands. Not only that but Miriam (Aav Morse) slips Mei a bootleg of 4 Town, which feels like a rarity nowadays (with the exception of U2). One of the big plot points revolves around Mei and her friends wanting to get tickets to 4 Town, which cost $800 (Hey, you could get one Paul McCartney ticket for that price!); an upsetting reminder of a time when you didn’t get charged an extra 50% on every ticket and could actually get face value prices.

Watch “Turning Red” because it’s a funny, mature, and very thought-provoking film from Pixar. It doesn’t require the tissues that “Inside Out” did — which remains the golden standard for Pixar — but it does tell one of the most personal stories to date. Everything works from the voice cast, the animation style, even the themes are handled in a way that is digestible and funny. It’s a shame that “Turning Red” won’t be in theaters, as it does deserve that, but since it’s on Disney+, please pause your rewatch of whatever MCU movie you’re on or “The Book of Boba Fett” for an amazing 90-minute escape. Whether you’re a pre-teen that is yet to see the changes to your body that Mae does or a college student prepping for your time in the real world, “Turning Red” offers a story that will hit you on some emotional level. You win again, Pixar.

“Turning Red” will be available on Disney+ on March 11.