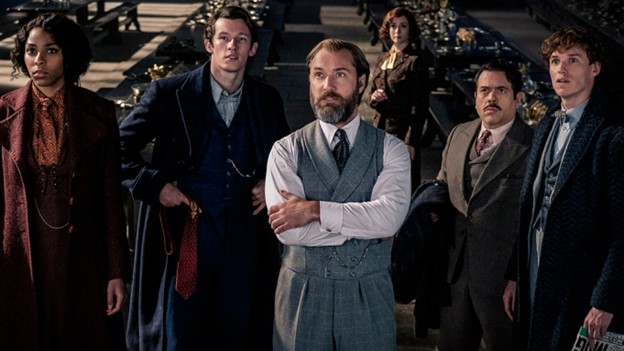 Draw your wands and cast a spell that (hopefully) won’t backfire on you years from now.

At the beginning of this month, to celebrate a (late) 20th anniversary of the Wizarding World, yours indeed ranked all eight Harry Potter features, recalling the beautiful moments that brought audiences close to the magical wizarding world and Harry Potter’s adventures. Every feature felt substantial and left a mark on our childhoods as multiple generations read J.K. Rowling’s ensemble of books translated to grandeur on the big screen. Once the Deathly Hallows Part 2 concluded, it was the end of an era for our golden trio (Harry, Ron, and Hermione), and Warner Brothers could bask in celebrations for years as the mighty franchise whipped up $7.7 billion and several nominations for Academy Awards.

Then a few years later, Warner Brothers announced Rowling was writing a script based on her book Fantastic Beasts and Where to Find Them, and the Wizarding World continued to expand its lore and characters once more by diving into the past before the adventures of Harry Potter.

It got off to a strong start, with the first movie amassing $814 million worldwide with positive word-of-mouth in 2016. Its sequel, Crimes of Grindelwald, disappointed many in terms of storytelling, tension, and becoming overburdened with setting up sequels (joining the likes of Age of Ultron and Batman v. Superman). Nonetheless, it still earned $655 million worldwide (even as the lowest-grossing installment of the Wizarding World).

But we’re in a very peculiar position now as the threequel Secrets of Dumbledore has not only gotten off to a rough start ($20.1 million Friday), but the current behind-the-scenes matters may have doomed its longevity. We have middling reviews, but it is coupled with the continued growing disdain over the previous mythology-heavy sequel, controversy over J.K. Rowling’s transphobic commentary, the casting of Johnny Depp, and his removal (due to allegations of domestic abuse by his ex-wife Amber Heard), and the recent incidents with Ezra Miller’s behavior behind the scenes and outside in the world.

And to top all those woes off, the continued drop of faith in the people executing the products has led to lower box office totals and net earnings. History has shown us that with the Terminator reboots, Divergent, and rebooted X-Men series, it was three strikes, and you’re out for the latest entry in Fantastic Beasts. The only things that pique interest for this latest feature are nostalgia and Mad Mikkelsen taking on the role of Grindelwald. However, Mikkelsen is not a star-making attraction (despite his incredible performance as an actor), and the nostalgia continues to wear off each time Warner Brothers and Rowling cannot address the obfuscating timeline between this series and Harry Potter.

Furthermore, the alienation caused by the problems and (supposed) love story between Dumbledore and Grindelwald has made Fantastic Beasts its own thing. Outside the magic, the series doesn’t come close to the dark and maturing thematic and evolution of the Harry Potter films. The latter resonates as a steppingstone for Harry and his friends as they continue to face monsters and tricks until the final showdown with Lord Voldemort. In Fantastic Beasts, it’s a recurring battle between Dumbledore and Grindelwald that has lost flavor and become drawn out.

Warner Brothers still plan to make a fourth and fifth entry, but depending on the reception of Secrets of Dumbledore, that may not even occur. Producer David Heyman confirmed they haven’t initiated writing for the next one as it is now dependent on what comes next. The studio knows it can’t monetize an incomplete series. So, this will attempt to act as something resembling an ending and a “roll the dice” predicament for the Wizarding World’s future.

Does it hurt the Harry Potter branding? Not necessarily. The films will remain intact because of their potency and faithfulness to the books. Still, their interconnectedness to the Wizarding World may push diehards to try to omit the collapsing nature of Fantastic Beasts. Even when you once launch as one of the best franchises in history, the postliminary antics pulled can easily lead to a souring taste and then continued downfall to where only the superlative ingredients remain of the IP. (Ask the Matrix film series for reference too.)

WARNER BROS. RELEASING ALL 2021 FILMS IN THEATERS AND STREAMING SERVICES SIMULTAENOUSLY IS A DOUBLE-EDGED SWORD