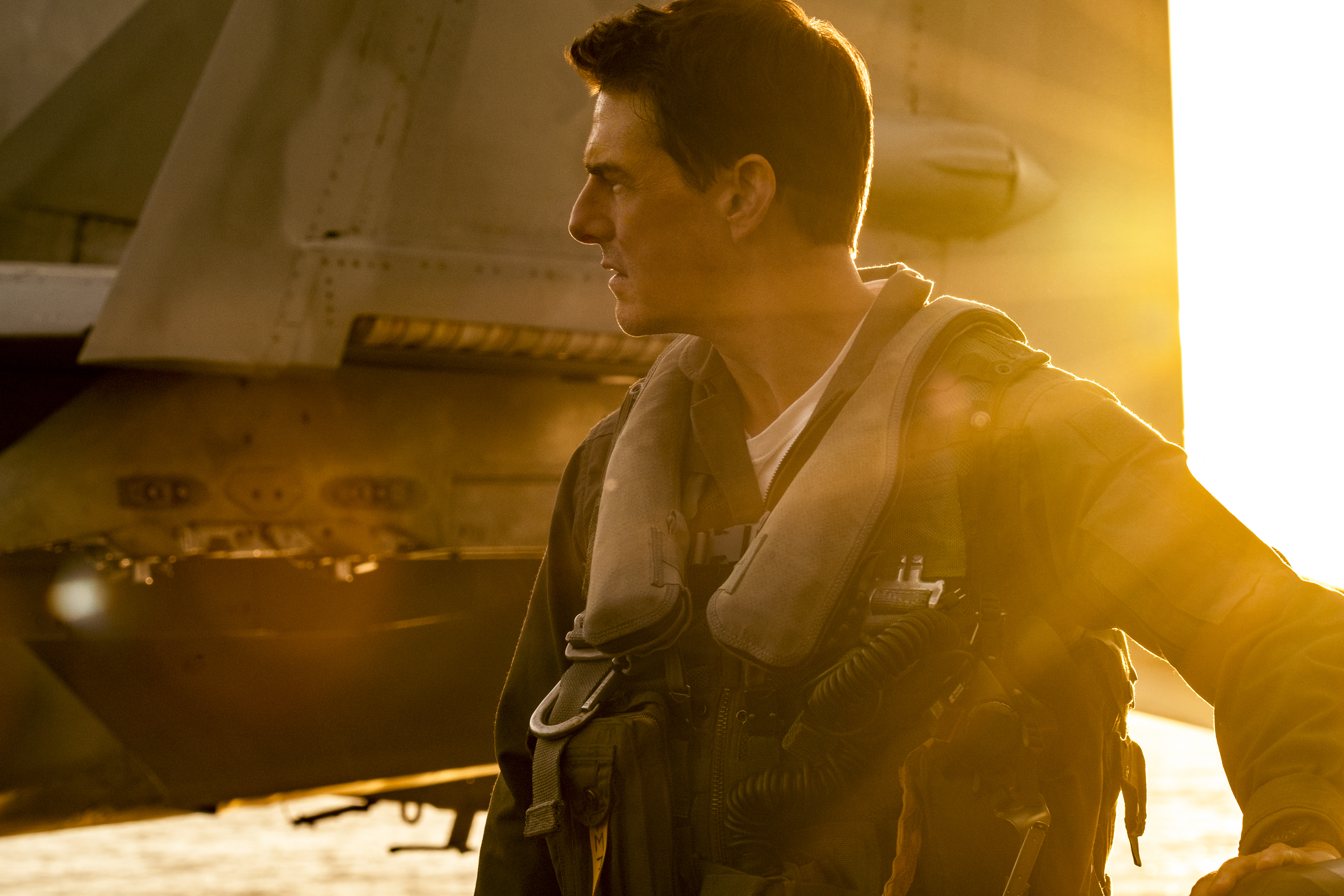 Movie Reviews on May 20, 2022 0Likes At The Movies
ShareTwitterFacebookInstagram

Leave it to the never-aging Tom Cruise, leader of the near-flawless “Mission Impossible” franchise, to do a legacy sequel that is more than a rehash of the original story for a new generation. With “Top Gun: Maverick,” Cruise and co. not only match the cheesy 80s goodness of the original “Top Gun,” they top it by bringing the franchise into the 21st century with superb performances and stunning aerial sequences that will send chills down your spine and pump more adrenaline into your veins than Jason Statham has to in “Crank.” Yes, “Top Gun: Maverick” is still about hot guys being cool and pissing contests, but the sequel has a strong emotional core that is far easier to take seriously than its predecessor. Sorry, “Haloween” (2018) and “The Force Awakens,” “Top Gun: Maverick” is a legacy sequel done right.

The plot of “Top Gun: Maverick” is no more complex than Pete (Tom Cruise), or “Maverick,” is still the same rebel that viewers saw in “Top Gun.” Never ranking higher than Captain (due to his own doing), “Maverick” has become somewhat of a disenchanted figure in the Navy. Be that as it may, “Maverick” is brought back into the fold due to Iceman’s (Val Kilmer) wish and is tasked with heading a dangerous mission with a number of Top Gun graduates including “Goose’s” (Anthony Edwards) son, Bradley (Miles Teller), or “Rooster.”

You likely can guess where the story goes, and you’d likely be right, but that doesn’t take away from the charm of “Top Gun: Maverick.” It’s not a complex story that will have you pondering the meaning of life, but it has the same undeniable charm as its predecessor within the confines of a 2022 film. Not only does it look a lot better — of course, due to the technological advancements — it tugs at the heartstrings with the addition of “Goose’s” son.

And of course, what most viewers come for are the aerial sequences. Whether it’s the group of Top Gun graduates dogfighting for practice or the actual mission itself, it is clear that the filmmakers made a conscious effort to make these scenes as exhilarating and realistic as possible. I imagine that a lot of the shots, at least the exterior ones, were shot in real life with actual pilots. Either way, these scenes could have been hours long without anyone in the audience growing tired of it. Brilliant stuff and all the more impressive when you consider the fact that Tom Cruise likely did his own stunts as Tom Cruise does.

Cruise’s return as “Maverick” is as good as one expects from the actor who hasn’t aged in three decades despite hanging off of moving planes and running across rooftops in his other major franchise. Everything about Cruise’s performance feels consistent with the character we saw in the 1986 film, though the trope of the old dog being brought in to audible groans from the younger generation before showing them all up must be retired sooner than Cruise does from action movies. Look, I get it, “Maverick” being looked upon as the “old man” is a great metaphor for what Cruise really is: The last of the action stars. But even still, it’s a bit too on-the-nose, even in a film that can be boiled down to a redemption story for “Maverick.” The film even opens with “Maverick” saving a Navy program in a dramatic fashion that only Tom Cruise can pull off. In all fairness, subtlety is not to be expected in a film where “Hangman’s” nickname is derived from the fact that he “hangs you out to dry” on missions with him.

Whoever cast Miles Teller as Anthony Edward’s son deserves a major pay raise. Teller has recently become a favorite of mine with his performance in “The Offer,” and while “Top Gun: Maverick” was filmed a few years ago, it’s another stellar performance to add to his resume. Teller not only looks the part of “Goose’s” son, but he embodies him with the same moxie and piano playing movements that Edwards displayed in the original “Top Gun.” The only wonky aspect of Teller’s performance is just how much he towers over Cruise; it’s like the flashbacks in “F9” where the younger Dom Toretto towers over his brother. It’s so noticeable that you can’t help but chuckle at a few of their confrontations. And this is not a jab at Cruise — who is unlikely to have a career in the NBA in any other life — as much as a testament to how tall Teller is. And while Cruise is known for his authenticity in films, as seen in his commitment to stunts us normal folk can only dream of, they could have given him lifts or something at the very least.

Essentially playing the role of this generation’s “Iceman,” Liteuneut Jake Seresin, or “Hangman,” is played by Glen Powell who is just brilliant in his role. He has the same smug attitude that Kilmer had in the original “Top Gun,” yet he’s inexplicably charming enough that you may think before smacking him across the face. Speaking of Kilkmer, “Iceman” does return in a scene or two and some on-screen texts. My fear of “Iceman” being killed off before the opening credits were put to rest when “Maverick” receives a few texts from his wingman. After all, all Jon Hamm talks about in his first scene is how “Maverick” is only there upon the request of “Iceman,” and a portrait hangs in one of the Navy offices that looks like an “in memory” tribute. But when Kilmer does grace the screen, the filmmakers treated him right and don’t overexpose him. Of course, anyone who has seen the heartbreaking documentary “Val” will know about Kilmer’s health struggles, so it would’ve been understandable if they kept him at bay by only allowing him to communicate via the text he writes on his computer. But towards the end of his conversation with “Maverick,” he does speak. Whether it’s autotuned or dubbed, it was a tender moment that ends with “Iceman” asking who the better pilot was to which “Maverick” replies something to the effect of “Let’s not ruin this special moment,” something the filmmaker also did with their treatment and clear respect of Kilmer in the scene.

It’s no secret that Teller and Powell are the obvious standouts from the new group of Top Gun graduates, but Monica Barbaro, who plays “Phoenix,” a quick-witted pilot, makes the most of her moments. Though to be honest, aside from these three, a lot of the others are just there. One of their names is “Payback,” though he doesn’t do much,

Going back to the 80s vibe, yes, some of the dialogue is extra cheesy, and the group of pilots has upgraded from volleyball to dogfighting football to build camaraderie, but nothing screams 80s than the suspenseful moments where the camera cuts to the concerned faces of everyone in the room while someone is out on a mission. In the case of “Top Gun: Maverick,” “Maverick” attempts the near-impossible mission himself as the group of pilots all watch on. It’s one of those “beat the countdown” moments that the most recent “Mission Impossible” movie had. And while it works for the film “Top Gun: Maverick” is, it’s certainly the closest the film gets to replicating the feeling of the original.

About 99% of “Top Gun: Maverick” is just amazing, but two minor gripes are the fact that every conflict is resolved so, so quickly and the sudden tonal shift with Teller’s character in the third act. Both of these complaints are easily explainable, for one, the film is not meant to bask in the roadblocks that some of the pilots run into. But when two pilots are brought to a hospital after a failed practice run, it’s weird to see them back in the classroom after (presumably) one night sans any scratches or marks. And as for “Rooster’s” sudden tonal change, you could likely chalk it up to the shock and reaction to a very dire situation, but after resenting “Maverick” for nearly every other minute of the film, it was strange to suddenly have him calling Pete “Maverick” and spewing out smart ass comments as if he was in a Marvel movie. It’s not that Teller isn’t believable or funny in these moments, it’s just a sudden change that did stand out when watching.

While some modern blockbusters zig (also known as overusing the multiverse), others zag as Tom Cruise has time and time again. It’s impossible to act like “Top Gun: Maverick” is a deep 2022 film a la “Petite Maman,” but it’s one of the most well-crafted tentpole films in recent memory. It’s a two-hour testosterone-fueled romp that improves upon the original in almost every way, especially in the emotional aspects of the film. And those aerial scenes are a sight to behold. I am not a fan of seeing films in Dolby at AMC — I much prefer IMAX — but “Top Gun: Maverick” is an exception as the seats were rumbling along with the planes on the screen. It draws you into the events on screen and is one of the most engaging theatergoing experiences in recent memory. As the case is with most Tom Cruise movies — excluding “The Mummy,” of course — “Top Gun: Maverick” is a must-watch, and seeing it on the biggest screen possible will only better the experience. Take note, “Halloween” and any other franchises looking to kickstart the franchise for a new generation, “Top Gun: Maverick” shows you how to successfully continue the original story with some of the core characters and make new fan favorites along the way.

Paramount Pictures will release “Top Gun: Maverick” on May 27.