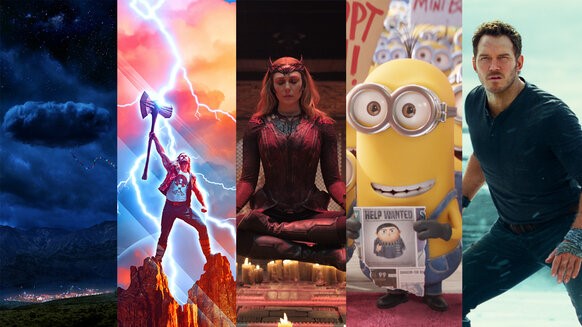 As the school calendar wraps up and most folks are leaping with vigor for the summer season, I wonder what features will awaken the adrenaline with the fierce heatwaves hitting us shortly. Many enthralling choices stand, such as Jurassic World Dominion to Top Gun: Maverick to Black Adam. And it might be safe to say the box office is getting back on track to pre-pandemic levels as we already have The Batman, which took in over $730 million worldwide. Meanwhile, Doctor Strange in the Multiverse of Madness pushes towards an estimated $900-950 million final cume.

After recently predicting which features will take their place on the top-10 list of highest-earning films of 2022, it may be warranted for this writer to divulge the features this year that he wants to witness desperately. But, of course, it’s a cinch to expect myself and millions of others to see the exciting blockbusters, but some motion pictures catch the eye individually.

Without further rambling, here are five films that I yearn to see in the remainder of 2022.

Horror is a constantly evolving genre as the thought and incitement of getting scared in a multiplex becomes quite the case at times. Folks always reminisce over classics such as The Exorcist to The Texas Chainsaw Massacre to The Shining to Halloween, and nowadays, A Quiet Place and Hereditary. Some folks grow tolerant, dare I say annoyed, on the prodding intentions of filmmakers’ ambitions to toss out jump scares to get jolts out of the audience. But, when done sparingly, it means a lot more to the overall sensation.

Then, other horror films disregard tension or drama, leading to a bleak experience and not much of an adventure to linger on about once one exits the building. Some might have a great premise, like M. Night Shyamalan’s recent Old movie, but fail to execute the beats when it matters. However, when a film gets a fascinating idea together and then delivers, it creates more than a sensation and something along the lines of an anamnesis.

That leads me to Scott Derrickson’s latest horror picture, The Black Phone. The trailer showing a sinister masked kidnapper putting his sixth victim in an unknown basement with a disconnected phone, where the phone can be used to speak to the past victims to escape, is alluring. Derrickson may not have the soundest track regarding his filmography, but his recent success with Doctor Strange and his earlier days with horror give him a chance to shine this time.

Plus, early reactions have showered praise for Derrickson’s faithfulness and direction and Ethan Hawke’s performance. It sounds ambitious and terrorizing, and I’m all for it once it hits theaters at the end of June.

Out of the three gargantuan Marvel Studios features we’re receiving this year, this has some of the best potentials behind it for more zaniness and fun times with Thor and his friends. Doctor Strange in the Multiverse of Madness offered incredible insights into the multiverse spectrum, but debilitated storytelling left some crying out once the feature wrapped up.

Director Taika Waititi returns after redesigning the approach to the God of Thunder in Thor: Ragnarok. It produced some of the sincerest changes ever since Chris Hemsworth’s character played second-fiddle to Robert Downey Jr.’s Iron Man and Chris Evan’s Captain America in the first two Avengers pictures. Around the same time, Tom Hiddleston’s Loki quickly took the spotlight in Thor: The Dark World. Hemsworth incorporated more silliness and comedy into his character, and it instantly made us cheer him on his onscreen character progressing forward. Thor also got significant arcs in Avengers: Infinity War when going on a redemptive mission to kill Thanos after the latter slaughtered his community, and in Endgame, where he became a depressed and overweight god after failing to stop Thanos from wiping out half of humanity.

Now, we step into the fourth journey with him, where he is no longer king and seeks to find his purpose. The trailer gave us glimpses of Thor returning to his physique, working with the Guardians of the Galaxy, and the appearance of Jane Foster wielding his former hammer, Mjolnir.

It could be Hemsworth’s last ride, but who definitively knows? We know is we’re getting another wacky ride thanks to Waititi and Hemsworth, and that all makes it more compelling by the time July 8th hits.

The first Black Panther was one of the best superhero films, thanks to its cast, storytelling, themes, and enlightenment of black culture. Director Ryan Coogler composed a beautiful feature that treaded black folks’ political and social themes well and gave rise to many players on and off-screen. It won several Academy Awards and recognitions, and it should become fondly looked back upon for years to come. The sequel has a huge bar to reach, and there is anxiousness to see what path it takes.

However, the massive elephant in the room is the saddening passing of Chadwick Boseman in 2020, who gave his life to the character of T’Challa/Black Panther while battling colon cancer. It’s a damn shame we do not have him anymore, as he was poised to do unfathomable things for the Marvel Cinematic Universe post-Endgame. Now, Marvel must venture out into new territory without his presence or character. We hope they’ll preserve his memory after his potent contributions to four significant features (including Captain America: Civil War and Avengers: Infinity War).

What is known is that Letitia Wright’s Shuri and Winston Duke’s M’Baku will get considerably more screentime and development this time after they shined in the predecessor. Some new supporting players will be onboard. Dominique Thorne will play Ironheart, along with her titular series on Disney+.

How the sequel all works out remains the focal point since some might be turned off at this project without the inclusion of Mr. Boseman. Ryan Coogler will do his best to preserve the story, and we all hope we can move on while recognizing Boseman’s impact.

Avatar: The Way of Water

How can one not go out of their way to see this sequel? The first one is the highest-grossing feature ever and transformed the film industry back in 2009. The return to the world of Pandora looks superb, and the marketing promises a new tale for the Sully family and what battles they will fight to stay alive.

James Cameron, a pioneer in the film industry, changed how high-tech science-fiction and action blockbusters need to produce. His work on the first two Terminators, Aliens, and Titanic, speaks for themselves, and he has three more Avatar features set in stone after this one drops at the end of the year. On top of that, Disney owns 20th Century Studios, so they can ensure folks will drop their belongings and sit down for the “sequel to the highest-earning film ever.”

Assuming Cameron has a good product in store, he will continue to carry momentum for his legacy and Disney’s for the remainder of the decade with this one brand.

There is no more to say other than getting your tickets once they’re available for the December 16th wide release.

If there is one film this year, I’m hellbent on, it’s Jordan Peele’s third entry Nope.

After witnessing the magnificence of his first two features, Get Out and Us, it should be articulated that Peele understands his craft as a rising filmmaker. He takes pride and risks by delving into this country’s political and social themes, highlighting the hypocrisy behind our preaching of exceptionalism, freedom, and equality. Get Out explored the ideologies of slavery and Afrofuturism while Us thrillingly jumped into situational classism and duality themes (a la reference to Hands Across America and doppelgangers).

Nope has colossal hype behind it because Peele has already captivated us with his twisted, mesmerizing tactics. He’s like a modern-day M. Night Shyamalan, but with a more inquisitive approach to what he needs audiences to ponder and recollect once they head back into the open world after witnessing his works. Furthermore, Peele takes it a step further and expresses deep-rooted fears regarding issues that plague America’s soil with such candidness that we as humans do not wish to communicate.

Building this suspense for Nope is a gamble, but the trailer has created the impression that Peele struck lightning a third time. The bar is set high, and we hope Peele has a worthy treat.

The movie could most likely be about aliens, but it could be on concepts of Western themes or the idea of parallel universes. Or maybe we’re all simply overlooking it, and it’s about the topic of modern surveillance and tracking. Peele has already spoken about some theories but promises we’ll be in for a ride and most likely shouting “nope” (like many do regarding horror features).

Bring it on, Mr. Peele, because many of us and I need to shout the word once we witness it on July 22nd.