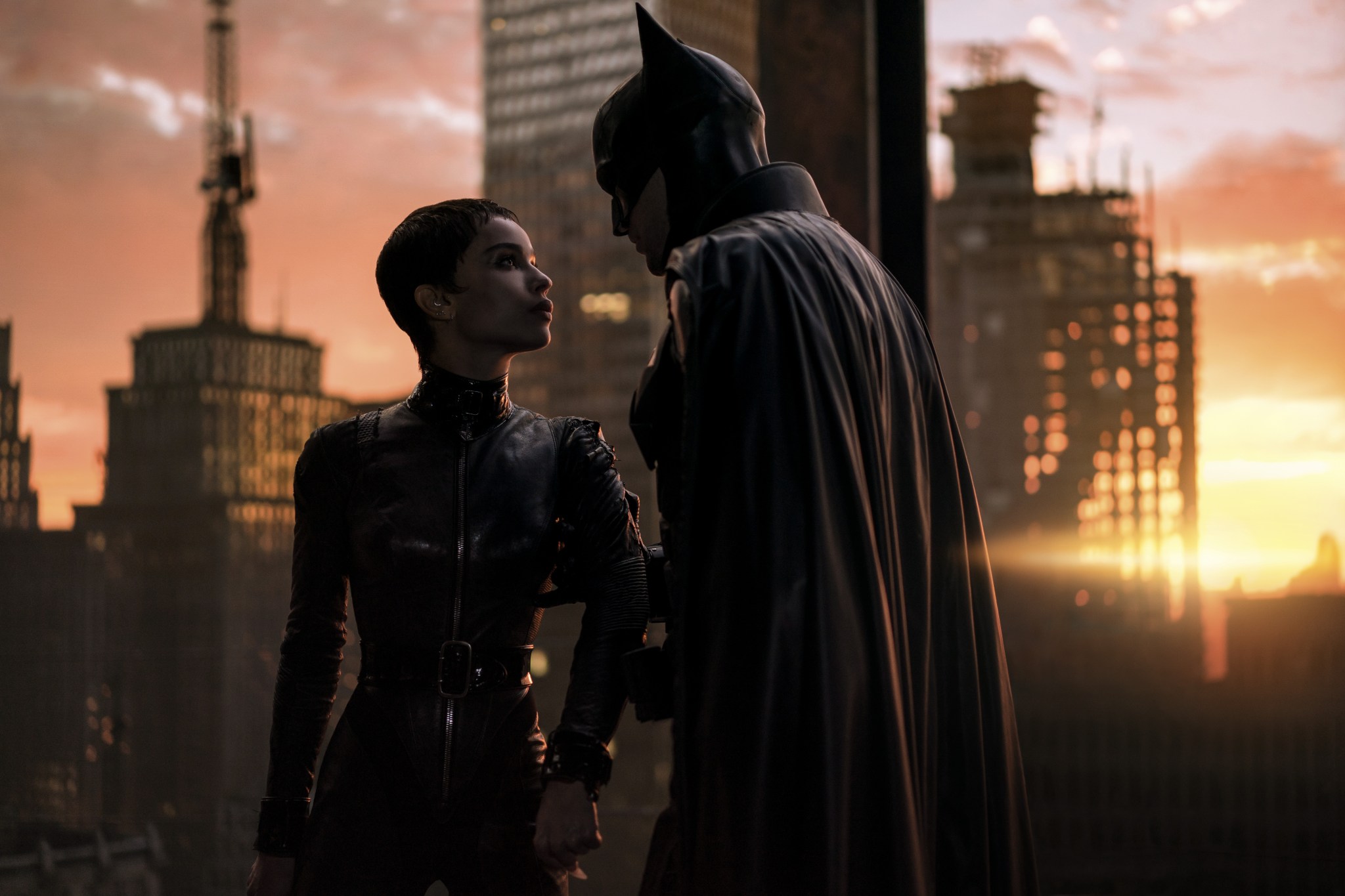 “The Batman” is the latest film about the caped crusader that stars Robert Pattinson as the titular character, Zoë Kravitz as Catwoman, Colin Farrell as the Penguin, Paul Dano as the Riddler, Andy Serkis as Alfred, and Jeffery Wright as Commissioner James Gordon.

Despite there being more different live-action Batman actors than likely any other superhero, “The Batman” was a critical and box office success. The film holds an 85% approval rating from critics on Rotten Tomatoes and was the highest-grossing film of 2022 up until “Doctor Strange in the Multiverse of Madness” took the crown this past weekend; though “The Batman” still has about $27 million on the “Multiverse of Madness” domestically.

Editors’ note: This review was originally published on February 28.

“Has any superhero rotated through actors like turnstiles as much as Batman? In the last decade alone we’ve had Christian Bale finish his trilogy, Ben Affleck made four appearances as Batman (counting “Suicide Squad” and “Zack Snyder’s Justice League), and now, Robert Pattinson makes his debut with the cape and cowl. While Matt Reeves’ newest adaptation brings a lot of great to the table — specifically a different kind of origin story for Batman, Gotham itself, and the “Zodiac”-like true crime storyline with noir flare — with very little to complain about. It is a comic book movie, however, so of course “The Batman” does fall into some tropes of the genre, most specifically a let down of a third act and a tease of an all-too-familiar character. Nevertheless, “The Batman” does enough to maybe, just maybe, be as good as “The Dark Knight.”

Robert Pattinson was a controversial choice for Bruce Wayne/Batman. To be fair, I never watched the “Twilight” movies even despite being in middle school during its apex, so my first real exposure to the young actor was “Good Time,” my favorite film by the Safdie brothers, and “The Lighthouse,” which he was phenomenal in. Even his turn as the corrupt and slightly bizarre Southern Baptist priest in “The Devil All The Time” stole the show. So personally, the casting choice never bothered me. Being able to look past his “Twilight” era is needed to enjoy “The Batman.” Plus, who can really blame a young actor that takes the massive paychecks for a franchise like “Twilight”? We don’t blame actors for doing the same thing with the MCU; granted those movies are of (what I imagine is) higher quality.

With that being cleared up, Pattinson’s Batman is killer; his Bruce Wayne is a bit of a mixed bag but more on that later. That scene from the trailers where Batman button mashes his way through goons in the subway is the most alpha entrance imaginable. One of the first lines spoken by Bruce in the opening voiceover is chill-inducing and appropriately sets the mood of the film: “It’s a big city, I can’t be everywhere, but they don’t know where I am.” There’s an emphasis on Batman’s detective skills, a welcomed change considering Batman is the “World’s Greatest Detective” after all. The entirety of “The Batman” is a true-crime mystery a la “Zodiac” that sees Batman track down the Riddler (Paul Dano), who is killing all of Gotham’s prominent political figures. Batman works with Commissioner Gordon (Jeffrey Wright) and Selina Kyle (Zoë Kravitz) to solve the Riddler’s master plan.

Pattinson’s Batman is a self-proclaimed “nocturnal animal,” brutal, intelligent (though not intelligent enough according to the Riddler), and a teenager going through his grunge phase (in spirit). Nirvana’s “Something in the Way” plays in the beginning and end of the film, perfectly encapsulating this Batman. Above all else, this Batman is young. He’s got some time under his belt, but street thugs still don’t know his name nor does anyone on the police force trust him, save for Commissioner Gordon, and he still falls on his face here and there. Pattinson’s Batman is even afraid of heights, which is a small, but crucial touch. It is a funny juxtaposition to watch unfold, some hate Batman but love Bruce Wayne and vice versa. But for as much as Pattinson talked about his Bruce Wayne/Batman being “crazy and perverse,” this Bruce Wayne is anything but. Pattinson’s Bruce Wayne just waltzes around Gotham and with a face that screams he’s been listening to a bit too much Phoebe Bridgers. The monotone and slowed cadence are very similar to the one that his Batman speaks with. It’s not like either of Christian Bale’s or Ben Affleck’s performances as Bruce Wayne featured a larger-than-life personality, but Pattinson is a little bit bland. You could chalk this up to Pattinson and Reeves trying something “different” with Bruce Wayne, but he wasn’t nearly as unhinged as Pattinson led you on to believe.

If nothing else, Matt Reeves’ “The Batman” is a beautiful looking film. Filled with a balance of grimy alleyways and beautiful sunsets, it may be the most unique Gotham has ever been in any comic book movie. It’s a slick combination of Nolan’s Gotham, the Gotham in the series of the same name, and the one featured in “Joker.” It does feel a lot like New York City, and not just because of the Gotham Square Garden, which I must add is far too small to be comparable to Madison Square Garden; it fits about as many as a D1 college basketball arena. Be that as it may, it sounds cliché to say that Gotham is its own character, but there’s something so unique that lends itself to the noir atmosphere, and it makes total sense why WB greenlit series about the Gotham Police Department so long ago; there’s a whole side of crime wars that can be further explored.

Rounded out a stellar cast is the aforementioned Zoë Kravitz, Paul Dano, Jeffery Wright, Colin Farrell as the Penguin, and Andy Serkis as Alfred. Kravitz and Pattinson work well together, with a relationship that perfectly toes the line of fun and sexy. Colin Farrell, who is almost unrecognizable under heavy prosthetics that rivals the team that did Jared Leto’s for “House of Gucci,” plays a mobster version of Oswald Cobblepot that can only be best compared to Robert De Niro’s Al Capone in “The Untouchables” (though don’t worry, no one gets their head bashed in with a baseball bat, only a carpenter’s tool). This version of the Penguin doesn’t do much waddling, though he does at one point when he is tied up, and there is so much more story to be told about him. In “The Batman,” he is delegated to a small role where he is yet to really become the Penguin character we all know. It would appear that they are taking the long game approach as the “Gotham” series did with the character, and hopefully, the sequel will give Farrell even more time to shine. Farrell delivers one of the best lines in the entire film; when being interrogated by Batman and Commissioner Gordon, he asks the two if this is a case of “good cop, bat-shit cop.”

Out of the supporting cast, Dano is by far the most impressive. The unstable nature of his version of the Riddler feels much in line with his character in “Prisoners.” It’s uncomfortable to watch any of the vignettes that the Riddler puts out throughout the film, and Dano is just so damn good at playing these types of characters. When he and Batman finally come face-to-face, it’s unsettling because you don’t know whether or not the Riddler is going to abruptly do something. The scene where the Riddler is finally caught — this is not a spoiler as it’s in one of the trailers — felt straight out of “Blade Runner” and that one painting in every diner.

While it feels like the trend nowadays is to make superhero movies as long as can be, “The Batman” (mostly) earns its three-hour runtime. The “Long Halloween” storyline that unfolds does require a lot of time. “The Batman” isn’t as fast-paced as many other comic book movies; it’s like an old noir-thriller that methodically walks through the film and the investigation that takes place. The only concerning thing is that this is the first is a presumed trilogy, and starting at three hours means that we can really only go up. “The Godfather Part II” went from three hours to three and a half, and that is a tough ask unless movie theaters begin showing fewer trailers.

The biggest complaint after viewing “The Batman” that holds it back from reaching the heights of say, “The Dark Knight,” is that the third act is a bit underwhelming. The Riddler isn’t a villain that is meant to have a long, physical battle with Batman, but what occurs leaves some to be desired, even if it does serve the purpose of the overarching character arc that Bruce goes through. It just feels so different than the rest of the film, almost as if they quickly threw spaghetti at the wall and saw what stuck after realizing they needed something with action in the third act. Where the film leaves you does make sense from a story perspective, Pattinson’s Batman learns a valuable lesson, but the same message could have been relayed in a more engaging third act. Of course, it’s just “sequel-fuel” that purposely leaves the audience wanting more before the second entry, but considering “The Batman 2” is in the very early planning stages, it will likely be a couple of years at the bare minimum until we get a continuation of the story.

No spoilers here, but there is a scene towards the very end of the film that basically serves as the film’s post-credits scene. And while the scene itself is fine, it brings us back to the same well that most Batman movies have arguably run dry. It’s not egregious enough that I won’t give it a fair shot whenever this character pops back up, but this character has been used ad nauseam. With the Gotham that Matt Reeves has built, it’d be far more interesting to see some other villains, some of which have been used in other live-action films, in a more grounded reality (Killer Croc, Mr. Freeze, Black Mask, to name a few). Maybe some of those will be used down the line, but this reveal towards the end of “The Batman” felt anticlimactic. If the character hadn’t been used so much (and so recently), it’d actually be exciting. As it stands, it’s a moment that would have sounded cool in 2013. (Don’t read the cast list going in that has been circulating around Twitter if you don’t want this reveal to be spoiled.)

As a player of most of the “Arkham” games, the plot of “Origins” was far cooler on paper than in reality, a lot of “The Batman” brings me back to the late nights of playing those games. Matt Reeves has given Gotham a new life, making it feel like a character of its own, and Robert Pattinson is a very good Batman. The villains of “The Batman” stand out as the most grounded adaptations of these villains we have ever seen, and the mere prospect of future installments is more exciting than many of the comic book slog we get. The film does occasionally drag, it is three hours long after all, but the character work, cinematography, and the score, my lord the score, all make up for it. All I can recommend is not drinking a large Icee going into the film. Otherwise, have a blast exploring this noir true-crime Batman film. It’s not the Batman film that we, as comic book fans, deserve, but boy is it the Batman film that we need.