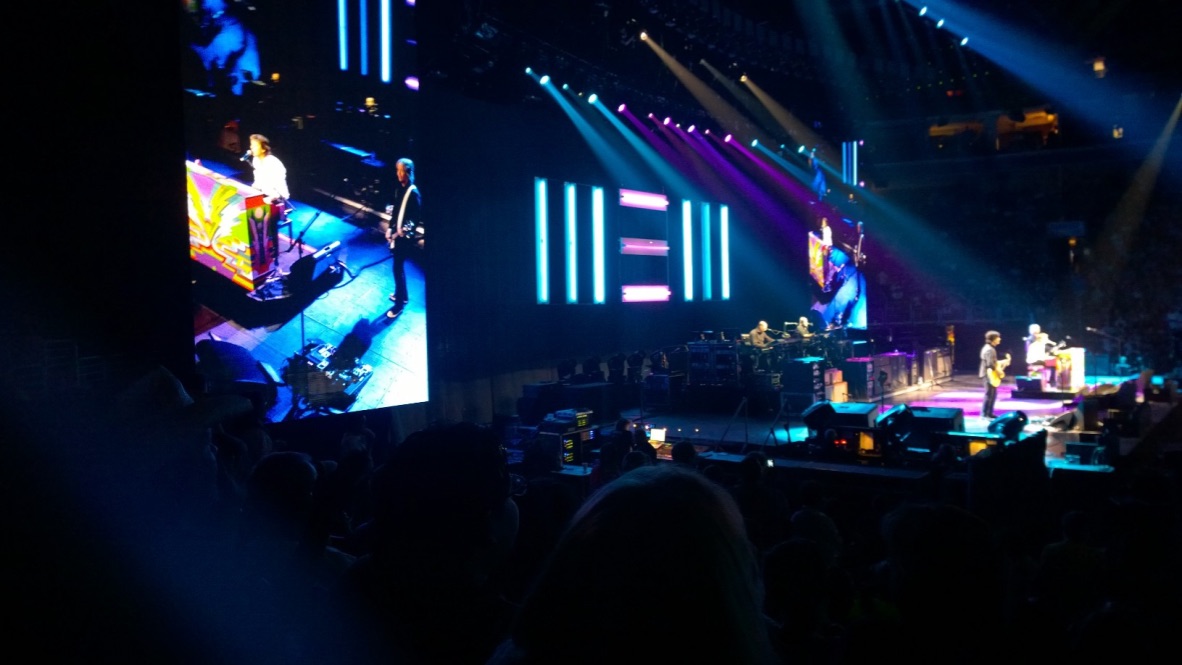 Uncategorized on June 18, 2022 0Likes At The Movies
ShareTwitterFacebookInstagram

It’s roughly 8:20-8:30 on June 4, 2022, at Syracuse University’s Carrier Dome. After an hour-long wait in the merchandise line to buy a $100 hoodie, me, along with the 30,000+ others in attendance were packed inside of this sports area, waiting for the show to begin. Paul McCartney finally took the stage and kicked off one of the final shows of his 2022 “Got Back” tour. I’ve been very fortunate to have seen Macca play when he came to Philadelphia in 2015 on his “Out There” tour, a far superior show I might add, but being seven years older, having gone through high school and college since the last show I saw him play only added an extra layer of anticipation and emotion to this show. For all I know, this was my last Paul McCartney concert, ever. Additionally, I got to share this moment with my mother who grew up on The Beatles’ music and missed out the previous time I went (I took my father on father’s day last time around). And while I could nitpick my way through the 36-song set that was largely similar to the show in 2015, I won’t because it’s Paul McCartney’s 80th birthday and the man doesn’t owe us anything. And seeing the icon that largely inspired my youth from the long hair to the first expensive instrument I ever got: a Hofner violin bass guitar (I also wear a necklace of it) sent chills down my spine. The man was 79 (at the time) and played a three-hour concert whilst bringing joy to thousands of fans in the less-than-stellar Carrier Dome, and credit must be given to both McCartney and his incredible backing band (I believe they’re the best backing band in rock history).

From an early age, my father raised me on The Beatles. I almost exclusively listened to the Fab Four growing up; even my first iPod was filled with every Beatles album available (thank you to my father for taking the time to burn each CD onto his laptop and sync it to my iPod). My father is likely just coming around to the fact that he created a monster. Hearing my favorites such as “Yesterday,” which I dreamt of playing in front of a live audience since I was in third grade, “Taxman,” and “If I Fell” through my white earbuds was a coming of age for me. In the song “Early Days” from “NEW,” McCartney sings a line: “Hair slicked back with vaseline, like the pictures on the wall, of our local record shop/We’d hear noises we were destined to remember, we willed the thrill to never stop.” This line has resonated with me since the 2013 album came out (I even dragged my mother to buy me the CD at Target in 2013 the day it came out and was disappointed she didn’t buy me the deluxe edition), as I wanted my hair just like McCartney’s from the DVDs I had of his shows, and those noises — or songs — that I played ad nauseam have stuck with me to this day. There came a point where I didn’t listen to the Beatles as much; I went through a rap phase, a country phase, and the U2 phase that still continues to this day. It wasn’t until I hit my rock bottom that I came back around to McCartney.

Released on September 7, 2018, “Egypt Station” quickly became my go-to McCartney album during a very rough time. I was depressed and at a school where I was miserable. I was a 17-year-old freshman in college, six hours away from home and my friends. There’s far more to that story, but I’ll spare you the time. It was “Egypt Station” that transported me out of that misery. I spent every walk, whether it be before my 8:15 class, to get meals, or my lonely night walks around campus, chances were, “I Don’t Know” was likely in my earbuds. The lyrics of that song truly encapsulated how I felt at that moment: “What’s the matter with me? I don’t know,” and I can still transport myself back to that time when I listen to this album. Of course, you have some other songs that many McCartney fans seem to dislike such as “Come On to Me” and “Fuh You.” Now, I will acknowledge that both are very overtly sexual and a bit awkward, but these songs were in constant rotation during this time. Plus, “Fuh You’s” chorus slaps.

Going back to my childhood, I remember my father dragging me to see the newly-restored “Rockshow,” a concert film from McCartney & Wings’ 1976 tour. Whilst I didn’t know half of the songs — I was more of a Beatles fan at this point than a Wings fan — this is what kicked off my love and appreciation of song of Wings’ music. From the opening trio of “Venus and Mars”/”Rockshow”/”Jet” to some of the biggest hits from the group like “Listen to What the Man Said,” “Let ‘Em In,” and “Silly Love Songs,” this concert had it all. McCartney even played some Beatles tunes, my favorite being the sped-up and tuned-down version of “I’ve Just Seen a Face.”

Bringing us back to the present day, I stood in awe in the Carrier Dome as Paul and his band segue from the opener, “Can’t Buy Me Love” into “Junior’s Farm,” a Wings song that I fell in love with last summer. The defining moment of the night, however, was “Maybe I’m Amazed.” Admittedly, this is the hardest song to listen to live in 2022 (not as bad as that “SNL” performance, however) because Paul struggles so much and there’s not much the backing band can do in the verses, but I got chills down my spine during the opening notes and tears in my eyes by the end. Despite merely being a fan of Paul, it’s hard not to feel like you know Linda. For those that don’t know, Linda unfortunately passed in 1998, and I’d argue that Paul’s love shows for her in his best love songs (“Maybe I’m Amazed,” “You Gave Me the Answer,” “My Love”) all being for her. Her legacy lives on with Meat Free Monday, and Paul still plays “Maybe I’m Amazed” in its original key. My theory is that despite the vocal struggles, he keeps the song in its original key in honor of her, though he does that for a lot of songs. And to be fair, the vocals heard on the original record are lighting in a bottle and Paul has never sung the chorus as well as he did there. Either way, it’s a touching moment only enhanced by video footage of Paul with one of their daughters in his coat that was taken by Linda in the 1970s. “Maybe I’m Amazed” is, in my opinion, the greatest love song ever, and I can’t recommend this version below enough.

So, as I attempt to wrap up this lengthy think piece, this is a happy birthday “fuh” Paul. There are a billion things I could say about him and his songs and their impact on me, and I am so thankful that I could see him live twice in my life. I spent far more hours than the average for a kid my age watching his live concerts from Red Square to the “Good Evening New York City” CD/DVD combo pack that I got for Christmas years ago and still keep in my car. As we reach the twilight of Paul’s career, it’s time to begin “letting go” of the vocal struggles and setlist because he owes us nothing. The man has toured the world fairly consistently from the 1970s onwards giving the world an opportunity to see a “fuh-ing” Beatle (last “Fuh You” pun, I promise) in the flesh. I think that’s what gets lost in the midst of the fandom complaining about his voice and setlist; you’re still seeing, for my money, the greatest artist of all time sing the songs he wrote 60+ years ago. He doesn’t owe fans anything, yet he goes out there any chance he gets.

I don’t imagine Paul McCartney embarking on a farewell tour, and part of me hopes that the end is near after his Glastonbury set this summer just because it can be hard to see him struggle so mightily on songs so near to my, and many others, hearts such as “Jet.” I’ll never meet Paul nor will he ever read this, but I know that so many people feel this way about the greatest Beatle and greatest artist ever, Paul McCartney. So not just happy birthday, but thank you to Paul and his backing band that has kept the spirit of The Beatles, Wings, and Paul’s solo career alive. They’re all so incredibly talented in their own ways and look like they’re having the time of their lives out there even if they’re playing “Hi Hi Hi” for the umpteenth time. Thank you, Brian Ray, Rusty Anderson, Abe Laboriel Jr., and Wix Wickens for the memories and way that you carried my childhood through your performances captured on my “Back in the U.S.” and “Good Evening New York City” CDs.