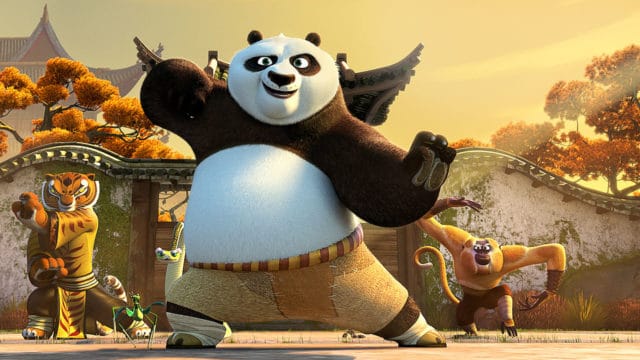 In a bit of a shocking turn of events, Universal announced that their unannounced March 8, 2024 film slot would go to the fourth adventure of Po and his kung fu friends.

It will be the first film in the DreamWorks Animations franchise since 2016 when they concluded with a planned trilogy (although co-director Jennifer Yuh Nelson claimed a fourth entry could still become a reality as long as the focus remained on Po). Set in a wuxia fantasy of ancient China, the journey began in 2008, focusing on Po the Panda (voiced by Jack Black), a giant clumsy panda who becomes improbably chosen as the prophesized “Dragon Warrior” and eventually earns a title as a master in kung fu through his learning and teaching. Over the film and the two sequels, Po trains under Master Shifu (Dustin Hoffman) and Master Oogway (Randall Duk Kim) to overcome his doubts and become China’s hero, defeating several dangerous opponents and reuniting with his past parents.

All the three features combined have earned over $1.8 billion and spawned TV specials, including The Dragon Knight, which premiered on Netflix last month. They each have also made highly positive reviews, mostly going towards their animation, character development, and casting.

It’s a guarantee they’ll have Jack Black back in the fold as the warrior panda, but it’ll be intriguing if they can bring back all the other main cast (including Angeline Jolie, Jackie Chan, James Hong, Dustin Hoffman, etc.). DreamWork’s first step should be to bring back Jennifer Yuh Nelson to direct, along with screenwriters Jonathan Aibel and Glenn Berger. If that comes to fruition, allow Nelson to go all out without the worries of audiences decrying more dramatic/darker story elements. The brand should stick to action comedy first, then wacky moments second.

Time for more Skadoosh once Po returns to theaters on March 8, 2024.