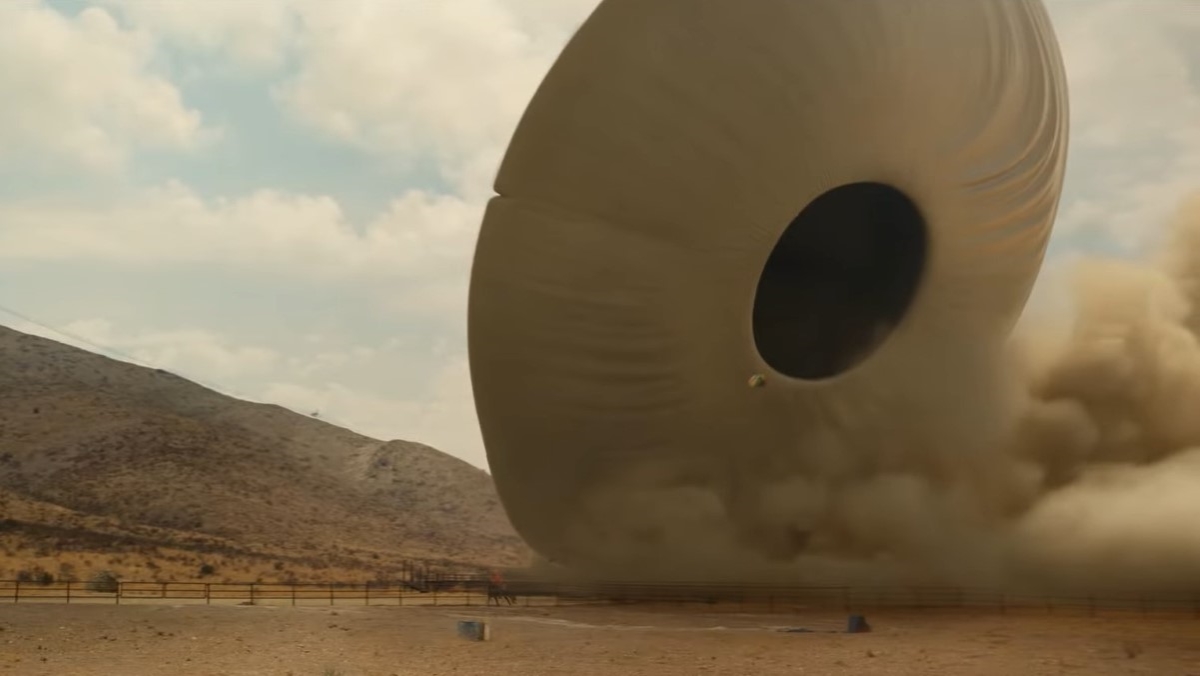 In honor of Halloween, yours indeed decided to take the time to venture back into the horror realm. (There was a fathomless analysis on The Shining, but that can wait another spooky day.)

Horror pictures have been on a roll as of late. Barbarian, Smile, Pearl, and Werewolf by Night can all attest to playing up with some disturbing moments and have been playing strong in the multiplex and at homesteads. The same can’t become said for Halloween Ends, despite being promoted as the final battle between Michael Myers and Jamie Lee Curtis’s Laurie Strode. One feature that did drop onto Bluray/DVD this past week was Jordan Peele’s Nope, a fascinating insight into the utilization of spectacle and exploitation. So, we’ll examine Peele’s latest horror picture (which should be something to watch like his previous two works) and understand what points he wants us to recognize. (Note: Spoilers are ahead).

It seems fitting to open with the axiomatic: What exactly does a chimpanzee raging and destroying everything after the opening shot have anything to do with two siblings trying to capture a UFO on camera for their gain? The opening, providing no context, shows a horrific massacre with a shoe standing upright and a bloody chimpanzee waltzing around before witnessing another being (via POV). It cuts to the Haywood ranch, where OJ (Daniel Kaluuya) is tending to the horses with his father, Otis Sr (Keith David). Both look to the sky after hearing screams, and debris falls with a nickel piercing Otis Sr in the face, killing him. Months later, OJ and his sister Emerald (Keke Palmer) are fired from a set after one of their horses becomes aggressively startled, and it leaves OJ no choice but to continue selling horses to keep the ranch afloat.

When they drive to a nearby Western theme park called Jupiter’s Claim, we meet Ricky “Jupe” Park (Steven Yuen). We learn he was the child that survived the Gordy’s Home massacre and continually dealt with its traumatic experiences after its fallout. However, he now has turned the little intricacies from the leftovers of the set into something profitable. One fascinating part demonstrating how the subplot and the main story connect is his explanation of the incident…through an SNL skit depiction rather than his trauma. “He’s just crushing it; he’s a force of nature. He’s killing on that stage…”

Humans have this compulsive, dare I say toxic, relationship regarding spectacle. But we are not privy to dealing with genuine horror, the ones that perpetuate our mindsets and leave us in states of fear and despair. The entertainment industry has disguised this authenticity by playing on our fears with cheap thrills and noisy shock moments that don’t amount to much after the rolling credits. In practicality, so many moments swiftly occur that subconsciously affect our mindsets. Shootings, traffic collisions, assaults, and people collapsing all continue to this day and break folks’ hearts. There are even documentaries/evidence out there, and we choose not to witness them because of how despicably gruesome they are. But, sometimes, we want to look, and other times we want to avert our eyes.

In the film, Ricky has disguised his trauma under the veneer of capitalist hustle and humor because people are interested to know how the event unfolded and the horror side of it. In the Haywoods siblings’ case, they want to get the UFO on camera because it’ll A) prove how their father died, B) it can promise them a life of fame and recognition for capturing this situation of a spectacle, and C) give them back that missing black history in their family’s involvement in Hollywood. Regarding the last detail, there’s more to the story of the infamous Eadweard Muybridge motion picture clip. And the same can be said for past world wars, political schemes, 9/11 terrorist attacks, or the ongoing Russia/Ukraine escalations.

When evaluating the UFO, OJ figures out that not looking at it allows you not to be sucked up and devoured. But, concerning trauma, how can we prove it is accurate if we don’t see it? The aspect of surveillance remains a focal point of Peele’s work, from the cameras set up at the ranch to Emerald’s utilization of the Winkin’ Well to the UFO hiding in a cloud. Guy Debord claimed that in societies where modern conditions reign, life presents itself as a whole of spectacle. The alien’s presence watching the town of Agua Dulce almost stands as a panopticon, but when the devices become utilized by the Haywoods and Angel (Brandon Perea), they can flip the narrative of how the story stands told from their perspective. And it all toys with the belief that to be alive is to become watched.

This brings us to the main point of Nope: it’s a parable of the powerful and untameable predator of the film industry. The feature is a phantasmagorical story of black folks in the present-day American West (Hollywood), detailing the implications of cinematic representation. The opening credits speak volumes of this as we see the mouth of the UFO (synonymous with the head of a camera) zooming in on the Muybridge clip while hearing noises of screaming and horse galloping beats. If we dig deeper, we can see a poster at one point of Sidney Poitier’s Buck and the Preacher, a rare exception to Hollywood’s continued whitewashing of the American Western. Many stories of black cowboys are replaced with white leads nowadays; in this feature, the black cowboy is dead within the first seven minutes. In a sense, Peele is attempting to restore this measure by examining spectacle, honoring the efforts of the Haywoods to capture the UFO, and correcting some of their family’s erasure from film history.

Filming the UFO (Jean Jacket, as it’s called later on) is the key to Haywood’s survival. Essentially, they’re no different from the TMZ reporter who trespasses for footage or filmmaker Antlers Holst’s (Michael Wincott) latest obsession with acquiring the “impossible shot.” The film may stand as a metaphor for cinematic history exploitation, but it is an exploitation film at its core. And when assessing Peele’s template, he criticizes Hollywood cruelty and how it unintentionally causes damage for that “one moment.” Filmmaking comes with atrocious tolls, ranging from long binding hours to enormous, diabolical fame, implying conflicts between principled costs and evident pleasures. The “scars” Peele refers to remain, particularly with Ricky, who tries to contain his past trauma and exploits it under entertainment measures and showcases of spectacle. The show he introduces makes an uncannily evident predatory connection between viewers and buyers, thus pointing out how the lines between obsessive craftsmanship and commerce creation become nearly identical.

And what does that generate? The UFO sucks up the physical matter (aka living creatures) and spits out inorganic remains and blood as punishment; a neat callback to the Nahum 3:6 verse at the movie’s inception. Perhaps it solidifies that we must live out our livelihoods as intended instead of relying on money and spectacle to guide our regimes. Otherwise, what is the value of living?

Jordan Peele’s Nope is a fantastic horror film about humanity’s addiction to spectacle and a farcical letter to Hollywood about the ramifications of exploitation. There are many juicy bits here to sink one’s teeth into regarding Peele’s innovation and respect for exemplary filmmakers’ techniques like Stanley Kubrick’s, Alfred Hitchcock’s, and Steven Spielberg’s. His products have converted into mesmerizing pieces that we need to study them and his topics for evaluation. Get Out spooked us about persisting slavery; Us tormented about marginalization and duality. And Nope showcases the dangerous presence of spectacle (figuratively and literally).

Marrying the aspects of horror with entrenched social commentary appears to stand as Peele’s technique. Now it’s simply up to one to view the thriller and unpack the beast. Or shout “nope” and grasp onto your seat.

SHANG-CHI, NO TIME TO DIE, VENOM 2, AND HALLOWEEN KILLS WILL PAVE THE WAY FOR THE REMAINDER OF 2021’S BOX OFFCE SUCCESS