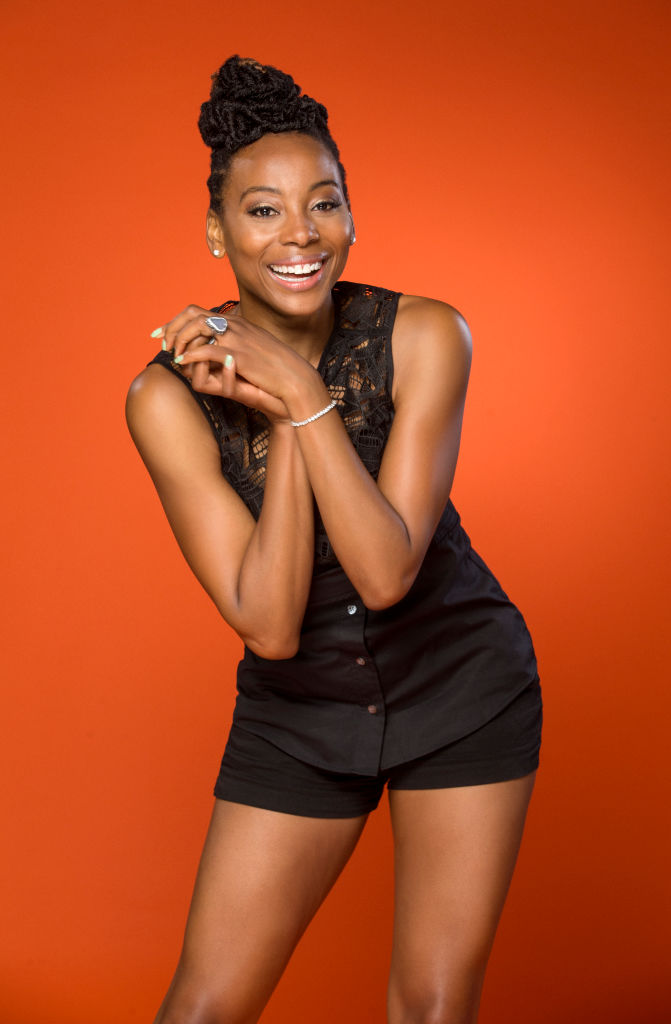 Spotlight on May 8, 2018 0Likes At The Movies
ShareTwitterFacebookInstagram

Erica Ash plays Gwen Sullivan on BET’s new series ‘In Contempt’. She is the star of the show who sets a big precedent for black women. Ash’s character is not the only black woman on the show, but she does have power lines. Many of the scenes allowed Ash to think about the issues that are going on in America. Ash reflects on the justice system compared to her character’s perspective on the show.

ATM: Are you aware of the presence you set when walking through the double doors in the courtroom on the show?

EA: {Erica Perspective} Oh, wow. Yes, I am definitely aware that there is a charge for this character to represent well. This show is from the perspective of the public defender, which we do not see very often. It is very important for me to show that there is power in what they are doing. They are considered the underdogs of the law profession, but they work harder than the other lawyers. Additionally, public defenders have to work with a third of their resources compared to other lawyers. They have to be very creative. Public defenders are overlooked and under-financed. Also, people think they are not the greatest, but I know this is the opposite. I have spent time with public defenders to learn what they go through on a daily basis.

{Gwen Perspective} I feel this is just another day at work. This is her life. Gwen’s life is consumed to make sure people get into fair shape. Yes, she does have the presence. I do not think she recognizes this. She is way to focus on clients and cases to worry about what others are thinking about.

ATM: So, she is oblivious to her presence?

EA: Yes, she is oblivious to it. I think this a great thing. The presence is positive. There are people who have different opinions about her. They call her a “pitbull” and “tough”. She is so driven and focused.

ATM: How do you feel you represent the perspective of a black female?

EA: I like to know that I am relatable. I am not trying to be some perfect character. I want people to see the reality and that black women go through the same things as white women during the heavy stress situation. I hope that it is positive in the sense that people can see themselves in my character. I want them to see good, bad, highs and lows. I want to represent something real.

Similar to my character M-Chuck on Survivor’s Remorse. I was not overly hyper-focus on this even though she was a lesbian character. I was focused on creating a real character that people can relate to with real sensibilities. We do not get to see Gwen’s character every day, but she lives it each day.

ATM: Tell us about your character Gwen Sullivan.

EA: She is a “pitbull in pumps”. Gwen is wit smart, focus, driven, ruthless, flawed, and imperfect. She is on a mission and knows the justice system is broken. Also, she works extremely to give the people who are affected the most a chance to live their lives. She goes through a lot of interpersonal relationships. My character is definitely a workaholic and shopaholic. Gwen’s father does not want her working on this level of law. There are so many juxtapositions when it comes to Gwen. I love that she is a complex character. I discover a new layer about her in every episode.

ATM: Why did you choose you to take on this role?

EA: The script was a page turner. I could not put this script down until finishing the episodes they sent me. I wanted to be a part of it. They agreed to give me Gwen. My response was “I’ll take her.” I was a little bit nervous because she was so complex in layers. Not nervous about me not doing a great job, but nervous about how I was going to approach it. Each character had a nice thought out story line. Overall, I think it is the public defender’s time to be in the spotlight. In a lot of the cases, the news is missing that they cannot afford bail. They are telling you all the things that are happening, but they are not telling us “why.” The world needs to understand exactly why certain things are occurring in the justice system. Otherwise, talk without knowledge leads nowhere. This script really dealt with “why” in a very entertaining and captivating way.

ATM: Why do you believe BET has now decided to air a series like this?

EA: Police brutality has been happening since slavery. There are so many other cases that we are not hearing about. I recently heard cases that are just not getting spoken about. As technology continues to constantly grow, we will see more of the underbelly of the police department. I am grateful to the police officers that take their oath seriously. For the ones that don’t . . . shame on them. Everything has a reaction.

BET has had this project for about the last ten years. They recognize that timing is everything. It is a great time for BET to have this for the network. BET is trying to go to the next level. This network wants to make good quality content. The world is now ready for this. A lot the cases you see on the show have the same elements of the ones you see on the news. People can point to the things they see in their real lives. We are not actually the minority, but we are the majority. I think this is a mental thing people try to put on us.

ATM: Explain your relationship with Charlie, Bennett and your character’s friend Tracy?

EA: Charlie and I have a very long standing friendship. It is one of those things where you work with someone a lot and these cases are long and tedious. He is there. We have chemistry. I think Gwen has a soft spot for him.

Bennett is Gwen’s all time crush. He is Gwen’s dream guy, meaning the type of guy you marry. Bennett is her former law professor. This speaks volume as to how much she is about law and legality. This is why she goes so hard on cases. She has this student-teacher infatuation.

Tracey is the girl that has seen me go through a lot. We have helped each other out in a lot of situations. Tracy will probably be my kid’s grandmother if I have kids on the show.

EA: Gwen’s gets more action in the bedroom. We are both feisty, driven, mouthy, love our professions, and workaholics. We have to be reminded to take some breaks. Gwen likes to physically fight whereas Erica does not. Erica has never been arrested, however, Gwen has been arrested several times.

ATM: When did you realize you could possess the same personality as Gwen?

EA: When I started dreaming about being in the courtroom. This happened about two weeks after being offered the role. I read for interest two months before the role. I was thinking to tackle this and do it. I read articles, spent time at the Atlanta public defender’s office, and watched documentaries.

ATM: Gwen’s line “You are supposed to care. We are not processing widgets. These are human beings. Why bother with the justice system at all. Why not just take them all back to hang them from a tree.” This is what most of America has been thinking. What went through your mind after you uttered this line?

EA: First, a shockwave went through my body. It was one of these things to recognize how messed up the system is when saying it out loud. Saying this out loud brought home all of the young men who were affected by the justice system. A few of these young men are Kalief Browder and Trayvon Martin. People are getting off. On the other hand, people are being accused and convicted before they are even convicted. It brought me back to when I recognized why a lot of the overcrowding happens. People come in who are arrested because of an alleged offense. They can either post bail to wait for the trial at home or not post bail. This causes them to wait in prison like Kalief Browder.

A lot of these men are kids. The system is trying to wipe us out from the use on up. They serve the sentence even before you can even find

out if they are guilty or not. Browder waited in prison for three years awaiting his trial because the court system was so back system. He could not afford bail. Then when you are found not guilty it is too late. You have already lost your family, bail, and job. They expect you to go back as if nothing happening. You do not get an “I’m sorry.” All you get is “Your free you did not do it.” This scene sent a shockwave of just rage through my body. I had to take a moment to shake it off to move on.

ATM: Take us through the production of the sex scene with your character and Charlie.

EA: We met the day before shooting this scene. The conversation was like “Hey, how are you? You know are going to be having sex tomorrow” I told him I was nervous because this was my first full on sex scene with a man on the scene. He was so very gracious. Everyone on set made me feel super comfortable. The atmosphere was “I am willing to go as far as you want to go.” By the end of the first take, I was saying “I want to do this. I want to put my leg here.” I ended up becoming comfortable super fast. We had a really fun time.

ATM: As a little girl did you ever think you would become an actress?

EA: I dreamed of specific snippets in my life. Also, I dreamed of moments being onstage, travelling, and winning awards. I have seen snippets of my life as a little kid and did not know the meaning of them. Things are manifesting right now in my adulthood. Sometimes I take a moment to pause and say “Oh my God, I dreamed this.” It was not a conscious effort to dream. There were more of subconscious snippets that merged into other dreams.

Ash’s character is a well driven and focused public defender really trying to make a change in the justice system. She has an on and off friendship with benefits relationship with Christian Keynes’ character Charlie Riggs. Also, has a serious crush on her former law professor. Her employee, friend, and roommate Tracy is always there for comfort. A father who is strongly trying to get her to move to corporate. All these hurdles help shape Gwen Sullivan. She is a fighter and will not stop until justice is served. Aside from working in Hollywood, she advocates for young girls with less privileges in society. Currently, Ash co-stars in a movie Uncle Drew that will release this summer.