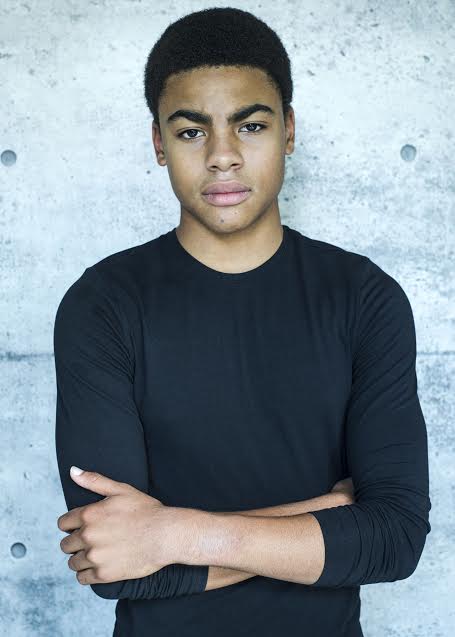 Entertainment News on May 25, 2018 0Likes At The Movies
ShareTwitterFacebookInstagram

Emmy-nominee Jadiel Dowlin stars on the new hit Nickelodeon show Star Falls. He plays the eldest sibling in the Brooks Family on the show. He was previously nominated a Daytime Emmy Award for Outstanding Performer in a Children’s or Pre-School Children’s Series. He got into acting at the age of 12. He started out making YouTube videos and people suggested that he try acting because of his seriousness. Dowlin used his experience from the Amazon show series Annedroids to deliver such a great performance. He feels his character Phoenix is calm, unique, and brings something different to the cast. Dowlin talks with us about his experience on Star Falls, college, personal philosophical viewpoints, and about his celebrity status.

ATM: Tell us about your character Phoenix.

JD: He is a really interesting character. Phoenix is the older brother of the Brooks family. They are a celebrity family that moves from

Los Angeles to Star Falls, which is a small area near where their father works. My character is really philosophical, spiritual, and a mediational type of male. He adds a huge spiritual perspective to the show. He over analyzes a lot. Phoenix is the kind of person all the other characters go to when looking for advice. I compare Phoenix to my own personality in a lot of ways. I am at Ryerson right now studying philosophy, which is one of my majors. Studying this major allowed me to understand how to play this character even better. It also allowed me to understand his perspective of the world.

ATM: Oh! So you are currently in school?

JD: Yes. I actually received a full ride scholarship because of my acting work and how I bring a deep mindset to the university. This was an honor.

ATM: Do you like Aristotle or Socrates? Who is your favorite philosopher? Why?

JD: Aw, man! I have to pick Plato out of all of them. The Republic is my favorite book of Plato. It is very interesting with him talking about justice, reform, what is good, and the feature of morality. All of these concepts are very interesting to me. I have always been intrigued by philosophers. I have taken it to the next level in studying it in academic ways.

ATM: I binged watched the first episode through the currently aired episode. My favorite scene with you is with the deck of cards. You are trying to convince everyone about shuffling. The cards went out on the table and you contest to not knowing how to shuffle. Describe the production process of this scene.

JD: This was the poker tournament episode. I actually play a lot of poker with my friends, but I loved shooting this scene. Before acting, I was kind of a magician. I did card and magic tricks. I do not even think this was in the script. Originally, I was supposed to shuffle the cards really well. They were teaching me how to do the shuffling. My hand slipped as I was shuffling and made the complete mess that drew all the cards all over the table. We actually thought that Phoenix seems like the guys who would not be good at shuffling. We thought to play with this idea. This was a creativity spur of the moment that ended up being funny.

ATM: Jadiel sounds like your character was tailored made for you.

ATM: When did you find out you would be a part of the cast of Star Falls?

JD: Last April or May. The thing that was cool about me playing Phoenix was when I found out about the scholarship to Ryerson. It was so amazing of how I was playing this character who was philosophical and deep but also going to study philosophical ideas in books. Meeting the cast on the first day was fantastic. The chemistry we have with each other works with Star Falls the most. It does not even seem like we are saying lines. We all feel like a family and the comedy really shows.

ATM: I can tell the awesome chemistry among you all. How did you balance school and working on set?

JD: There was a lot of juggling. Thank god this was not my first show. I have done other shows like Annedroids. My mom and dad helped to communicate with teachers and were supportive. It is a lot easier than you think it is. It is all about explaining to your teachers, them supporting you, and sending your work. The actor’s union provides a tutor onset to help you with your work. Every day you would have two hours to do homework, catch up, and do quizzes while still acting.

ATM: Your character reminds me a little of Kanye because of his aspect of free thinking. Phoenix’s free thinking comes out of nowhere. Explain more in depth how you embodied this character perfectly?

JD: (laughs) I took the knowledge learned from reading about philosophers to give me Phoenix’s mind space. I immediately thought of Jaden Smith as soon as I received the script at the audition. He is a teenager and a son of a famous actor. Jaden Smith is a free thinker. There is a video where he says a lot of philosophical things. He says things like “did you know it rains diamonds on Plato.”

ATM: Yes. Jaden Smith does say a lot of philosophical things as well.

JD: Exactly. So, this is what I tried to base Phoenix off of.

ATM: Tell us your perspective of your character Phoenix.

JD: He is a unique character out of all the characters on the show. Phoenix grounds the show along with a lot of exciting and funny characters like my brother Bo and my sister is a drama queen. Sofia who tries to set everyone on a date. Phoenix grounds everyone in qualities in bringing things down a notch and provides silence on a mature level.

JD: It relates to Phoenix a little. I am not super philosophical, but I do like my mediation. I study philosophical books. I still play video games and hang out with friends. I go for runs. I have been getting into writing. Your average kid. It takes time management and I am really just like everyone else.

JD: One of the coolest things that I got to experience while working on Star Falls is going to the Kids Choice Awards a few months ago. It was really fun because we were surrounded by celebrities. Seeing how big the show it is and experiencing the fun it generates. I met Mike Tyson and Jaden Smith here. There were a lot of celebrities sitting a few seats from us. We were sitting a few rows away from the main stage and Mike Tyson was sitting right behind us. We are new actors with Mike Tyson sitting right behind us. It was shocking. The show opened up opportunities and allowed us to experience things. Also, met the girls from Black-ish and some people from the film A Wrinkle in Time.

ATM: Are you aware that you are a celebrity yourself? (laughs).

ATM: You have an Emmy nomination. Well you are. If the people that watch the show see you, then they will go crazy for you too.

JD: This is something I have been dealing with more. I have worked on shows before. It was not until this one because it is so big and on Nickelodeon. My friends tell me I am a celebrity. I am getting 100s of DMs from people. Initially, I want to be known as a guy who does not think of himself as a celebrity but looks at his fans as people. I used to reply to the DMs.

ATM: You never are supposed to reply! You have those people who say can you make me famous or can you read my mixtape.

JD: Or can you make me a celebrity on Star Falls too. I have never considered myself a celebrity. I am just a guy who does his job. If people appreciate it, then great. You want to be down to earth. It is hard to reach so many people.

ATM: What is something philosophical that you still have questions about?

JD: Wow that is such a really deep question. This is a very tough one. It is a really profound question. We all question our purpose. This is the biggest philosophical question I can really put into words. I have a fan who really wants to be a singer and an actress. So, here the philosophical question would be what’s your purpose. The answer would be whatever you are good at. Something you keep on doing despite the rejection. If it meets these qualifications, then it is your purpose. People spend a lot of their lives trying to answer this question. It really comes to stepping back and really doing things. That is a really good question. It made me think. Wow. (laughs).

ATM: I think a lot of people go through life never finding their purpose. A lot of people imitate celebrities to try to do what they do, which makes them miss out on their initial purpose. It is serious because you can be doing things for 20 years and then realize woah this is not for me. You cannot get those 20 years back. You are still young, which means you can get into this career and then five others. The television industry is not for everyone, yet everyone wants to be a part of it. And we have you sitting over here saying “I am not a celebrity” (laughs).

JD: It is really interesting about what you added about everyone wants to get into it. A lot of people from my high school wanted to be actors after I finished a few seasons on Annedroids. I was like “If you wanted to be an actor, then you would have become one before I became successful.” You cannot want to do something in life when others are already successful. If this is the case, then you are focusing too much on the end result.

I have to say what a really deep conversation. All my other interviews were great, but none of them never asked me what philosophical quandaries do I grapple with. That was profound (laughs).

Dowlin’s character Phoenix brings us into the philosophical world. Aside from starring on Star Falls, Dowlin is exposing himself to new areas in the film industry. He is script writing on a few episodes on Dino Dana and has a few acting projects. Dino Dana is a parallel of Jurassic Park meeting Dora the Explorer in live action. A girl name Dina can see dinosaurs and takes us on a little journey while solving scientific problems with these dinosaurs. At 18, Dowlin will continue to inspire us through his acting.

Tune in Saturday nights on Nickelodeon to watch Star Falls.