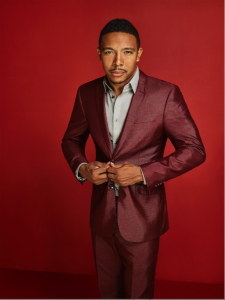 Spotlight on June 12, 2018 0Likes At The Movies
ShareTwitterFacebookInstagram

Allen Maldonado is known for his writing credits on Lebron James’ show Survivor’s Remorse. Currently, he is playing on TBS’, The Last OG. Maldonado also plays a character name Litty in the movie Superfly. Maldonado opens up about his experience working on the film and other projects.

California native describes his perspective of the new film, “It is a remake from the old version during the 70s. Also, seen as a black exploration film. Trevor Jackson, Jason Mitchell, and I star in the film. I play a character name, Litty. He is a trap rapper. You are not going to recognize me in this film. I have dreads and tattoos on my face. I look like the trap rappers of today. It was really cool to transform myself. The film is action-packed.”

Superfly star wants people to receive a good message from this film. “I know a lot of people who have worked very, very hard on it. I hope people have a good time telling their friends to go out to watch it. We worked long hours. Additionally, his character Litty takes on a different personality than his others. “Litty is a totally different version of myself. Especially the physical [experience.] He is absolutely an individual trying to be something that he is not. He exaggerates. He is a tough person trying to elaborate on the luxurious cars and the women around.

Maldonado also has his hands in other sectors of the industry. He has a new app geared toward getting short films. “Most short filmmakers go through this process of going to film festivals. There is this window where you can submit your film for 12 to 15 months. After this window, you cannot submit your film anymore. After this, my short film falls off the clip. There was no more mention of it anywhere. This heartbreak is what thousands of other short filmmakers go through. This is where my app goes in to extend on the exposure. We produce original content and series.

Maldonado owns a clothing company. “I designed the logo at 17. It was only four years ago when I decided to put it together. This is something to help create money for my kid’s foundation.” On the other hand, he has a two-week summer camp called Demo Nerds. “The first week I teach them acting [and other components to the entertainment industry.] Second, they get the opportunity to shoot their own film. We have a red carpet, gala, and press. They dress up in suits and they receive the whole Hollywood experience.

Maldonado co-stars in Director X’s upcoming film Superfly as a trap rapper. The possession of his character is different than some of his prior portrayals in films. This film has a unique star cast with people acting outside of their element, along with Future, Rick Ross, and Big Boi producing the soundtrack.