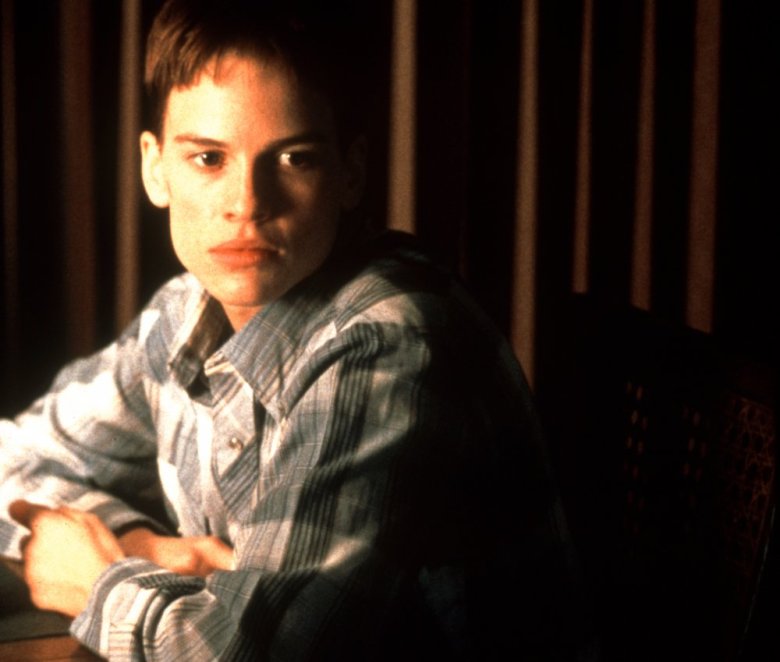 Extras, Movie Reviews on June 22, 2018 0Likes At The Movies
ShareTwitterFacebookInstagram

“Boys Don’t Cry” hits hard, and the reason why is heart-breaking: it’s all true.

The film is based upon the life of Brandon Teena, a rowdy transgender man (played by Hillary Swank) who’s always brawling boys and kissing girls up until his tragic murder in 1993 by a group of his friends who had discovered he was born female. Not only does “Boys Don’t Cry” depict a reality all-too-true for queer individuals, it was also released in the wake of gay teen Matthew Shepherd’s death in 1998 after he was beaten and left to die tied to a fence in Wyoming.

The harsh realities of gay hate crimes were finally making their way into public consciousness in the late 90s and a biopic like “Boys Don’t Cry” was the perfect vehicle to get people to care. For a movie to portray the dangerous situations that LGBTQIA+ people face every day progressed the conversation off-screen into a political one. Swank’s performance as Teena introduced the topic, and Teena’s real-life story brought the issue home to viewers. By bringing realism and truth to the big screen, it got mainstream media empathizing and talking about an issue all too familiar to queer and especially transgender-identifying individuals.

18 gay people were murdered in vicious hate crimes from 1990 to 1999 and Brandon Teena was one of them. He had just moved to Nebraska in 1993 to start his life anew under male pronouns and far removed of his sexually abusive, misunderstood childhood. His mother, Teena Brandon, refused to call him by male pronouns and believed he was just confused. She sent him to the Lancaster County Crisis Center in 1992 because she believed he was “suffering from a severe sexual identity crisis.” The rejection stemming from a queer youth’s parental figures is known to cause severe harm on the youth’s psyche, and can leave them with lifelong mental health issues, studies say.

When in Nebraska, Teena fell in love with Lana Tisdel and became good friends with John Lotter and Marvin Nissen, two convicts and mutual friends of Tisdel’s. After an arrest in December and detainment in jail, Teena confessed to Tisdel that he was born a female. Unfortunately, this is where the story takes a turn for the worse.

Teena was gang raped by Nissen and Lotter after they discovered his birth gender on Christmas Eve in 1993. Teena went to the police, but they refused to do anything of the matter even after a rape kit was utilized. The fact that Teena was transgender made law enforcement very uncomfortable and thus the sheriff made no arrest because of a supposed “lack of evidence.”

Nissen and Lotter discovered that Teena had went to the police and broke into his home on New Year’s Eve. The two shot DeVine Lambert, Teena’s roommate, in cold blood in front of her child as well as Teena. Nissen proceeded to stab Teena in the chest to ensure the fatality of his wounds. The two ran off but eventually were charged with murder and received life sentences for their crimes.

“Boys Don’t Cry” was a groundbreaking gay milestone in the film industry and was released the same year as other hits like “The Sixth Sense” and “The Blair Witch Project.” The film grossed $11.5 million on its measly $2 million budget and carried a message much larger than the big screen could hold. While modest compared to its gay counterparts – like 2005’s $83 million grossing “Brokeback Mountain” – “Boys Don’t Cry” touches on the topic of transgender identities with utmost respect and strength.

Hilary Swank took the role to heart and approached the role with method acting preparation; she lived as a man for a month, binding her chest with bandages, stuffing her underwear, and hitting on girls at bars much like Teena so frequently did. Swank’s dedicated commitment to the role landed her an Academy Award and Golden Globe win in 20000 for Best Actress, beating out Hollywood heavyweights like Julianne Moore, Meryl Streep and Sigourney Weaver. Not bad for an actress paid only $3000 for her role on screen.

Far beyond the typical tropes of transgenderism, the film dives into the complexity of masculinity and aspects of “passing” as a man in society. For once, the trans person on screen isn’t a joke or a simple gag carried out for the amusement of the audience. Rather, the trans person on screen is brave and confident within their own gender identity, enough so to visibly live as it. And for once, this trans person is a real person and not just a Hollywood role mustered up to profit upon.

The importance of “Boys Don’t Cry” should be obvious by now; it came at a time when trans people needed a voice and an ally to protect them from hatred. The film not only made Teena a household name through his tragic death, but also made way for protective legislation like 2009’s Matthew Shepard Act passed by President Obama that granted additional defenses for gay victims.

Even today, trans people are still ruthlessly attacked and murdered for possessing a gender identity different than societal standards. 25 transgender individuals were murdered in 2017 in the United States alone and is seemingly on the rise, despite Teena’s shocking death 25 years ago.