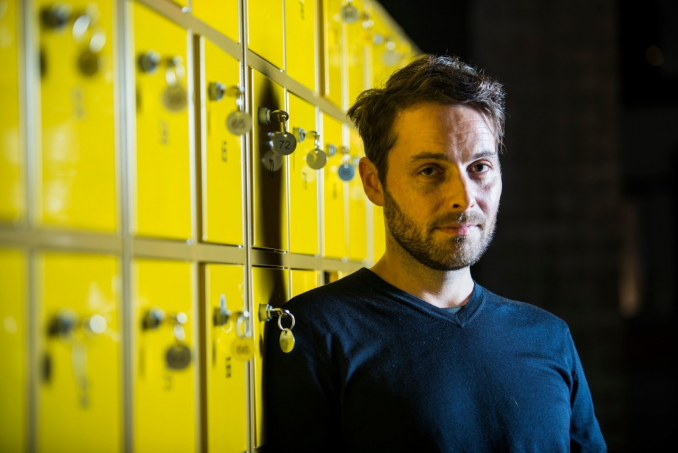 Reel 2 Real on June 20, 2018 0Likes At The Movies
ShareTwitterFacebookInstagram

Simon Lereng Wilmont recently directed his film The Distant Barking of Dogs. The film follows two young boys and their grandmother and how they live in the midst of a Ukrainian warzone. The boys’ mother died from a disease and was left to get raised by their grandmother. They are all familiar to canons and gunfire dropping over their heads. This is their depiction and definition of a normal life. Wilmont talks with us about the making of his film.

ATM: Your film was lovely. How long did it take to shoot this film?

SLW: It took me all and all 10 weeks over the course of one year and a half. I made it so that every month I could go for one week to shot.

ATM: What made you decide to do this type of film?

SLW: I made two short documentaries right before this one. These featured kids in the main character roles. These two films were both about kids coming to sink wells and living out of balance. They were trying to get their parents back. When I was finished with those two films I discovered there are children in the opposite premise. They live in unsafe worlds. I was interested to know where these children go to find stability and comfort. This led me to a conflict zone.

ATM:  Describe the intense psychological barriers that Oleg and Yarik are going through.

SLW: I think Oleg is one of the most fortune kids. His grandmother does a lot to shield him from the worse of the worries. This is the worst thing children suffer under. The constant threat of war and shells hitting them. The actual attacks are frightening as they may be. It is worse having this constant fear in you about when and where the attacks are coming. They get use to war in a weird way. This is not natural for a ten year old to tell the difference between bombs shot five or ten kilometers away. No kid should feel like this or have this kind of knowledge.

ATM: How did you confront them about the story?

SLW: I was traveling shooting my own film. I was with a translator. I went down to the southern part of the frontline. We talked to pupils in school and asked them a basic question about how it is to be afraid. This gives you a good indication of whether the child is emotional and able to describe these things. None of them could until I met Oleg. He was curious to watch me from the very beginning.

He said, “When the first cannon starts to fire I feel there is a cold hand that reaches into my chest. When the motors land and explode it crushes my heart. There is this small lump in my chest.” He was almost ten at the time. I knew this was my main character. It took a little while longer for their grandmother Alexandra to gain my trust. This was because there was a lot of talk and rumors going around in these small cities that people were posing as NGOs to steal people’s organs.

ATM: Explain how you upheld a strong demeanor while being in the midst of this corruption.

SLW: You know I did not really kept a demeanor. That is a really great question. I have never had that before. I was me and I reacted

how I would normally react. I was silent then I would fall to the ground under the shells. People could laugh at me if they wanted to. I did not care. As long as it helped a lot for them to trust me and to know this is Simon. In some situations, he is a coward and in some situations he is the best. That is a good question.

ATM: Compare and contrast your life a ten to Oleg and Yarik.

SLW: They are much poorer than we were. They live from what they grow in their backyard and from a small pension. If you put this aside, then there is a lot of parallel things that resemble my childhood to Oleg’s. I went to also bathe in rivers nearby and we shot slingshots. I had a childhood much similar to them, but no one dropped bombs on my head.

ATM: Explain their current situation. Are they still living like this.

SLW: Oleg, Yarik, and Alexandra still live in their village. There was a long time from Christmas onto March where the Russian elections were, and it was really quiet. The hope was blossoming really well. When the elections ended, and summer came, which are the times of war, unfortunately, it flared up a lot. It is not a nice place to live.

ATM: What is your perspective of the atmosphere while being on Ukrainian soil?

SLW: It is a weird place down there because the community starts to talk about politics and this the minute people do not want to talk to you anymore very early. It took me a long time to realize that it is also about these people not knowing which side they belong to. In a lot of ways, they become political and religious. They want people to stop shooting bombs over their heads. I did not get an extra Ukrainian vibe or Russian vibe. I never talked about Oleg, Yarik, or Alexandra about their viewpoint on politics. I was interested in the human story. Families like this exist on both sides of the front-line. My goal was to tell the story about what happens to these kids. Also, how can we have any thought about them when they grow to be 20 or 30 or 40.

ATM: Your film lets people see the different views of normal. This is their normal life. They would think our life is weird. They would hear about going to the movies and probably say, “What is that?” I like that the film shows different perspectives of the world. What happened to their mother?

SLW: Oleg’s mother died from a serious disease when he was five years old. Their grandmother Alexandra received full custody of them after she died.

ATM: There is no way anyone can help them?

SLW: That is a difficult question also.

SLW: I did not see to many help organizers or NGOs out there. The tragic part of this story is that Alexandra is caught between two very hard places. It is very terrible and hard going where she lives. Also, staying here for eternity. People coming back telling them this is not a good life. Life away from the frontline is even harder. She is debating whether this is the time to go, but there is no good alternative at all.

ATM: How old are the boys now?

SLW: Oleg will turn 12 this 27th of October. Yarik is three years younger, so he will turn nine.

ATM: Do you still communicate with them after the film?

SLW: It is easy actually. Outside of learning Russian, it is going very slowly. Still, it is enough with Google Translator and messenger. We write each other once and awhile to see how each other are doing. We manage.

ATM: What is their source of entertainment?

SLW: There is a lot of it. There are the politics things like bathing in the river and shooting with the slingshots. They watch Youtube the same as we do. They also have video games and television. I would expect they did not have so much power or internet, but it is not like that at all. They have a beautiful connection.

ATM: How did this film change your directorial outlook on making films?

SLW: I really enjoy working in conflict zones. People seem to be more true and live life in a much direct way. I think this has changed me in way that it is nice to see a film that gains a reputation and exposure. Maybe I am to romantic in a way, but it does change something. I was more cynical before.

It has been very good to talk with you. I must say you asked very completely different questions than why I am usually asked. It is has been so nice. I learned a lot.

Wilmont is currently following his passion for films. He received permission to film on the other side of the front-line. Wilmont wants to explore and show aspects of Russia. His storytelling allows watchers to have the opportunity to understand a life of normalcy through the unique eyes of kids.

The Distant of Barking Dogs shown at AFI DOCS and continues to be shown at film festivals around the world.