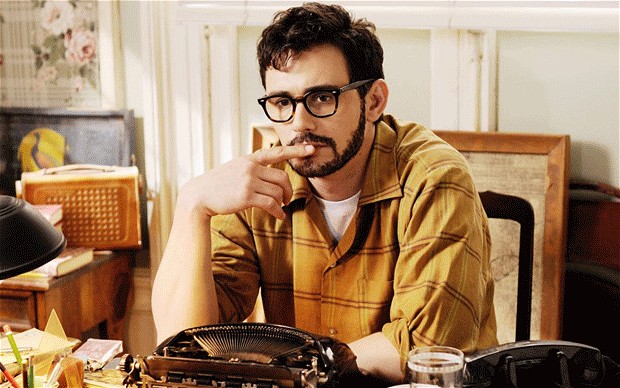 Movie Reviews on June 28, 2018 0Likes At The Movies
ShareTwitterFacebookInstagram

Following the trend of docu-dramas based on real life events, 2010’s James Franco-starring “Howl” is a visual-heavy take on famed gay Beat poet Allen Ginsberg’s classic of the same name. Aside from its hallucinogenic-inspired animations and illustrations, the beauty of “Howl” shines through its intimate detailing of its characters in their most private moments.

Franco plays a young Ginsberg in the 1940s/50s in the beginning of his writing career and subsequent legal issues surrounding the publication of “Howl.” Ginsberg was a leader for the underground writers of the San Francisco Renaissance, releasing poetry regarding taboo subjects never before discussed in mainstream media like homosexuality and drug usage. Alongside William S. Burroughs and Jack Kerouac, the Beat poet movement made a dent in public consciousness through their raw energy and high spirits.

The basis of the film starts with Ginsberg’s 3000-word epic “Howl,” a poem published in 1956 by independent book store City Lights Books for their Pocket Poets series. Ginsberg had met the owner of City Lights Books, Lawrence Ferlinghetti, in 1955 at a live performance of “Howl” and Ferlinghetti was so blown away by the piece that he offered to publish it.

“Howl” is a long, rambling poem that depicted the nightmarish, twisted love story of young gay artists in the squalor of city life. The blunt, sexual references and romantic lines of the poem painted a portrait of a starving artist, looking to make his big dreams come true. The poem begins with the line, “I saw the best minds of my generation destroyed by madness, starving hysterical naked, dragging themselves through the streets at dawn.”

Keep in mind this was the fifties, the same decade marked by housewives, hoop skirts, and Marilyn Monroe. Nobody dared to speak about sex in a public setting, let alone gay sex like Ginsberg was alluding to. His poem collection contained many sexual references and homoerotic themes, as well as rampant hallucinogenic drug use. Sure enough, the police soon caught wind of the raucously daring book and seized 500 copies of it and arrested publisher Ferlinghetti and bookstore owner Shig Murao for distributing obscene materials.

Murao was released, but Ferlinghetti was threatened with a $500 fine (almost $4500 in today’s currency) and six months of jail time if found guilty. The prosecution believed Ginsberg’s “Howl” would pollute the minds of the youth with its “sexual overtones and filthy depictions of society and homosexuality.”

Ultimately, Ferlinghetti was found not guilty of the aforementioned acts. His 1957 case, “The People of the State of California v. Lawrence Ferlinghetti” made national headlines and went on to become a landmark case for the freedom of the First Amendment as well as artistic expression of queer sexuality.

Residing Judge Horn remarked, “Evil to him who evil thinks,” in regard to the questioning of source material “Howl” as to being an obscene threat to society.

The modern “Howl” film finds Ginsberg (Franco) in the eye of the storm, faced with this heavy legal battle surrounding his own poetry pieces. Shot in two weeks on location in New York City, the film blends experimental elements of vivid animation with live action, conventional movie technique. We see Ginsberg writing “Howl and Other Poems” for the Pocket Poet series and witness him fight for his rights in the court room through Franco’s spot-on on-screen depiction of him.

It’s crucial for us during pride month to remember such a bold pioneer like Allen Ginsberg to create such an honest, courageous body of work that was so ruthlessly picked apart by the media and legal system. It was queer heroes like Ginsberg that gave us the right to create and write in blatant terms about our own experiences under the microscope of queer culture. Without “Howl” and without Franco’s modern retelling of the story, parts of our own gay history would be lost forever, and the future generations would never be able to understand the struggles our forefathers had to endure to guarantee our freedom of expression. Without champions like Ginsberg, our art would be censored by the law and never live to tell to see the light of day in popular culture.