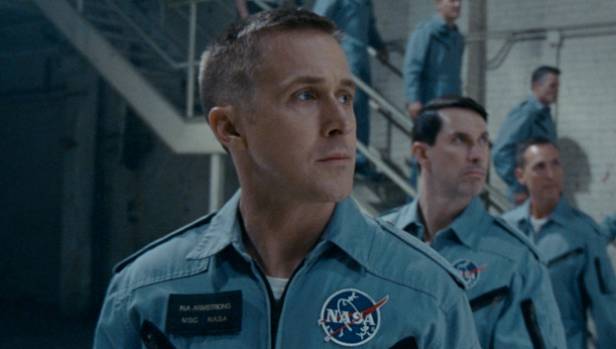 Entertainment News on June 28, 2018 0Likes At The Movies
ShareTwitterFacebookInstagram

“First Man” is a historical drama based on the Space Race, where the Soviet Union and the United States were battling to successfully land the first man on the moon after World War II. Gosling plays a young Neil Armstrong during the 1960’s leading up to 1969’s heart-racing Apollo 11 mission.

“After World War II drew to a close, a new conflict began. The Cold War [..] pitted the world’s two great powers – the democratic, capitalist United States and the communist Soviet Union – against each other. Space would become another dramatic arena for this competition, as each side sought to prove the superiority of its technology, its military firepower and its political-economic system,” writes the History Channel.

Based upon First Man: The Life of Neil A. Armstrong by James R. Hansen, Steven Spielberg (“Close Encounters of the Third Kind,” “E.T. the Extra-Terrestrial”) plays the role of executive producer and Josh Singer (“Spotlight”) is the screenwriter.

“First Man” will hit theaters on October 12. Watch the trailer below.