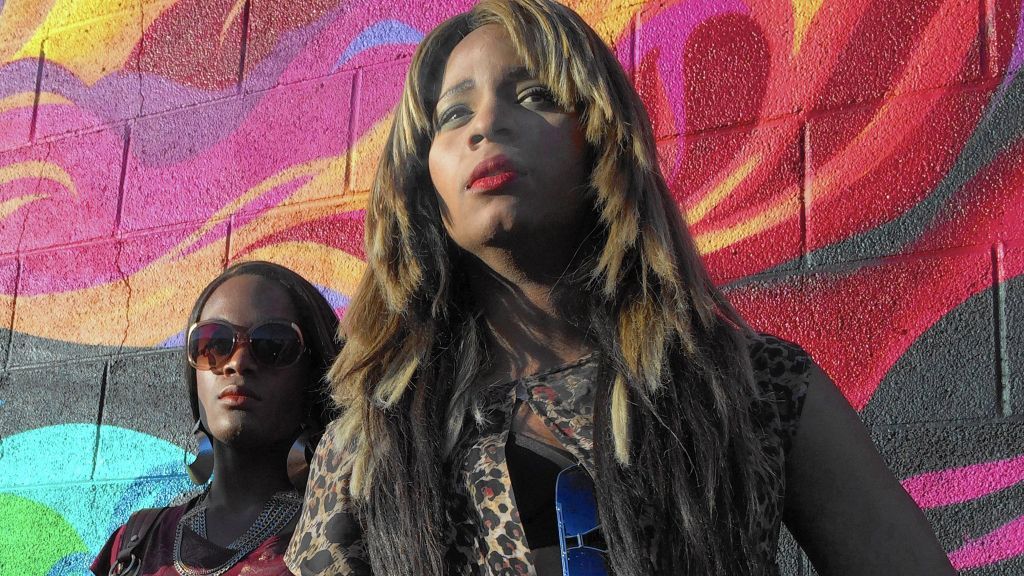 Movie Reviews on June 30, 2018 0Likes At The Movies
ShareTwitterFacebookInstagram

Less than 24 hours after her release from prison, black transgender sex worker Sin-Dee is looking for her pimp boyfriend Chester after discovering he cheated on her while she was imprisoned. Now she’s ripping up anything in her way on Christmas Eve in an attempt to hunt him down. One other thing, the entire film was shot on an iPhone.

2015’s biggest independent hit “Tangerine” was directed by Sean Baker and shot on three iPhone 5s smartphones as well as a clip-on lens and a mobile $8 video editor app. Baker’s take on a buddy comedy is a tad unexpected and very high-paced, equipped with an intense dubstep soundtrack.

Dazed & Confused called “Tangerine” the “the most important film of 2015” and notes the perfect timing of the film’s release, after the big screen’s “The Danish Girl” chronicled one of the first gender reassignment surgeries, Laverne Cox got her own wax figure at Madame Tussaud, and Caitlyn Jenner won Glamour’s “Woman of the Year” award.

2015 was a huge year for the telling of positive transgender stories in mainstream media. Gone are the days of crude caricatures of transgender individuals as nothing more than crossdressing “she-males” existing on screen just for a cheap laugh. For example, 1994’s “Ace Ventura: Pet Detective” with Jim Carrey saw extreme transphobia on screen for the sake of so-called “comedy” when Carrey vomits twice after realizing the individual he had kissed was transgender. He is so grossed out that he brushes his teeth with an entire tube of toothpaste and strips naked, burning his clothes in a trash can, crying in the shower. Such an extreme reaction to someone’s gender identity is not only tasteless, but offensive and further perpetuates negative mindsets and attitudes towards trans people.

Typical over-the-top “gross-outs” are nothing but harmful exposure for the trans community, let alone completely unnecessary. The refusal to accept an individual who doesn’t identify with their assigned birth gender is rudimentary prejudice and discrimination. There is nothing gross or vile about being transgender, there is nothing shocking about identifying differently than how society may see you. To classify people based on the genitals they possess is entirely inappropriate and insensitive. Gender is a spectrum and not everything is black and white, or in this case, male and female. There is a gray area indefinitely.

“Tangerine” is more than just a movie shot on an iPhone starring trans women. In fact, the least shocking part of the entire plot is the fact that both leading ladies are transgender. This is simply a tale of friendship, and doesn’t hinge solely on its characters’ transgender identities. It’s just a movie, not a trans movie. Sure, it has trans characters, but that doesn’t classify it as a one-dimensional genre. It’s just a movie, and a damn good one at that.

Rather, its kick lies in the frenzy of an angry black woman in search of answers and the truth. After spending 28 days in jail, Sin-Dee (Kitana Kiki Rodriguez) meets up with her friend Alexandra (Mya Taylor) at their favorite donut shop to catch up on what she’s missed. Alexandra lets it slip that Sin-Dee’s boyfriend with sleeping with a cisgender white woman and she goes on a rampage to find him and get her revenge.

Along the journey, there’s a police altercation, a brothel visit, an oral sex scene during a car wash, a musical performance at a dull bar, a curious Armenian cab driver, a crystal-meth indulgence, and a beautifully touching moment in a laundromat with some wigs.

Not only is “Tangerine” a staple for modern queer cinema, it’s also a laugh riot. And for once, the audience is laughing with us and not at us. The unfiltered banter between Alexandra and Sin-Dee is reminiscent of any two best gay friends cutting up and kiki’ing casually at brunch or the gay bar. It’s funny because it’s relatable, it’s funny because all gay people have crazy girlfriends like Sin-Dee.

The trans-led “Tangerine” breaks barriers for positive portrayals of transgender actresses and characters on screen, and makes for such a clever indie classic. I don’t know the last time the big screen saw a pimp witch hunt, but “Tangerine” surely gives the Salem witch trials a run for their money.

Watch the trailer below and watch the film here on Netflix now.

‘CODA’ Review: On the Waterfront