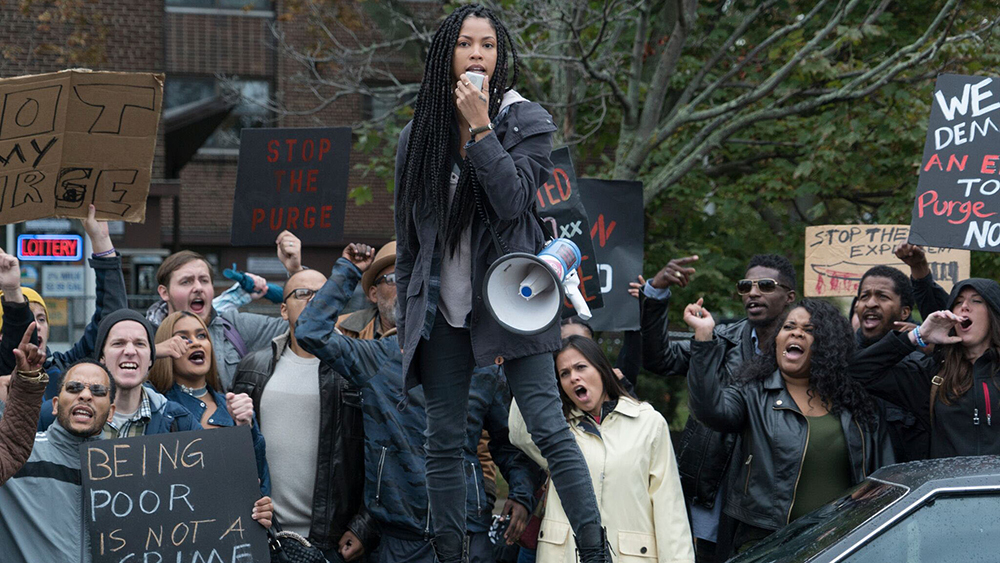 Movie Reviews on July 11, 2018 0Likes At The Movies
ShareTwitterFacebookInstagram

A far cry from the home invasion horror of “The Purge,” the newest addition to the franchise swaps out jump scares for serious race issues. Diehard fans may be turned off by the realism and politics behind the film, but it’s undeniable that what is acted out on screen happens offscreen as well.

The film acts as a prequel to the three other films, tracing the Purge Night tradition back to its very first run. Originally a social experiment in Staten Island organized by the New Founding Fathers of America, residents were offered $5,000 if they stuck around for the night. During the twelve hours in which the purge is taking place, all criminal behavior is legalized as a means of cleansing the soul of its sinful, darkest desires. People were encouraged to purge and would be given monetary compensation if they committed crimes that night, as long as they wore specialized contact lenses that recorded their activity.

Alas, what began as fun and games becomes increasingly deadly. When it’s realized that normal people don’t feel the need to purge, criminal activity is hush. With failure not an option, government funded gang members start appearing and mercilessly killing on the streets. The New Founding Fathers couldn’t carry out this experiment without participation and they want the whole nation to follow suit, so that’s why they send in reinforcements to make sure the purge is pulling numbers. This means innocent citizens are being killed by the government.

This corruption may be off-putting because it’s so familiar and realistic. While our government isn’t slaughtering us in the streets for the sake of a social experiment, but it is one that is known to hide a few secrets up its sleeves. It’s this practicality that makes this “Purge” film stand out for all the right reasons.

While the average “Purge” fan might be confused by the lack of bloodthirsty middleclass people, the lack of Hollywood allure and fantasy makes the film important. Social unrest, a huge theme of the film, is a common occurrence for many modern Americans disenchanted and disenfranchised by the current political climate. “The First Purge” confronts viewers with a white-washed government that would want nothing more than to eliminate the weaklings, or the impoverished people of color living in the inner city.

Racial tensions and socioeconomical unbalance seems to be on the rise lately. Since 2016, dozens of unarmed black men have been shot down by the police, President Trump has separated families and the #MeToo movement rocked society with sexual misconduct by heavy hitters in Hollywood. “The First Purge” offers an modern, empowered, predominantly POC view of the volatile world, well equipped with shocking murder, white supremacy, and nods to Tyler Perry.

Purging one’s soul is good. Catharsis is crucial when it comes to coping and dealing with stresses and emotions. Purging the world of cliché, tacky horror movies is good too, and “The First Purge” delivered a thoughtful which the genre hasn’t seen in a while.