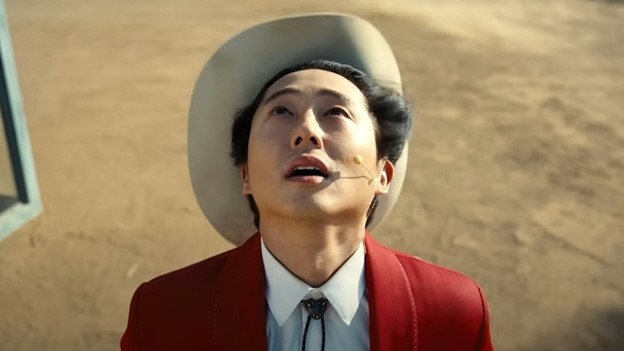 Holy hell. Jordan Peele somehow topped the innovation and extravaganza of his first two daring works, Get Out and Us, with a sci-fi horror romp that begs viewers to not turn their eyes away in the form of Nope.

Mr. Peele, a guy, messing with Keegan-Michael Key in sketch comedy a decade ago, has now turned himself into an ingenious auteur in the landscape of filmmaking. His respects for the past filmmakers that rewrote histories, such as Alfred Hitchcock, Steven Spielberg, and Stanley Kubrick, are perspicacious and enchanting. And yet, he still conjures up works that feel beautifully dark and fresh. Get Out told a disturbing tale of “a black man spending a weekend with his white girlfriend and her family,” while Us stood summed up as a “family becoming terrorized by their doppelgangers” daring feature. Even with basic premises, the compelling themes and commentary elevated both films from “another film in a long industry-packed line of them” to “events” wrapped around whatever alluring thoughts Peele wishes to explore and replicate onscreen.

Much like the marketing, Nope is a “what you see is what you get” feature. The story revolves around the Haywoods, a family of black ranchers who made a name by utilizing their horses for stunts in video production. However, out of the blue, one afternoon, father Otis (Keith David) suddenly and mysteriously dies after things fall from the sky. His two children, OJ (Daniel Kaluuya) and Emerald (Keke Palmer), are left to inherit the legacy he’s built while trying to salvage the ranch. But both soon come to notice that something eerie and inhumane is soaring above the clouds and head on an unsettling adventure to get the money shot (or, as mentioned, the “Oprah moment”) with help from tech salesman Angel Torres (Brandon Perea) and documentarian Antlers Hoist (Michael Wincott). Meanwhile, Ricky “Jupe” Park (Steven Yuen) runs a western theme park only a few miles away from the Haywood Ranch, who dealt with a tragedy on a set for a short-lived show revolving around a chimpanzee.

As mentioned before, Peele meticulously gives spades that spark memories of Signs, Close Encounters of the Third Kind, Jaws, Ghostbusters, Arrival, and many other features. He’s a pop culture sage, dropping allusions like candy while manifesting his thought-provoking ideas and philosophies in front of our eyes. It’s his manner of telling you not how but why to stare at such spectacle. Hence, the reason why we ventured out of our homesteads to witness another.

Philosopher Guy Debord once theorized that in our societies where modern conditions prevail, life itself presents as an immense pile of spectacle. It colonizes our perspectives, embracing the vision of having, not living out our social livelihoods. The ranch house and Jupiter’s Claim Park stay lined with photos of past TV and films, and Jupe’s traumatizing memories cannot be accessed directly, so he instead mentions a viral SNL sketch about it. It fulfills the theme that being alive is to be watched. And that rings true once the UFO takes center stage, with each character staring in awe and impulsively how to capture it on camera.

Peele brilliantly dives into a wicked commentary about the nature and grandiose of spectacle (even referencing Bible verse Nahum 3:6 at the beginning). When we envision how history plays out, books only do so much. So, humanity resorts to representations from the screen, disappointingly not reality much. So who or what gets our attention? How far are we going to go to attain it? And that coincidentally points to another damaging discussion where history overlooks those folks (or specific events) that have played a prominent role. Recall Eadweard Muybridge’s clip of a man riding a horse and the crew staying silent when Emerald mentions their family’s history had “skin in the game” because of their great-great-great grandfather’s contributions. There is more to the story regarding the mega events that shaped the world, be it the two World Wars or the September 2001 attacks.

Themes aside, every ounce of Nope feels integral and sensational. Kaluuya embodies the low-profile, masculine cowboy mantra while Palmer shines with exuberance. Their comedic, clashing rhythms are complementary, with Perea adding in further levity and Wincott surprisingly giving an endearing performance with his gruff voice. The score from Michael Abels remains nerve-shredding, combining veritable human screams that evocatively reminded of the tense, uncanny music in The Shining. And the California desert cinematography turns it up to twenty, thanks to Hoyte van Hoytema’s superb insight like he brought in Christopher Nolan’s latest works.

Could we nitpick about how Peele welters many tangents and ideas that it doesn’t bring about viscidity? Sure, but much like in Us, his craft vibrates with finesse and unique consideration. Some may not be on board with the third act’s pulling-out-all-the-stops gig, but it can quickly become overlooked when recognizing Peele’s (subtle) farcical letter to Hollywood with his third outing. To explain, he utilizes the template to criticize Hollywood cruelty and how the industry shatters dreams and unintentionally causes damage when trying to get “that one moment.” Like here, “that moment” causes undue consequences, whether behind the camera or the viewing audience, suggesting conflicts between principled costs and evident pleasures. Thus, Peele turns the unspeakable into the unseeable.

Maybe Peele trips over his high-mindedness and intentions at some points, but overall, he created another motion picture that feels rich and savory. It cannot be stressed enough how he managed to exceed expectations again, going 3-0 in the director’s seat. But, as mentioned a while ago, he is on that path to joining the rarified air of once-in-a-lifetime moviemakers like Hitchcock, Kubrick, Spielberg, and Quentin Tarantino. Dripping with momentum, he is primed to sit atop Hollywood’s brass rings for the foreseeable future.

Don’t go in to shout the four-letter word. Instead, scream the word “YES” when witnessing Nope.

They Are the Satanic Temple and They Are Mad as Hell

‘NO TIME TO DIE’ Review: Daniel You’re A Star