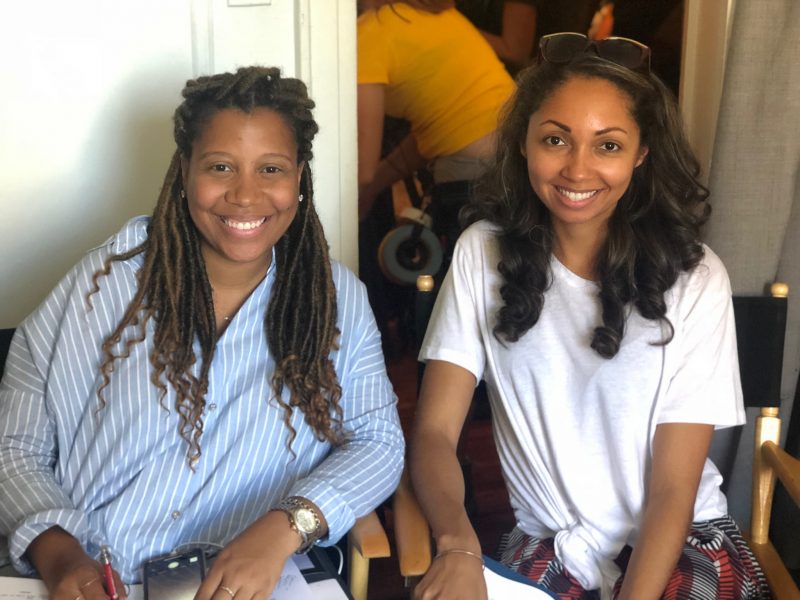 Reel 2 Real on July 17, 2018 0Likes At The Movies
ShareTwitterFacebookInstagram

Jasmin Greene and Marti Hines started out as college friends at Hampton University to now having their own production company called Dique Pic Productions. In 2015, this company was formed with the aim to bridging the gap of lack of representation for women of color in Hollywood. Their first film die Expats explored the foundations of friendship, love, and relationships. ATM sits down with the duo as their give insight on their current production Paper Friends that continues these narratives.

ATM: How do you want the element of friendship to create a response based on your film?

Jasmin: It really is about being in your mid 30’s and examining relationships in your life whether they be romantic or platonic. It

is about taking a look at where you are in your life, where your friends are, and where you expected/hoped to be and how these disappointments or actualizations affect your relationships.

ATM: Marti can you express more of what you took away from the film?

Marti: We are in our mid 30’s. Jas and I met in college, so we’ve known each other a while. Some of the relationships I had back then have changed, some relationships have faded.

Paper Friends gives you that feeling of wanting to reconnect to see if the friendship or bond is still there. This is what Paper Friends explored.

ATM: How are you all going to allow the film to let the characters understand that their college self is different than their adult self? This is constantly wrongly represented in films about reconnecting with old friends.

Jasmin: When they meet back up for the first time they see how personalities have shifted. For example, London was always a very confident, borderline self-centered person. However, as time has passed and certain dreams of hers have not been actualized, she has become darker, more stuck up, more bitchy. But through watching her journey you get it at the end-it really is tough to wake up one day, no longer in your 20’s with the world at your feet, and not have things you for sure knew you would.

Marti: You have our character Waverly who is still fighting for the dream she always wanted. She is an actress and was a drama major at NYU. They are reconnecting at 40. Waverly is still passionate and still on that road, trying to actualize her dreams although she has had no big breaks and is struggling. But as she’s gotten older she’s gotten even more passionate and more certain that this is the career and life for her and even though she wants to give up at times, its more important now than ever that she doesn’t.

Jasmin: My favorite scene is with our married couple, Carson and Ana. They have a huge argument in the middle of Times Square. A lot of hurtful things are said, but a lot of truth is revealed too. You feel for both of them.

Marti: I love the beginning of how we jump into them eating dinner, everyone is reconnecting after years, you get to learn more about each person and how they ended up there.

ATM: This film is a follow up from your die Expats. How did you think to take the exploration of love, lust, identity, and modern relationships to the next level with Paper Friends?

Marti: It is really about reflection. It is taking a look at the goals of when you are younger and looking at where you have fallen. It is not to become discouraged. I would hope that people use it for reflection.

ATM: From the components just described, do you see any pieces of yourself in one of the characters?

Marti: Jasmin that question is direct to you. (Laughs)

ATM: (Chuckles). This is a film about college friends who once attended NYU. You all both met while attending Hampton

University. Did you ever think you would still be friends?

Marti: There are ebbs and flows to all relationships. After graduation we did go our separate ways, living in different states. We reconnected a few years after college and kinda just picked up where we left off. And here we are now. {haha}

ATM: Wow. Describe the type of woman you all were while attending college compared to now.

Marti: Jazz, how would describe yourself or me? I know what you could say about me. Jazz was and still is happy. She has always been free spirited, a boho type with huge curly hair which she still rocks. She was a party girl then, and I think still is now, even as a mother she hasn’t lost that about herself which is cool.

Marti: I was so preppy in college. I was the one wearing polos and cardigans. I looked like a Tommy Hilfiger ad. We were so different from each other, still are. I thought I knew everything about the world. I became a party person as an adult. I guess that is where we have our similarities haha.

ATM: You have a character in your film that is desperate for a child. She wants kids and is purposely rude to men. What about family is the reason for this character’s possession of family so bad?

Jasmin: This character is at the point of waking up in life and not having the things she wanted by 40. A family is a big one for many and most of us. Through the years this what caused her attitude shift. There is a specific reason that elevates her bitterness on this subject, but I don’t want to give the movie away!

ATM: There is a quote on your website. This is a man’s world, this is a man’s, world / But it wouldn’t be nothing, nothing without a woman” I know you all understand this, but what your overview about the rest of the film industry that says this but lacks in hiring more women of color still happening. Please explain and expand.

Jasmin: This is why we started our production company because we see this as a huge problem. We are women of color. Our aim is to hire more women of color behind and in front of the camera with one movie at a time.

Marti: This is a great day to be a filmmaker of color. People are becoming more aware of what is happening in Hollywood. There is a need for representation. There are so much work and presence.

Greene and Hines plan on submitting their film in festivals and hope it starts a movement. Their creative production company derived from men having the central positions behind the camera and men obtaining the smartest roles than women of color. Aside from running a production company with Jasmin, Hines and Lola Wood are the founders of Wanderluxxe, a luxury concierge company in entertainment that offers the ultimate VIP festival experience with exclusive benefits and insider access for groups and individuals, with a newly launched membership program for unparalleled access.

For more information about the membership, follow Wanderluxxe on IG:  @wanderluxxemembers