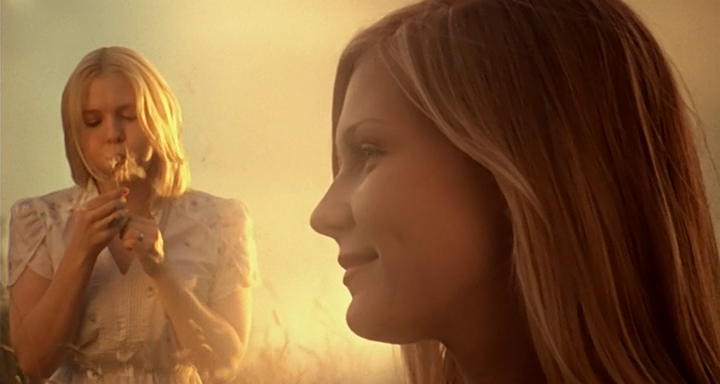 Extras, Movie Reviews on July 18, 2018 0Likes At The Movies
ShareTwitterFacebookInstagram

Sofia Coppola, filmmaker and daughter of legendary director Francis Ford Coppola (“The Godfather”), made her directorial debut with 1999’s “The Virgin Suicides,” a heartbreaking tale of sisterhood in 1970s suburban Detroit. Based on the novel of the same name by Jeffrey Eugenides, this sweet but sordid tale confronted taboo themes of mental illness, suicide, and virginity with utmost delicacy. Starring Kirsten Dunst (“Spider-Man”), the film is told from the perspective of the neighborhood teen boys who are utterly curious about the Lisbon sisters and end up falling in love with their allure.

“The Virgin Suicides” not only provides fragile yet poignant commentary on teenagerhood its complexity, it also accompanies the tragic love story with beautifully framed visuals. Join us as we examine ten gorgeous still moments from the film and discuss their graphic impact on the audience.

During a dinner scene at the Lisbon home, one of the infatuated neighborhood boys sneaks off to explore the sisters’ bedroom. Here on the door is an example of the spirituality of the girls, who decorate their room with religious iconography and tarot cards. Mysticism is not only enjoyed and practiced by the girls, it also cloaks them in mystery, as their private lives were never fully known or understood to anyone besides themselves.

After youngest sister Cecilia Lisbon attempts suicide by slashing her wrists in the bathtub, the family throws a party for the girls to celebrate her recovery and to boost family morale. Mrs. Lisbon invites the neighborhood boys over and they all drink fruit punch in the basement while she chaperones. During the party, Cecilia asks her mother to be excused, and proceeds to jump out of her bedroom window and impale herself onto the family’s fence, killing herself instantly. This is the last frame in which we see 13-year-old Cecilia alive, and the melancholy on her face is heart wrenching for the viewer to see.

Following the suicide of Cecilia, the sisters fall further into a depressed state. The priest from their church comes by to visit the home and give his best wishes, and it’s clear that mourning had taken a toll on the home and the girls, increasingly impairing their sense of reality.

The neighborhood boys get ahold of Cecilia’s diary and read it together, diving deep into the fantasy world of the Lisbon sisters. Along the journey they discover more tidbits about the girls and learn about their private lives: their likes, dislikes, and past experiences. Because the girls are so sheltered by their strict, religious parents, they are forbidden to leave the house except for school, which means they never get a chance to hang out with the infatuated boys. It’s whimsical, warm, bright shots like this that lend a soft glare to the film’s otherwise tragic tones.

In school, the girls become disillusioned and bored with suburban life. They cut class to smoke cigarettes in the bathroom and hang out together. While it’s obvious they are very angsty teenagers, they are also grieving the loss of their young sister and developing mental illnesses.

Soon, Lux Lisbon falls head over heels for bad boy Trip Fontaine. The two sneak away during school to kiss outside and hold hands. Their romance blossoms and unfolds on screen in a daydream of young love. For the first time, we see one of the Lisbon sisters happy and genuinely enjoying herself amidst the agonizing weight of suburban life under a strict, religious, oppressive homelife.

Uncharacteristically, Mrs. Lisbon allows the girls to go to the Homecoming Dance at school. Trip and Lux ultimately win the titles of King and Queen.

Here, Lux wakes up before dawn in the middle of the school’s football field. The night before was Homecoming, and Trip and her snuck away during it to have sex on the field. Trip had run off earlier, leaving Lux here alone after taking her virginity. Lux is hurt and takes a taxi back home, and her relationship with Trip falls apart. Her anguish and heartbreak play out on screen in this tear-jerking scene following such an intimate experience.

The sisters are punished for breaking curfew at Homecoming and are taken out of school by Mrs. Lisbon in fear that they are being polluted by their morally bankrupt peers. The girls are cut off from the outside world, forbidden to leave the house or have any taste of the real world. They grow restless and bored, disenchanted with the lives they were living cooped up in their house all day every day with nothing to look forward to.

The Lisbon sisters soon reach out to the neighborhood boys and begin calling them and playing their vinyl records through the phone as a way of conversing. Without any means of in-person communication, they rely on music and Morse code light signals to speak to the girls. A plan is hatched for the boys to come over one night, but when the time rolls around, the boys enter their home only to realize each sister had committed suicide. Following the suicides, Mr. and Mrs. Lisbon move away from suburbia, leaving the neighborhood without answers.