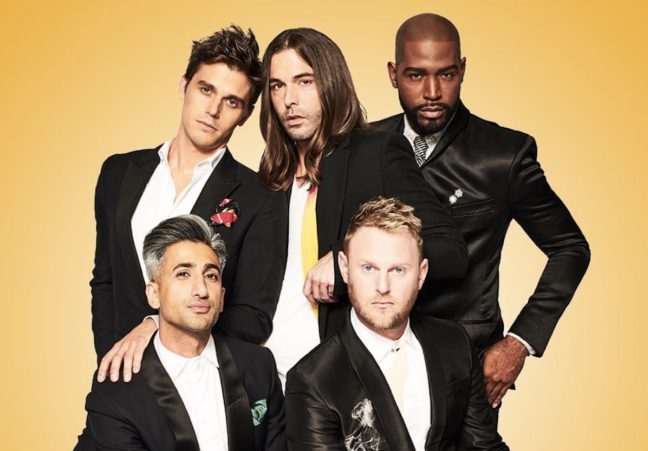 Since 2013, streaming service giant Netflix has released 141 forms of original television content ranging from docu-series (“Making a Murderer”) to comedy (“Orange is the New Black”) to crime (“Narcos”) to action (“Jessica Jones.”) Netflix also produces children’s content and exclusive movies, some of which have won Emmy’s (“13th”) based on their groundbreaking concepts. All of this is not bad for a company that opened its doors in 1997 with movie rentals.

Now while this endless sea of great programming and opportunities for viewing is great and all, it’s easy for viewers to get lost or feel unsure about what to watch. But among it all is the lighthearted, family friendly “Queer Eye” that stands above the rest.

A modern riff on the Carson Kressley and Ted Allen starring Bravo series, “Queer Eye for the Straight Guy,” the show focuses on transforming everyday people into more confident visions of themselves. Whereas the original series heavily relied on physical makeovers and superficiality to make their point, this new batch of fresh-faced, all-knowing gay men offer a lot more to the table.

Tan France, an English Pakistani Muslim, studied fashion at Doncaster College in South Yorkshire, London and founded his own clothing line in 2011. His knowledge of style lends a helpful gaze to the guys in the direction of what not to wear. France is the most reasonable of the bunch and his levelheadedness keeps the whole crew above water.

The team’s designated culture guru is Karamo Brown, who has quite an eclectic resume. A practicing psychotherapist, Brown’s past ranges from co-founding educational HIV organization 6in10.org, producing video content for The Huffington Post, appearing in the 15th season of MTV’s reality show “The Real World” in 2004 as an openly gay person of color, and even being an extra in 2001’s “The Princess Diaries” behind Anne Hathaway. Brown is the guy with the best advice and the biggest heart, offering important tidbits to all the guys undergoing transformations from the inside out.

Small town born and raised interior designer Bobby Berk started his career when he moved to New York City in 2003 with only $100 to his name and found work at a home furnishing store. He worked his way up the corporate ladder to become creative director of furniture brand Portico before founding his own high end interior design store, Bobby Berk Home. His store has since grown from an online retailer to having retail stores in New York, Miami and Georgia. While Berk may be the quietest in the group, that’s only because he’s with four other crazy queer queens.

Fan favorite Jonathan Van Ness started in Los Angeles as a personal assistant at a hair salon after flunking out of college because he would regularly skip class to watch “The Golden Girls” reruns. He was the first male cheerleader at his high school and from his work at Sally Hershberger Salon got him started producing content for Funny or Die in the form of sketch comedy series “Gay of Thrones” which parodied “Game of Thrones.” He has also been hosting his own podcast since 2015 and still works at a salon in L.A. It’s Van Ness that provides the show with the spunk and the sass that has infiltrated popular culture, it’s him that’s to thank for all the gloriously gay GIFs and hysterical one-liners.

Canadian heart throb Antoni Porowski was the personal chef to one of the original “Queer Eye” guys, Ted Allen, and is a self-taught cook inspired by his grandmother. He is also a model and actor, having appeared in six movies plus an upcoming role in Josh Boone’s (“The Fault in Our Stars”) new film set for a 2019 release. Porowski is in the middle of writing his own cookbook and opening his own restaurant in New York City. He’s the eye candy of the group and constantly has “Queer Eye” fans drooling over his thirst-trapping Instagram posts.

This spectacular group of guys brings a cheery ease, a breath of fresh air to the series from the 2000s. The original series’ New York City location was swapped out for Atlanta in this reboot, offering a Southern kick of wide-ranging personalities and spice.

Much different than its predecessor, “Queer Eye” spends more time creating naturally pure moments of inward reinvention and less time creating a spectacle. The journey is spiritual in a way, bringing the viewer along as this new Fab 5 share tips and tricks on how to improve the quality of life through simple self-care. Viewers have grown to love the Fab 5 because of their honesty and good intentions, focusing more on inward beauty than a drastic, outward change. The guys spend less one-on-one time with the men they’re transforming and instead, work as cohesive group to make sure all things just keep getting better.

With a fresh new cast, location, and direction, “Queer Eye” contributes wonders to Netflix and proves the impact of the streaming service’s ability to change lives. It’s like a pseudo-self-help show and audiences worldwide can’t help but become engrossed in the boisterous shenanigans of these five gay men looking to make the world a better place, one “Yas queen!” at a time.

We need “Queer Eye” in 2018 because we need change. Rather than rolling up in the fetal position and giving in to the societal pressures and political collapse of democracy, we need more loud, vocal, proud gay people in the public eye to let their existence be known. The era of hiding is over, and queer visibility is demanded before it’s too late. By coming out of the closet and prancing into the spotlight, queer individuals like the Fab 5 of “Queer Eye” are proving that America needs to be made gay again.

“Queer Eye” seasons one and two are available for streaming now on Netflix.

Don’t go far into the woods because you may dissapear