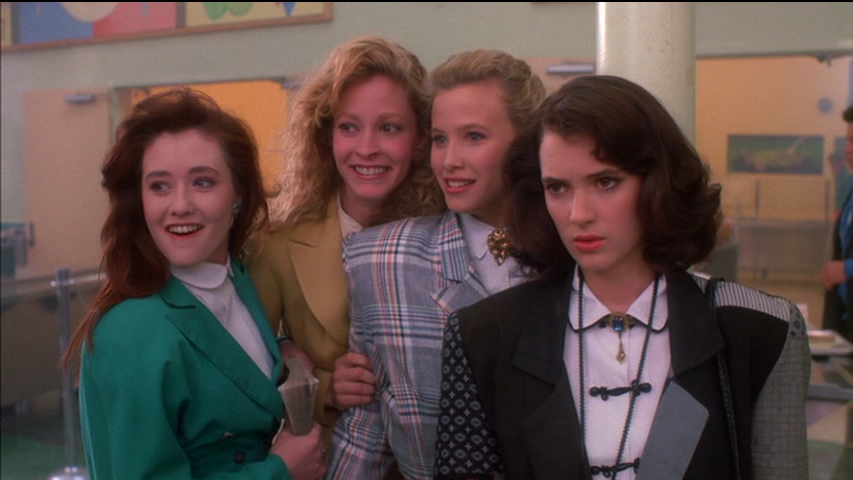 Extras on July 20, 2018 0Likes At The Movies
ShareTwitterFacebookInstagram

1988’s teen comedy “Heathers” didn’t make an impact upon its release 30 years ago, but now remains a cult classic of 80’s black comedy. Starring Winona Ryder and Christian Slater as two teenagers spiraling into trouble and murder, it has since gone on to inspire a musical and even an ill-fated television series.

“Heathers” was truly ahead of its time and even provides a satirical viewpoint on the hotbed issue of gun control and its impact on school shooting sprees. Join us here on At The Movies Online as we discuss ten stills from the film and discuss their importance for the viewer and to cinema as a whole.

Winona Ryder’s character, Veronica Sawyer, belongs to the most popular clique in school, so why is she so unhappy? Well for one, her friends are mean girls who like to rule the school with an iron fist. It’s evident from the start that Sawyer is nothing like the girls she hangs around, proved here by her walking through the halls of school like a ghost. She’s out of place and unhappy with her place in the world, a feeling many audience members can relate to at that age.

…Like the killing of Sawyer’s friend and most popular girl in school, Heather Chandler, through poisoning. What began as a sick joke to get Chandler in control actually became a full-fledged murder. Chandler consumed liquid drain cleaner and collapses to the floor, falling through her glass table in the process. Sawyer and J.D. stage her death as a suicide to evade responsibility and conviction for the crime.

The couple then kills their school’s star football players, Ram and Kurt, and again, stage it as a suicide. Except this time, it’s posed as a gay suicide pact because their love was too taboo to pursue amidst their popularity. The blue tones used on screen provide a dark underbelly to the suburbia common in melancholy coming-of-age films like “The Virgin Suicides.”

Sawyer is falling further into trouble and J.D. is nothing but happy about it. The day after Ram and Kurt’s murders, the two sleep in her car and she willingly burns herself in the center of the palm to symbolize a Christ-like martyrdom. J.D. proceeds to use her burn to light his cigarette. These absolutely absurd, comical yet crude scenes perfectly epitomize their violent relationship and Sawyer’s desires to escape it – alive.

When Sawyer’s fellow popular friend, Heather McNamara, attempts a drug overdose in the bathroom during class one day, Sawyer stops and saves her life. While its technically a comedy, the events on screen of “Heathers” bare a lot of weight in real life, as posed here as the threat of suicidal tendencies. McNamara is grieving the loss of her best friend, whether she was evil and manipulative or not, and we are witnessing her struggle with death here.

With Heather Chandler dead, Heather Duke utilizes the opportunity to take her spot as most popular girl in school. Here she is basking in the sunlight of this new opportunity to abuse her newfound power.

In a dream sequence, Sawyer is visited by the late Chandler dressed in Beetlejuice-esque goth couture. Sawyer is plagued by the responsibility of having a role in three deaths thus far, and her inner conscious is using her dreams as a way of coping with this stress and guilt.

Sawyer fakes a suicide by hanging in order to get J.D. to leave her alone. With her out of the picture, J.D. would have to continue in his criminal spree alone, without further implicating Sawyer as his righthand. Sawyer keeps the acting tight until her mother walks in the room and announces it’s dinner time.

In the final act, J.D. attempts to blow up the school but Sawyer saves the day. Instead, J.D. commits suicide by strapping the bomb to himself and exploding in front of their high school whilst standing in a Christ position. Now this time, Sawyer has a cigarette in her mouth and uses his death to light it whereas previously he used her burn wound to light his. It’s these subtle references to the story of Jesus Christ that gives the film a second, more biblical significance. And thus the film comes to a close.