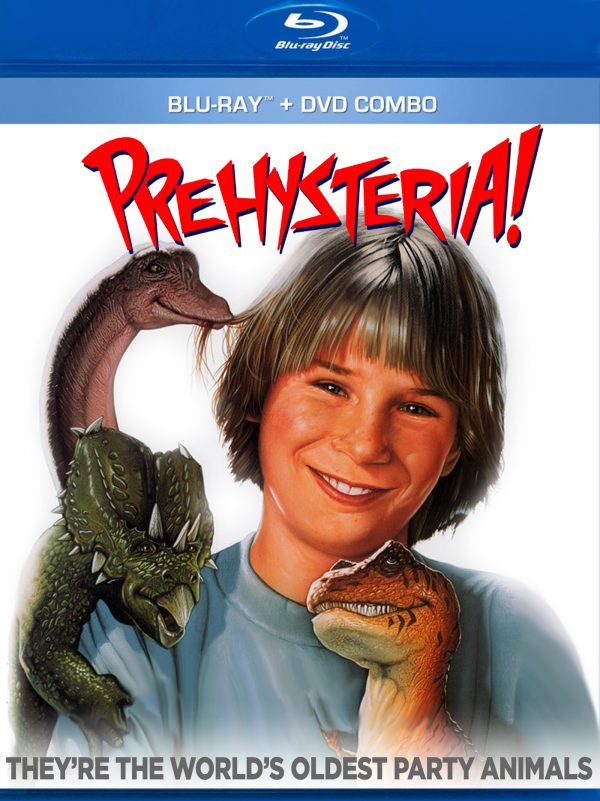 Uncategorized on September 24, 2018 0Likes At The Movies
ShareTwitterFacebookInstagram

Full Moon Features is best known for its catalogue of horror films which include the horror classic, The Puppet Master. Founded by director/producer Charles Band in the late 80s, Full Moon Features has a little known secret – Moonbeam Entertainment. During the 1990s Moonbeam Entertainment was the outlet for Band’s science fiction, family friendly movies. Now Full Moon Features will be releasing several of these films to DVD for the first time. The classic 1993 movie Prehysteria has been remastered from the original 35 mm negative and will soon be available to a whole new generation of dinosaur lovers.

Jerry Taylor (Austin O’Brien) is a 12 year old boy whose dog accidently brings home a cooler filled with rare dinosaur eggs that were recently found in the rain forest by an evil museum curator named Rick Sarno (Stephen Lee).  The eggs hatch and the Taylor family find themselves care takers of a group of prehistoric animals.  The family names the dinosaurs after their favorite rock and pop stars (Elvis, Madonna, Hammer, Jagger and Paula.)  Parenting baby dinosaurs is not easy and all types of mishaps and hilarity ensure.

Every great story (and movie) has an evil villain. Rick Sarno will do anything to get his priceless eggs back. When he discovers they have hatched, he schemes to put the animals on display.  The Taylor’s don’t want their precious pets to be locked up in cages and fight Sarno for the safety and survival of the dinosaurs.

Prehysteria arrives October 9th and can be ordered here.