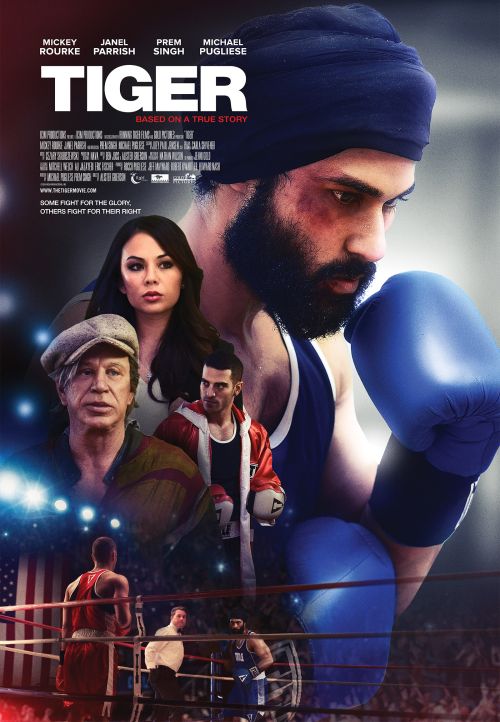 The Will Of The ‘Tiger’

Uncategorized on October 4, 2018 0Likes At The Movies
ShareTwitterFacebookInstagram

How do you decide between your passion and your religion? Prem Singh and Michael Pugliese wrote and starred in the film Tiger where a Sikh Boxer named Pardeep Singh Nagra has to pick both in order to stay true to himself.

ATM: How can people who are indifferent make their authenticity seen?

Michael: It comes down to being yourself and not being afraid to show who you really are. In regards, to the film Tiger, Pardeep Singh Nagra struggles to love himself before he can show others who he is. This is important especially during a time when there are social media

Prem: You have to love yourself. A lot of people have a tough time with themselves, asking “How should I love myself?” “What does this entail?” When you do follow the story, he comes to move forward for self-acceptance and finding himself.

ATM: How should a first-time boxer watch this film?

Michael: Boxing is a combat support. You have to be aware of who is in the ring. Boxing is the undertone to the film. It is a coming of age story about a boy coming into being a man. It is about standing up for one’s belief.

ATM: What would you all do if you were stuck with a decision between your religious and your passion?

Prem: It is not easy. It comes back to knowing what you want and how far you willing to do get what you want. Some people will give into their beliefs. Some people will go get it at any cost. You have to find this for yourself. This is what Pardeep Singh Nagra struggles with. To others, what he believes is easy and simple. To him, it is a struggle. You cannot choose. It depends what is more important to you in terms of what you believe in or what you stand for. Pardeep Singh Nagra cannot pick, so it fights for both. Why can’t he have both? Why can’t you have what you believe in and have what you want?

ATM: What is something you can never go a day without doing?

Michael: Talking to Prem. I have to talk to him once a day. It is really about what truly makes you happy. Working in film, with Prem, and inspiring others to do something great is something I cannot go a day without doing. This gives us fulfillment.

Prem: This is like our fix. We are just so a passion for films. We talk to each other every day. It is something we do on a daily basis.

ATM: When did this early passion for film start?

Michael: At a young age. I was always trying to entertain people. I was always trying to get in front of the camera in past family home videos. I would also grab the camera. I started to do drama and it evolved into doing a few plays. I got myself an agent in Toronto. I met Prem in acting class. We had the same goals and desire. I love to make beautiful art for the audience to enjoy.

Prem: I used to watch R-rated movies as a kid. I was not supposed to. I always thought what the action guys were doing was cool. I thought it was the coolest job in the world. My mother explained to me that these guys are actors, and this is what they did for a living. I knew this was actually what I wanted to do. I continued to grow up and watch how cinema captivated an audience. This is the moment I knew this was what I wanted to do. I went through drama class.

Michael: This is a good question. Prem and I are really into feature films, acting, and performing. We wanted to try creating our own project and work. We wanted to find roles that inspired a beautiful story. Doing a documentary was never a thought.

Prem: It would not have gotten a lot of exposure similar to films. Tiger’s message could get spread more in a feature film.

ATM: How does this mirror the controversies seen in society today?

Michael: You have to turn on the T.V and listen to the news. There are a lot of domestic and negative things in the news. Tiger shines a light on religion. You see a lot of hate crimes and

discrimination on the Sikh religion. It is really sacred to them to grow their beards and wear a turban. We are trying to educate people about this. We want to inspire people to stand up for their own beliefs such as skin color, race, sexuality, or a job. Look at Kaepernick. He risked it all for kneeling for his beliefs. At one time, he felt like the world was against him and his back was against the wall. Look at him now. He is the face of Nike and has like 3 teams wanting him. You have to stand up for what you believe in no matter want happens.

ATM: The word tiger is a metaphor for the character, meaning fearless. Where do you see the tiger in you?

Prem: Our whole journey. We had to have the tiger in us for the film’s journey. We were actors struggling to get something off the ground and producers to read our script. We were told no. We have struggled with this in our lives and what we wanted to become. The tiger has been with us since the beginning.

Michael: And you have a tail {haha}. We had to be aggressive and fight for what we wanted. We have a production banner called The Running Tiger Film. There is no stopping a tiger when it is running. This shines a light on the film. Pardeep Singh Nagra is a tiger in the boxing ring and also in the things he believes in. We are hungry for good content and trying to make an impact. This is where the tiger is ignited in us.

Megan Hutchings on BET’s “In Contempt”