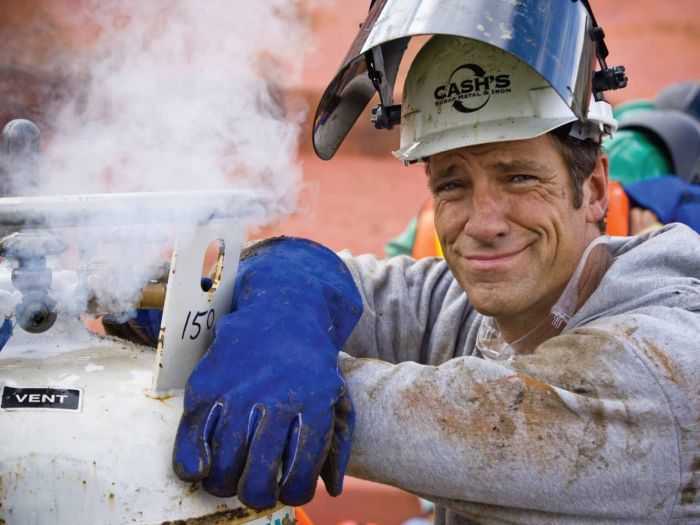 Returning the Favor with Mike Rowe

Uncategorized on October 16, 2018 0Likes At The Movies
ShareTwitterFacebookInstagram

Mike Rowe’s show Returning the Favor on Facebook Watch is an example of great humanity. Rowe speaks with ATM about his desire for helping others.

MR: Well, if I’m going to make content, I might as well put it in a place where I know people can find it, right? Facebook already has 2 billion customers, and everyone I know has a smart phone. I don’t think television is going away, but I’m pretty sure the future of content is going to unfold online. More importantly, Returning the Favor – like every other show I’ve ever worked on – is programmed by fans of the show. Ever since Dirty Jobs, I’ve relied on viewers to suggest my next adventure. My Facebook page has over 5 million people, so it’s real easy to stay engaged with the people who actually watch the show and ask them to help program every episode. Returning the Favor is really a show for them.

ATM: What is your earliest memory of someone doing a good deed to you?

MR: Does good advice count as a good deed?

MR: Well, when I was 16, my grandfather gave me some very good advice. He was a skilled tradesman who everyone admired a great deal. He only went to the seventh grade, but the man could literally build or fix anything, and everyone loved him for it. I was convinced that I was going to follow in his footsteps, and he allowed me to apprentice with him as a kid on all kinds of projects. Problem is, the “handy” gene is recessive, and what came easily to my Pop didn’t come easily to me. One day, after watching me struggle on what should have been a really simple project, he pulled me aside and said, “Mike, if you want to be a tradesman, you can be a tradesman. But you’re going to need a different toolbox.” At the time, it really broke my heart.

MR: Because sometimes, the truth hurts. I always think of the people on American Idol who dream of being a pop star but can’t sing. Their auditions are so painful. Many of these people were encouraged by well-meaning parents and teachers to “follow their dreams” and never give up on whatever it is they love to do. Then, suddenly, at 25 years of age – they’re told they don’t have what it takes, and they’re devastated. Well, that was me. It had never occurred to me that just because I love something doesn’t mean I can’t suck at it. But of course, that’s exactly how life works. Anyway, once I got over the initial disappointment, I went about the business of figuring what I was good at. It took a while, but thanks to a local community college, I was able to experiment with all kinds of classes and vocations I’d never considered before. I studied writing, singing, public speaking, narrating, and acting. I learned I was good at some of those things and started pursuing them. In time, I got myself a new toolbox, and went to work in my chosen field. My grandfather’s advice was a good deed – a very good deed. It put me on a path that brought me here.

ATM: Why do you love to give back and help people?

MR: I do what I do because I enjoy it. Helping people makes me feel good. Producing shows that that “give back” also makes me feel good. That’s why a run a foundation and a scholarship fund. But make no mistake – I get paid to produce the shows we’re talking about.  Dirty Jobs, Somebody’s Gotta Do It, The Way I Heard It, and Returning the Favor…these are all “for-profit” ventures. Having said that, I guess I’m attracted to projects like Returning the Favor because our country is divided.

MR: Politics have crept into just about every topic and every conversation. People are sick of talking heads screaming at each other on TV. They’re tired of scrolling through their news feeds and seeing angry rants from people they used to call friends. Honestly, I think America is desperate to watch something positive. For that reason alone, Returning the Favor is succeeding. But the show is also working because it’s real. It’s a short, light-hearted look at real people doing nice things for their community. Plus, we document the making of each episode, so you don’t wind up with some overly-produced, manipulative mess that pulls on people’s heartstrings unnecessarily. It’s just a fun, light-hearted reminder that good people still walk among us.

ATM: Because you travel so much, did you ever like adventure as a child?

MR: Sure. I was in Boy Scouts as a kid, and we traveled all the time. Camping, hiking, white-water rafting, hunting, fishing, sky-diving…we went all over the place. In those days, The Boy Scouts – my troop anyway – was really a gang of daredevils run by a former Colonel. It was a great way to prepare for life on the road. It was also the place where I learned the importance of things like personal responsibility and delayed gratification.

ATM: So, did you make Eagle?

MR: I did. In fact, I became a “Distinguished Eagle’s Scout” several years ago. I’m not sure what I did to “distinguish” myself, but I was honored to see my name alongside astronauts and Presidents and various other luminaries far more accomplished than I. I think it was probably the fact that my foundation reflects a lot of the philosophy that the Boy Scouts still embrace. I think they also appreciated the fact that I sent out 50,000 letters to other Eagle Scouts over the years, congratulating them on their success.

ATM: You have a good heart!

ATM: It is nice to take the time to send out all those letters.

MR: I guess it was a way for me to “return the favor” to an organization that made a difference in my life a long time ago. I think it’s important to remember the people who help you along the way.

ATM: Is that why you started a foundation for skilled labor?

MR: Yep. mikeroweWORKS evolved out of Dirty Jobs back in 2008. It started as a PR Campaign for jobs that don’t require a four-year degree.  Really, it was a way to say thanks to the industries that allowed Dirty Jobs to become a successful show – industries that were struggling to attract skilled workers. It was also a way to acknowledge my grandfather, and his influence on my life. Today, I use mikeroweWORKS to remind people that over 6 million jobs are currently available to anyone willing to master a useful skill. We also award scholarships that pay for vocational training. We’ve raised over 5 million dollars so far and hope to do a lot more in the future. In fact, if your readers want to learn welding, plumbing, electric, or any of the other construction trades, they’re welcome to apply for a work ethic scholarship at mikeroweworks.org.

Frida Farrell Takes Us into ‘Apartment 407’