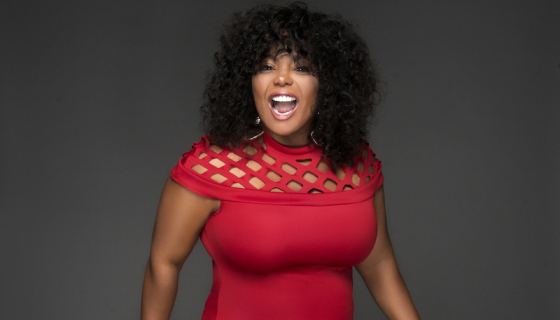 Cocoa Brown on Sexism and Blackness in Comedy

Interviews on October 20, 2018 0Likes At The Movies
ShareTwitterFacebookInstagram

Cocoa Brown speaks about her passion behind comedy. She makes you wonder what it even means to be a woman and a black woman in comedy.

ATM: When did you get attracted to comedy and knew you could do it?

CB: It happened in 1997. I had graduated college and a friend of mine introduced me to a guy who owned a comedy club in DC. He invited me to open mic night and I went. The rest is history. I found it so free to be able to go on stage and be me. And to say what I wanted to say. I realized comedy was just not getting on stage talking trash and that there was a formula to it. It has become even more fun for me.

ATM: What’s your best memory and experience on the show For Better and For Worse?

CB: One of the best experiences I had on this show was working with Bobbi Kristina and playing her mother. And watching this girl channel the pain of losing her mother into her character. She was a natural. She had no training and just knew how to peel back the layers and be authentic. It is a shame we could not see more of her. I think this was one of the best moments of my life. Watching her use what she was going through to make her character so real.

ATM: What do you feel is the representation for black women in comedy today?

CB: Right now, it is Tiffany Haddish. They are realizing we are more than stereotypes. You cannot put us in a box like they have been trying to do for years. They are realizing we have come to play too. We still have a long way to go. They still act like one can be winning at a time. In the meantime, I am glad the doors have cracked open.

CB: I usually start my set with what I am feeling. I have been blessed to learn from the best just over time. I have been in this business for about 22 years. I have learned how to take the bad day on stage and still make it relatable and funny.  I have gotten through so many traumatic experiences in life because I have been able to pick up a microphone and go on stage. My divorce, this business, and childhood stuff. I was able to heal myself through the ability to get on stage in person. I have been blessed with the gift to make it funny even though it is very real. And I think about my check too. I want my check.

ATM: As a child what black women in comedy or on a television show did you like?

CB: I grew up sneaking to watch Benny Hill as a kid. I loved Benny Hill. I did not understand the gist of just how nasty he was until I got older. Me and my cousins used to watch this and just crack up. Every joke he had had a sexual undertone. I grew up loving Sanford and Son and Aunt Ester. I grew up loving Willona Woods off Good Times. Can you be black and funny? Yes. It is weird because I never thought about being a comic while growing up watching these shows. It is funny now that I look back because they were all kind of molding me and inspiring me. God knew my destiny long before I did. I used to love Gilda Radner from Saturday Night Live. I used to love Ellen Cleghorne and watching all of them on Saturday Night Live. We had In Living Color. Who did not love T’Keyah Crystal Keymáh, and Kim Wayans? All of them were just so funny, authentic, and hilarious. When Def Jam came out, oh my god. You had your Laura Hayes, your Yvette Wilson, and you saw all these sisters telling jokes. Even then I never knew I was going to be a comic. It was so ironic that watching this I never knew it was going to mold who I was going to become.

ATM: How would you describe your personality as a comic?

CB: I have been called everything from the Milly Jackson of comedy to the Iyanla Vanzant of comedy to Preacher Brown to Professor Cocoa. I guess because I do not tell jokes, but I tell the truth. My set is ever evolving and so is life. I am not in the same place as I was yesterday as I am today. My comedy kind of follows my journey. Every time you see me you might hear similar stuff, but you are not getting to get it the way it was told before. It just depends where I am emotionally, physically, and mentally. I just like to say I am the truth teller.

ATM: As you farther your career in comedy, what is your mission as a black woman in comedy?

CB: I would love to show that funny is funny. You do not have to be all sex jokes, raunchy, and nasty. You do not have to be completely one-sided, political, male bashing, or talking about feminine hygiene and your period. We as female comics can be everything wrapped into one. We can be attractive, plus size, skinny, light, dark, white, Spanish, or whatever. Funny is funny. It does not have a particular look or sound. I would hope that the same liberties they give men in this business they would give us.

ATM: And these liberties are?

CB: Men have the ability to say whatever in comedy and look however they want. They are reverend as geniuses, innovators, pioneers, and trailblazers. But, they tend to want to smack a woman’s hand if they are too dirty or say she is not good enough if she is not onstage half-naked talking about giving head for 20 minutes. It is weird how they judge us different than how they do the men. Men can go on stage looking any kind of way, saying any kind of thing and they are deemed genius, pioneer, renegade, and trailblazer.

Let a woman go onstage and do half of that, “oh she is a naughty girl, oh we cannot endorse her, she is this and she is that.” It is weird that what they pick in Hollywood to represent females in comedy sometimes is so far from what we really are. You know eventually, they will get it.

ATM: In what you just described, do you think women are still constructed with this not having a voice stereotype?

CB: There are still people that believe women should be seen and not heard. I have dealt with more sexism in this business than I have racism.

ATM: Why do you feel this?

ATM: Do you feel this intimidation hurts their character or self-esteem?

CB: I do not know what it is. Is it a pride thing or ego thing? Is it a they want to put on a dress thing? I do not know. Most of the people talking trash about Tiffany are men. Why? You are not going out for the same roles unless you are putting on a dress. You know what I am saying. Why would you hate on her? That girl has worked her ass off like a lot of us. She deserves her spot. People can have their own opinions but, why couldn’t you have just gotten it through blood, sweat, and tears like anybody else. Why does it have to be “She screwing white men? She is doing this.” Really? Why does it have to be this? Could it be that she just put her work in and it was just her time. This is the one thing that I have seen that has been a consistency whenever a woman is successful. It can never be on her marriage, her talent, and her hard work. It always has been that she made it on her knees and not on her feet.

ATM: Or they bring up the past people she slept with.

CB: Right, which has nothing to do with anything. If we were to run most of these men’s sexual resume, then we will be talking for a few days. It is crazy they can never just accept the fact that a woman can be just as funny if not funnier than a man. Without having to sleep, suck, or anything else to get there. This is the first thing they want to put on a woman when she is successful.

And my thing is this, do not get me wrong, you have some out here honey, that has never seen a top of a dresser because they stay on their knees. But at the same token, those are the far and the in-between. Most of the sisters I know in this game have put in their work and deserve their spots.

ATM: In your gender and position, how does it feel to be a woman in our society today?

CB: It is a wonderful thing. Women now that have gone from not having a voice and are now given a voice. It is still a long way to go. You still have a lot of men and people in power that have a mentality that a woman should just shut up and put up. We are still in a day where we want to be treated as equals but at the same token, we want to be treated as ladies. It is almost like a double sword. How can we be a lady and be treated as equal? I think at this point I see doors cracking open, but none of them have been busted opened yet. If I had to be completely honest. We have cracked it enough for a few people to get in, but not for everybody. Only those and few can reap the benefits of equality.

ATM: Do you feel like we will ever see the full effect of this equality and the doors getting busted open in this generation or the younger kids of today’s generation as we keep pushing forward? Young meaning children who are 4 or 5.

CB: Umm, to be honest, it will not be in the next decade. Not as long as we got “Grab ’em by the coochy in office.” No. You have too many good ole boys for somebody in the highest position in the world. Telling them it is okay for them to be bad little boys and touch on little girls.

ATM: How did you feel when you heard this to know that your gender has been verbally and physically exploited?

CB: About what he said?

CB: I mean he has a triple dose of it. He is white, a male, and he has money. Real talk if anyone got a wake call that this only applies to them, is Bill Cosby. You cannot be 2 out of 3 baby, you have to be the whole tri-sector. You know what I am saying. It sickens me. It is a part of me that fears and worries for my nieces. But I am like as long as I am their aunty they are going to be alright. Because if you are going to grab me by it, then I know how to kick you in it.