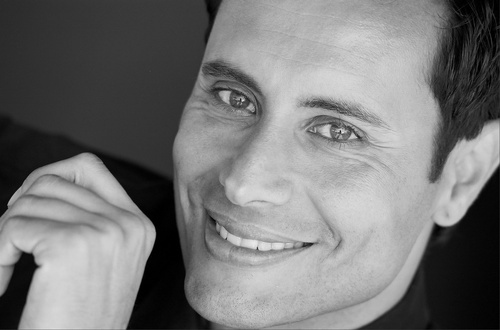 Interviews on October 26, 2018 0Likes At The Movies
ShareTwitterFacebookInstagram

ATM: Explain the beginning preparations of your film American Nightmare.

Jesus: At the end of June, we had this crisis of migrant families being separated at the border because of the Zero-Tolerance Policy. The discretion given to the authorities in the application of the law was eliminated by this policy, so families being detained together could not be released until they could go to court to attend their court proceedings. This usually takes a few months to happen. Most of these families had entered illegally (which is a misdemeanor, not a felony) but were seeking asylum because they were fleeing from life-threatening violence in their homelands.

Then a National Poll revealed that the majority of Republicans supported this Zero-Tolerance Policy that caused 2654 migrant kids to be separated from their asylum-seeking parents and that surprised me. I personally looked at the Republican Party as a party that stood for family values and traditional American values. Many of their supporters are Christian as well, so how could they support such dehumanizing policy? That inspired to write down this story that would allow us to put ourselves in other people’s shoes. This is not a political film but rather a humanitarian film that inspires us to awaken of our empathy for one another regardless of country of origin, race or immigration status)

American Nightmare has now become an important film because illegal immigration continues to be an important topic causing tremendous division in our country.

ATM: How deeply did you want the mother and daughter portrayed to be in your film American Nightmare?

Jesus: The mother is a Trump Supporter, but I wanted her to be portrayed as a likeable good Christian mom to her 5 year-old daughter. I believe Jo and Kiana did a great job portraying their characters in that way. The film does not make anybody wrong, but it does make two points: On one hand, it reflects upon the dehumanizing application of the Zero-Tolerance policy against migrant families. On the other hand, it addresses the unfair criminalization of undocumented immigrants to the extent that they are called “illegals”. Most of the people who have crossed the border have never committed any felony or serious crime. They have only committed a misdemeanor with their illegal entry. This does not mean in any way that they are criminals.

It was important for me to make a film that is socially relevant and can bring awareness about the devastating effects our current policies and attitudes have had in the immigrant community. I hope the film can help awaken our empathy by appealing to our heart and consciousness. At this time, it seems to me we have to protect our American values before we can effectively protect our American borders. This film serves me as platform to engage people in a conversation about this topic.

ATM: What has been your most inspiring feedback for this film?

Jesus: I have received feedback from the whole spectrum. This is a film that has made people cry and look at this issue from a different perspective. These are the people who are waking up to the fact that perhaps we are talking about immigrants or approaching these issues with a lack of compassion and a lack of empathy for those who are suffering. I have also had a lot of Trump Supporters who were triggered by this film and have responded with a lot of anger, even with insults. That was not my intent but I welcome their opinions as well and I do my best to understand their perspective and respond with love. I’m inspired by Spiritual masters like Jesus, Muhammad, Buddha, Krishna etc. who used their storytelling to convey the wisdom of loving others as we love ourselves so that we can ultimately realize our Oneness. That is my ultimate aspiration as a filmmaker, as a public speaker and as a human being.

ATM: After this film, what are your next steps to provide good and common sense about the solutions regarding the immigration crisis?

Jesus: There are many solutions. The first step is to look at them as human beings not as criminals. From the narrow legal frame, it is very easy for everybody to feel they are breaking the law. And for politicians to say: “I am going to be tougher on crime and deport them” But this is not only inhumane but also unrealistic. It’s a ploy that sound good to gain votes and get elected. This is not how you solve the problem. To solve the problem, you need to focus on the root cause. When you concentrate on the root cause, then you can find clear solutions. I am going to give you a few:

Imagine that instead of deporting undocumented immigrants, that we allow the people who are here, who pay taxes, and have not committed any felony to legalize their situation. Now, when they send money back home, like through Western Union for example, to support their families back home, we have a foreign policy agreement with, let’s say, Mexico, or other Central American governments to tax some of that money they are sending out to be utilized to support the small local entrepreneurs that are creating jobs back in their homeland. Not only are we not deporting them and breaking families apart, but we are also using them to solve a problem back home with their own money. This makes more sense than building walls and for-profit detention centers that are costing tax payers billions of dollars and are not effectively deterring desperate migrants that have nothing to lose. A good example is a caravan that is now approaching our country.

We have to think creatively and start engaging in smart foreign policy instead of focusing on failed and dehumanizing domestic policies. We need to look at this as a humanitarian crisis and work with our neighboring countries South of the border as a way to find good common-sense solutions that would allow those people to stay in our homeland. As an example, reducing their international debt would help these countries to develop their economy. They now are paying a high interest rate on their international debt, so their tax dollars are being allocated to pay back that debt. We could make a deal with them to eliminate high the interest on their debt as long as that money being saved could be allocated to develop their local economy with the support of the United Nations.

How about we make a deal? That we say listen, let’s eliminate your interest on your debt as long as this money you have been sending is going to be allocated into the economy, so you will not have so many people coming here. Also, support the United Nations, which America is not doing.

Another way is, as by implementing fair trade agreements so they can maintain their food sovereignty. Let the local farmers provide food for their own people and avoid the mistake that we did with NAFTA (North American Free Trade Agreement) that enriched the heavily subsidized American agricultural conglomerates at the expense of small Mexican farmers. It is calculated that 2 million of them lost their livelihood and were forced to come to our country.

This is indeed a complicated issue, but only when we look at the root cause of the problem we will be able to find good common-sense solutions that will be good for America and immigrants alike.

Everybody is welcome to go to www.americannightmarefilm.com to see this short humanitarian film and discover many MYTHS and FACTS about unauthorized immigrants and refugees to help us solve this crisis without further division and polarization