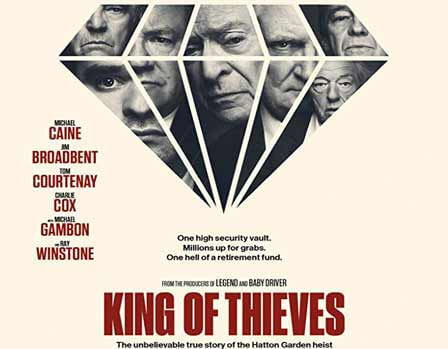 News on October 29, 2018 0Likes At The Movies
ShareTwitterFacebookInstagram

Directed by James Marsh (The Theory of Everything) and produced by Working Title Films’ Tim Bevan and Eric Fellner, King Of Thieves tells the story of the April 2015 burglary of the Hatton Garden Safe Deposit Company. The robbers stole over £14 million worth of loot. To this day, it is known as the biggest heist in U.K. history. Joe Penhall, the writer of the screenplay, based the film’s source material from Mark Seal’s Vanity Fair article and The Guardian’s veteran crime reporter Duncan Campbell.

“King of Thieves is led by a stellar British ensemble cast,” said the president of Saban Films, Bill Bromiley. “The pedigree of Michael, Jim, Tom, as well as Working Title make a very attractive package. We absolutely love this film!”

Saban plans on releasing the film in the first quarter of 2019.