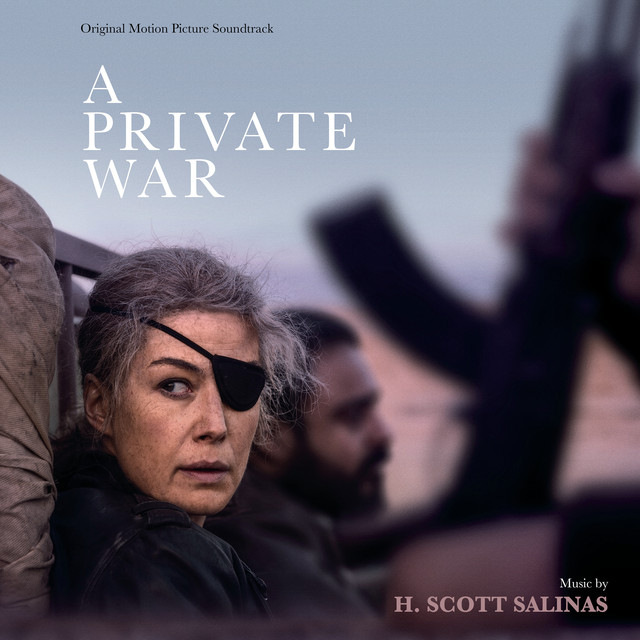 Spotlight on December 24, 2018 0Likes At The Movies
ShareTwitterFacebookInstagram

H. Scott Salinas was the composer on the film Private War that  recently received two Golden Globe nominations. Salinas talks with ATM about the preparation that went into making the music.

ATM: Why did you think your composing could shape the themes in this film?

H: You never know if your composing style is going to work. It is always a gamble. I had worked with the director on his other documentaries, so I had this going for me. We had a good dialogue relationship. I knew the material, meaning the actual movie moved me emotionally. I knew we were in a good starting point and the material had resonated with me. We just started experimenting and started to work with each other again. The truth is that you do not now until you get into there and mess around to see what happens.

ATM: How do you work when all the odds are against you?

H: Interesting. You have to come straight from the heart. You have to go straight from what feels authentic. You have to bypass your brain, mind, and voices in your head saying, “What if they do not like this?” That inner critic. You have to silent this person and have an emotional response to the material. You have to trust how you translate this into music. You have to have a lot of faith in your instinct. This is the only way to succeed. If you start thinking all the odds are against you, then you will be in big trouble. It is a very hard thing to do in trying to get in the mind of a director and make their project come to life through music. It is a big change every time to out figure what they want and what makes it the best movie possible.

ATM: So, your internal self becomes a competitor with your external self?

H: You can use this to your advantage. When you are composing or creating something, there is this first step when you get into this child like innocent place where you are not judging anything that is coming out. My job is not to make whatever I want, but it is to make what works for the director and film. I have to collaborate and put on a different hat when doing this and say this felt good. I enjoyed this but is this the right thing for the movie. You must answer this question as a critic or as an internal self. Sometimes ideas might be inspiring, but this does not feel like this movie. Maybe this is about a break up I had, or my dog died. This is nothing to do with this movie. I channeled something, but not this. Part of it is innocence, and immediately of it is judging. Will you get into trouble if you are judging in the first step? This is when you get writer’s block, and you will be able to create anything.

ATM: Describe a day of having writer’s block.

H: I always have writer’s block. The beginning of every project can be scary. It does not matter if its new people or people you have worked with before. If it is new people, then you want to show them they made the right choice. If it is people you worked with before, then you do not want to disappoint them. They already have expectations from before. “Oh, he did a good enough job last time. He will do it again.” This does not exactly help you. The truth is that it is always there. I have learned as an artist that the fear of failure is just the other side of passion. Passion, authenticity, emotion is just the other side of the coin of fear. If you are not feeling any fear or any apprehension, then it may be a bad sign. It might mean you do not care. “Oh, I may wake up today to play some music.” If you are in this mentality, then it may not yield the best results either because you do not have any sort of investment. The fear is good. You just have to be used to it. It is like an extreme sports person. Not that I do anything like this. People who are like on a snowboard and jump off a mountain, there are terrified right before they go off the mountain. They know how to channel this into a back flip or whatever. They know to take that fear and harness it to make it do something amazing. They are really scared.

ATM: How did you want your composing to depict the lead character’s issues and struggles?

H: PTSD is one of the main character’s issues, and she had an addiction to going back into the war zone. Another aspect of her is that she is a hero in telling the truth and a journalist. She wants to show the world what is going on in these places. There are two different sides of her that are fighting each other. This is what I tried to portray in the music. For the PTSD addiction side, I was thinking of being underwater and being pulled by the undertone like when the waves are thick. You are getting pulled under, and you come up with the waves crashing down on you — the circular feeling of being pulled and smashed. This is what I always had for her addiction. In your more altruistic side such as being a journalist, it was more about positive and progress. I would match these two things and play with them musically. These were my two inspirations.

ATM: What family of instruments do you feel would make the audience connect with the alcoholism scenes?

H: There is one scene where you see it all come together. There is this montage, and she is freaking out. I tried to create an inevitable feeling of pulling almost like a convey belt like when you are on a treadmill. No matter what you do this the direction you are going in. You can fight it, but if you fight it, you are not going anywhere. You are just staying in the same place. For me musically, it took regular instruments like trumpets. I slowed them down to make them sound like they were coming from another world cold underwater.

ATM: What are things you could have done uniquely in the score?

H: Sometimes there are moments when the director and the composer do not agree. There were a couple of scenes where I wanted to do things more beautiful, and he wanted to do something darker and grittier. He is the director, and it is his movie. The movie is doing well. I trust his choices. It would have been interesting to see if the music in a few had played against what was there as supposed to going with it. I wonder how folks would have reacted: would it had made no difference or would they have appreciated it. It is a pretty subtle thing.

ATM: Do you kind of watch it with your idea or the director’s idea, the one they actual selected?

H: The director one. My job is interesting. It is not that different than being an interior decorator. This is not my movie. This is not my home. I am coming to your home with some ideas. I am asking what you like and what works for you. We can come up with something cool that I am proud of. At the end of the day, this is your home. If you want red on the walls and I thought it should be yellow in that one spot, then it is alright. Some people cannot handle this part of the job, and they burn out with being a film composer. They cannot handle letting go. It does not mean they are a bad person. It just means they are not the right person for this profession. They should just make their music. Once you have collaboration, you have to be comfortable with losing certain battles and trust in the people’s vision you are working with. We banged heads on a couple of things, but it was pretty smooth. If you do not have any friction at all, then this is not a good sign. You do want to have some banging heads and back and forth. So, people are not just being quiet and not saying what they thing. It is a healthy thing.