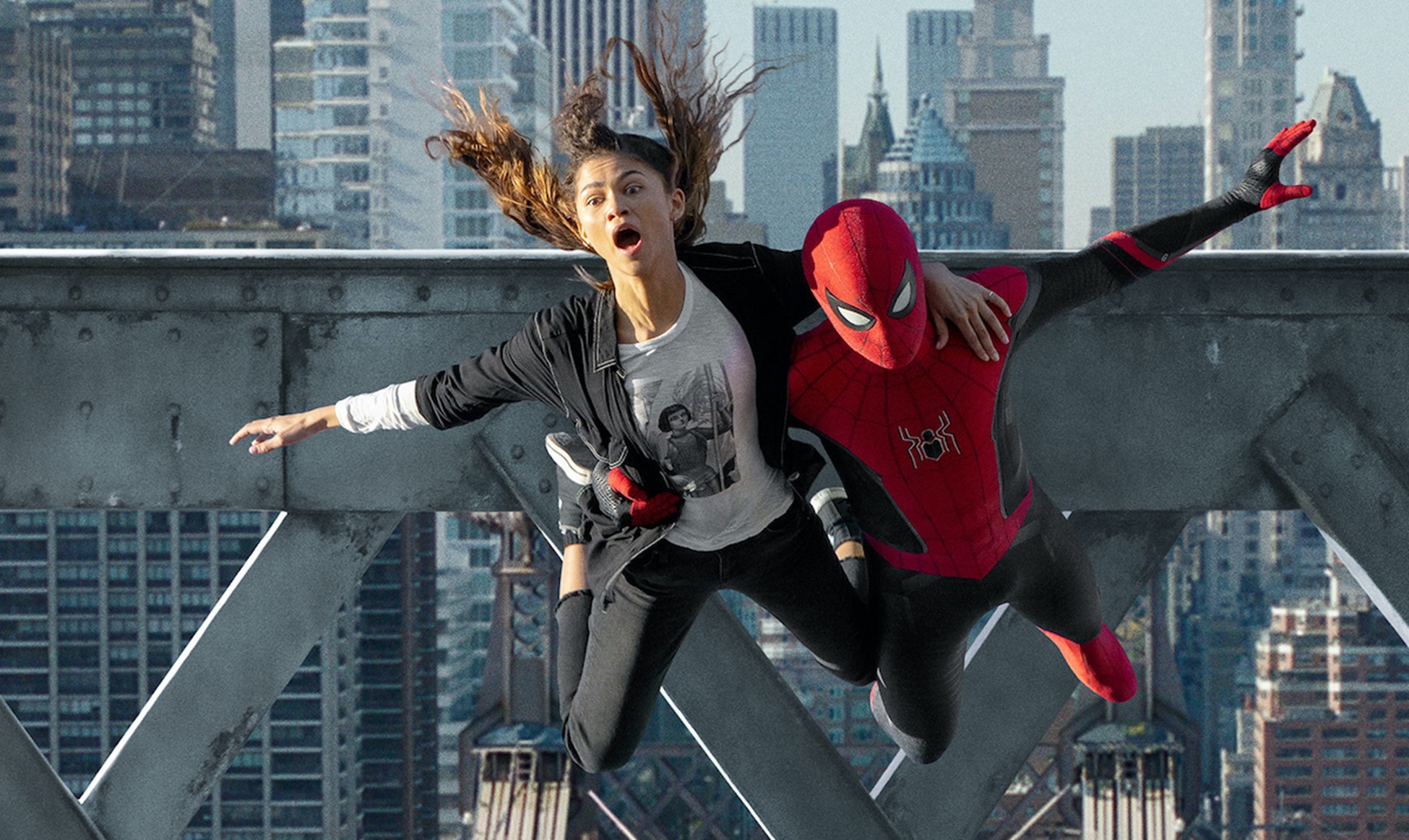 Some of us might already be exhausted from talking about Spider-Man. However, with the memes running rampage on social media and the box office still trotting along nicely heading into its eighth weekend, there’s no way of webbing it up until it hits VOD come the beginning of March. Spider-Man: No Way Home has conquered all ever since its release before Christmas. COVID or not, it has proven that audiences are still excited for what comes their way and that there is no chance of replicating an experience for these once-in-a-lifetime blockbusters. It made Sony and Disney proud, reveled in some incredible records, and promises more to come for the web-slinger’s future. (Warning: Spoilers ahead.)

No matter what we say, the Marvel Cinematic Universe will be leading the box office to 2030 (at least). And it’s evident that in the past two decades, the superhero genre has taken off to astronomical heights. The superhero formula satisfies many consumers, where they witness onscreen heroes from the comics wage war against their greatest villains. Notable actors such as Robert Downey Jr., Chris Evans, and Chris Hemsworth have seen their stocks rise to the top names worldwide.

Tom Holland’s third Spidey film does everything it needs regarding fan service and then some. It comprehends the entire arc behind what and who Spider-Man is. It gives him an entirely new direction in the MCU after being the young teenager that once idolized becoming a part of the Avengers, earning that title, and then losing it all. And what better way to do it in a trilogy capper that respects the past but also the future?

It has earned 88% more at the domestic box office than its predecessor, Far From Home, which is a much higher jump for a threequel than Skyfall, Captain America: Civil War, and John Wick: Chapter 3. It can probably slide to 90-92%, the fourth-best for any threequel jump (behind Army of Darkness, Goldfinger, and Once Upon a Time in Mexico). Oh, and its opening weekend is the second-biggest ever domestically (behind Endgame).

With its box office momentum slowing down with the upcoming VOD dates, it may slither close to $1.8 billion worldwide (with a $760-780 million domestic), which is still a win for Sony (even without a penny from China). Again, they’re releasing Uncharted later this month and Morbius in April now, so Sony can maintain its winning streak until Disney (or Universal) takes over again in the summertime.

The only massive record left for it to (potentially) break is Avatar’s 3rd place standing in domestic sales, which is $760.5 million. With competition growing harsh starting this month, beginning with Jackass Forever and Moonfall, it’ll be intriguing to see how much it legs out in its theatrical run. But it wouldn’t be surprising for it to ultimately capture bronze as No Way Home has been legging out similarly to when Star Wars: The Force Awakens did at the beginning of 2016 to a record $936.7 million domestic.

#2 No Way Home is no Avengers: Infinity War/Endgame, but it stands as a beautiful treat of nostalgia for Spider-Man’s onscreen history.

The last two Avengers mega films were the build-up of 10+ years of storytelling that allowed them to flourish when it came to debuting. Both amassed over $2 billion, and they rewarded many with a “holy crap” cliffhanger and a touching ending to a mighty franchise that initially started with Iron Man. On the other hand, Spider-Man was rebooted a second time in the setting of the MCU back in 2016 and got some great outings with his solo stories. Tom Holland brought a wonderful dynamic to the role, juggling the teenager life of Peter Parker and the ambitious lifestyle of the webhead counterpart.

Once the post-credits of Far From Home did the unthinkable for Holland’s character, No Way Home became a must-see thanks to that spark of “everyone in the world knows who Spider-Man is now.” It had never been attempted before in cinema, so every comic book fan and their parents were noticed. That extra kick, plus the marketing that revealed some extraordinary nostalgic moments (such as William Dafoe, Alfred Molina, and Jamie Foxx reprising their roles as former villains from previous Spidey franchises), and (SPOILERS) not-so-secret involvement of Tobey Maguire and Andrew Garfield ensured a grand opening weekend.

Tom Holland can claim it’s a supposed “twenty-year celebration” all he wants, but there was a point when connections between Sony and Disney ended, and this almost didn’t happen. Sony could never access Doctor Strange and his botched multiverse spell to make the returns justifiable without Disney. So, No Way Home luckily became a stopping point of Spider-Man nostalgia and insight into Tom Holland’s future of the web-slinger. His third solo outing gave us everything we could’ve dreamed of and provided returns that made the product much more scintillating.

So, yeah, not only did the beloved (well, most of them) villains from Raimi’s and Webb’s series return, Maguire and Garfield showed up at the end of the second act. Call it terrible marketing or not (which most definitely is the former), their returns to the screen as their iterations of Spider-Man was a dream come true for many fans. From Maguire’s droll deadpan to Garfield’s overeager, charismatic fun guy, the film had elements beyond “Gasp. They’re here!”

It was fascinating to see the fallout after their franchises ended. Maguire’s Parker matured and finally worked things out with his MJ (played by Kirsten Dunst), and Garfield’s Parker was still reeling after he failed to save his girlfriend, Gwen Stacy (Emma Stone). Their intertwining of tragic stories, plus Holland’s loss in No Way Home, gave the feature immense pathos. Yeah, mess with this stringy multiverse all you want, Sony and Disney, but their time together reaffirms the status of what it means to be a hero (aka “with great power, there must also be great responsibility”). Maguire stopped Holland’s Peter from joining the dark side as he once did, and Garfield earned his actual moment of atonement by saving MJ. On top of that, they got to spawn infinite memes, which is always a plus in today’s everlasting pop culture.

Another excellent aspect was letting William Dafoe brilliantly re-embrace his Dr. Jekyll/Mr. Hyde performance as the Green Goblin, Alfred Molina shining once again as Doctor Octopus, and allowing Jamie Foxx to bring swagger to his role as Electro. Thomas Haden Church and Rhys Ifans returning to voice their characters were likable, even though they stuck as background characters this time. And J.K. Simmons playing J. Jonah Jameson, reminded us how spectacular Raimi cast him back in 2002.

Fans were denied a fourth outing with Raimi and Maguire and a third with Webb and Garfield. Spider-Man 3 Version 2 gave insight to both and redeemed the tragic endings of those franchises. Perhaps if fans can push at Sony’s buttons the way folks did for Zack Snyder’s cut of Justice League, they may get their wish.

#4 Ultimately, Sony reinstated the glory of their Spider-Man collection at Marvel Studios/Disney’s cost.

Now hang on a second, Sony and Disney mended their differences and will work on a fourth film together. So, how exactly does that statement above stand?

Had both companies stayed divorced for a sequel to Far From Home, Tom Holland’s Spider-Man would still be outed as a fugitive by Jake Gyllenhaal’s Mysterio and no MCU pals at his aid (since none of them knew him aside from Tony Stark). Sony could’ve put their spin on the third outing, and it probably would’ve still broken a billion dollars worldwide if they put on a good product. But, since they reconciled, Sony used the continuing MCU narrative to ensure the money stream while furthering its agendas (aka Sony’s Spider-Man Universe).

As mentioned earlier, No Way Home gave Maguire and Garfield redemption, plus a post-credit scene with Tom Hardy’s Venom (who has brought in nearly $1.4 billion with his two solo stories). That means any previous Spider-Man tale before Tom Holland’s latest becomes a “must watch” due to a new perspective and a rejuvenated interest. Yeah, most of us can agree that Spider-Man 3, The Amazing Spider-Man 2, and both Venom films are subpar, but No Way Home did the impossible and made them unintended gems. Now, since Tom Holland’s Peter Parker is a lone wolf with (almost) no MCU connections, Sony can pull out anytime and make a box-office bank off Spider-Man and Co.

In 2021, Disney did not come close to battling Sony either. Black Widow, Shang-Chi, and Eternals did not make over $500 million worldwide, whereas Sony’s products did. Disney will enter 2022 on the offensive to reclaim their throne with Doctor Strange 2, Thor 4, and Black Panther 2 against Sony’s Morbius. Those sequels will easily steamroll one film, but they had a massive disadvantage after multiple postponements over COVID and their Phase 4 film release dates tossed around after events transpired (such as James Gunn’s firing in 2018 and Chadwick Boseman’s unfortunate death in 2020). DC is playing hardball this year with The Batman, Black Adam, The Flash, Batgirl, and Aquaman 2. So much for Disney standing as the king of the world back in 2019.

Spider-Man and Sony will coast until Doctor Strange returns to the big screen for some chaotic multiverse madness in the early summer season.

The DC Extended Universe Is Getting Another Major Reset, For Better or Worse