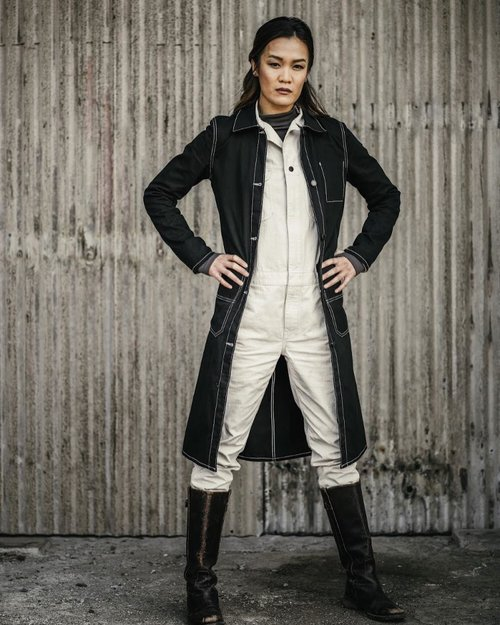 Interviews on December 27, 2018 0Likes At The Movies
ShareTwitterFacebookInstagram

Sydney Viengluang plays Dr. Sun Mei in Syfy’s Z Nation. She was introduced in the third season as the head of the Pan Asian American army. Viengluang talks with ATM about her role, series themes and breaking barriers.

ATM: Why are science fiction and action your favorite genres?

SV: You do not have to live on earth with science fiction. Growing up I always loved the shows that used more of the imagination than the real world. These are shows like Star-Trek and others. For some reason, on other Syfy networks shows there tends to be diverse casting. We have an African American woman lead on Z Nation played by Kellita Smith. There is so much diversity in the science fiction world as far as casting. This is because “aliens” can be different colors. They all do not have to be like white America. I like science fiction, the use of imagination, going out to the different worlds, and galaxies. Futurist topics to me have always been interesting to me. I have always loved action. I grew up as a tomboy. I always liked to do physical things and things like riding my bike. The stars in the action movies would always kick bad guys’ butts. These were the T.V. shows and movies that I was always drawn to.

ATM: Wouldn’t the stereotype or what we consider as a “tomboy” today get seen as being inclusive?

SV: Nowadays people want to see kick-ass and bad ass women especially for people of color. I just watched the trailer for the new Men in Black movie starring Tessa Thompson. She is playing one of the agents. I was like “Go, Tessa!” This generation is much more open to seeing strong, capable women that do not need to be saved by a man — also, the man being their knight and shining armor. This genre now you see as one of my favorites Jessica Jones. Back in the 90s, it was Jennifer Garner in Alias. These are the types of shows that I grew up watching and still watching. This generation is more open-minded and inclusive in wanting to see strong female characters because this is who we are and that is who they are. It is more inclusive and reflective in this day and age.

ATM: How can futuristic things like yourself further one’s imagination regarding thinking outside of the scope of what is presented to us humans?

SV: People who think outside the box are people who probably had a wild imagination as a child. They are creating these worlds because sometimes people have the talent. Some people have the talent of saying “I am going to make this alien world. I am going to do make Star Wars.” These are things that were never imagined before, and this is a great talent to have. The writers and creators who can create this world have an extraordinary imagination that normal people probably have but do not tap into. This is because they already have the “think outside of the box” mind frame — this where they can go outside of the box in passing.

ATM: What has been your furthest thought that would be considered outside of the box?

ATM: How does the show Z Nation add to the American Science Fiction television series?

SV: It is one of a kind of a show. I always go to diverse casting. Karl Schaefer who is the creator and show-runner could have made Kellita’s character a white woman. She is the lead of the show. He could have cast everyone white. This is the POV of the show. This is the landscape of T.V. and science fiction. It has everything for everyone it is not just different races, but it has different age ranges. We have comedy, drama, humor, and other things. This is why we resonate with families. It is a zombie apocalypse and horror. This is why you see families who are fans say, “they get together every Friday night to watch it.”

SV: They will probably look back and laugh at us just like we did of what Hollywood was 50 years ago. When you read about Hollywood 50 years ago, and it was rare to see anybody of color. If it was, then it was very stereotypical. We would get white washed were a white person would play an Asian person. This was ridiculous. The sons and daughters of this next generation will look back and say “Are you serious? You guys were having trouble finding Asian American actors. There were biases. It was hard for Asian Americans to find third-dimensional roles.”