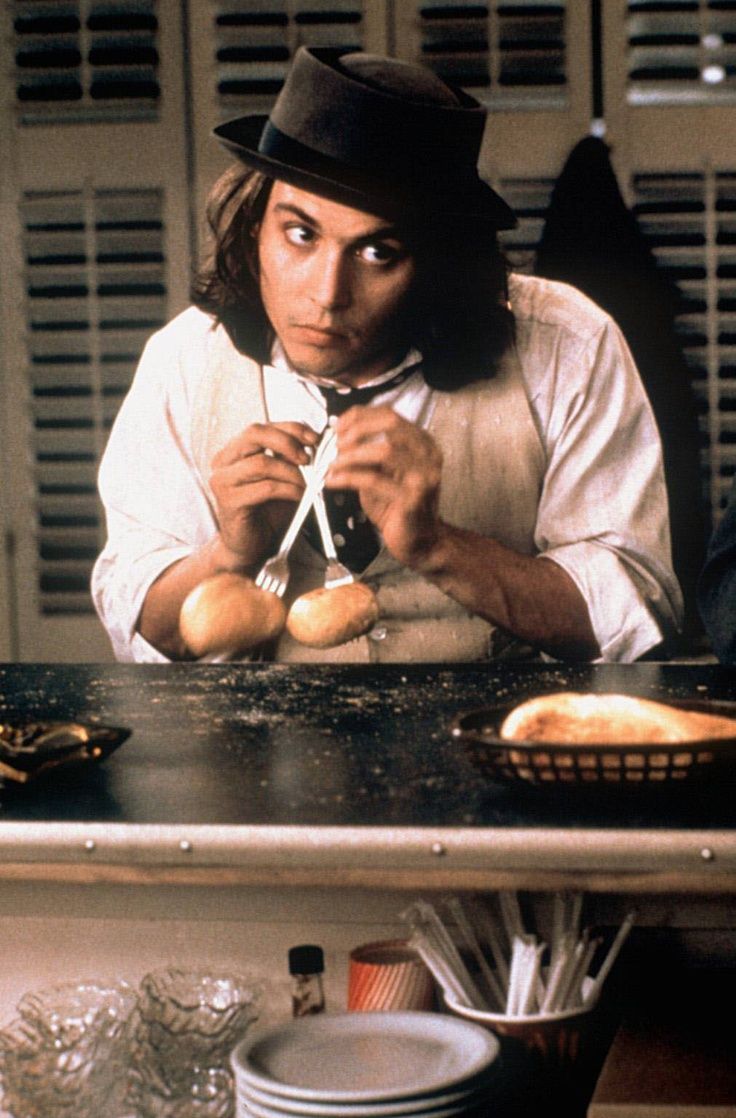 Spotlight on October 3, 2019 0Likes At The Movies
ShareTwitterFacebookInstagram

Critics have called Johnny Depp one of the most prolific and greatest character actors to date. Yet, most people have not seen much of Johnny Depp’s best work.  Yes, he shines brightly in the Disney blockbuster Pirates franchise; but Depp shines brightest in the movies most people have never heard of or seen.  Picking this list was difficult because there are so many great movies to choose from.  It wasn’t a matter of what to put in but what to leave out.  To include every “must see” film in his career would be almost impossible.  Depp’s fans will surely have some disagreements with this list; but the list is more for those who are only familiar with the blockbuster films.

Renowned film maker Olive Stone wrote and directed this movie about the Vietnam War. Platoon had an all-star cast including Depp, Charlie Sheen, Willem Dafoe and Forest Whitaker.  This 1986 film won four Academy Awards. Why this film makes the list:  Stone had much of Depp’s scenes cut out of the movie because his acting outshone that of his co-stars. Stone wrote the script in 1971 and sent it to Door’s lead singer Jim Morrison in hopes he would star in the film. Morrison had the script in his possession when he died. Best line in movie: “I think now, looking back, we did not fight the enemy; we fought ourselves. And the enemy was in us.”

Depp plays a terminally ill college professor named Richard who decides to spend his last days enjoying life without inhibitions. This quirky film, written and directed by Wayne Roberts has a good balance of comedy and tragedy. The Professor teaches us lessons without being overtly religious. Why this movie makes the list, Depp proves he does not need a high budget film to shine. Best line in movie: “In each and every moment we’re composing stories of our lives, let’s aim to make it a meaningful read… or at least an interesting one.” Trivia: There are three references to a work by John Donne regarding death; “for whom the bell tolls, it tolls for thee.” When Richard is first diagnosed, he hears the campus bells toll. Richard has a copy of Ernest Hemingway’s “For Whom the Bell Tolls” in his office.

Secret Window is based on the novel written by Stephen King.  Mystery writer Mort Rainey (Depp) is going through a bad breakup with his wife. He moves to his cabin by the lake to get a hold on his life. A mysterious man shows up accusing Rainy of plagiarism.  Soon, long hidden secrets become revealed. Why this movie makes the list: Depp can portray a loveable goof ball and a crazed killer in the same scene.  Best line from movie: “You know, the only thing that matters is the ending. It’s the most important part of the story, the ending.”. Trivia: In one scene Mort lays his hat down on a book written by his friend Hunter S. Thompson

Johnny Depp portrays Inspector Frederick Abberline, the chief investigator of the Jack the Ripper murders. Though based on real events and real people, the movie itself is a work of fiction. Abberline is a clairvoyant who sees the murders before they happen.  The murders become personal when Abberline falls for an unfortunate (Victorian term for “prostitute”) who is in line to be Ripper’s next victim. This stylish horror film addresses the issues plaguing Victorian England; poverty, unforgiving morality and the mistreatment of the poor and mentally ill. Why this movie makes the list, Depp again proves his range of emotions and characters in a horror setting. Best line in movie: “What’s wrong? You think I was born a whore? Oh that’s right, England doesn’t have whores, just a great mass of very unlucky women.” Trivia: Sean Connery, Daniel Day-Lewis, Brad Pitt and Jude Law were all considered for the part of Inspector Abberline.

A single woman moves into a small quiet village in France.  She opens a chocolate store and brews trouble among the village habitats. Is she a witch, an angel sent from God, or a temptress determined to ruin the morality of the village? We never find out for sure. One thing we do know is that there is magic in the chocolate she makes. Slowly, the villagers let go of their inhibitions and everything from love to chaos develops. Depp’s is a minor character in the movie, but his part is the turning point in the film. Why this movie makes the list, Depp can take a minor role and make it the most memorable part of a movie.  Best line in movie: “I think… we’ve got to measure goodness by what we *embrace*, what we create… and who we include.”  Trivia:  Le Chocolat is the second film Lena Olin and Johnny Depp filmed together. The first is Ninth Gate.

Joon (Mary Stuart Masterson) has a mental illness and she lives with her brother Benny (Aidan Quinn). Benny is overprotective and has his life on hold due to taking care of Joon.  On her part, Joon is given to extreme outbursts of anger and sets things on fire.  All this change when Sam (Johnny Depp) comes into their lives.  Sam is mentally challenged and models himself after Buster Keaton.   Why this movie makes the list, Depp does all the stunts in the comedy sequence in the park; thus, proving that he can do slapstick comedy.  Best line in movie: “They used to be fat and juicy and now they’re twisted. They had their lives stolen. Well, they taste sweet, but really, they’re just humiliated grapes. I can’t say I am a big supporter of the raisin council.” Trivia: In the original script, Joon burns down Benny’s house.

Blow is a true story about George Jung, a cocaine dealer, who smuggled for Pablo Escobar. We see Jung’s life through his eyes and are given an understanding of how someone like Jung could get mixed up with someone like Escobar.  It all started at childhood with a mother who coveted the finer things money can buy and betrays her son when he needs her most.  The lesson in Blow is that money isn’t real, and the only thing of worth is love.  Why this movie makes the list:, it takes a substantial amount of empathy and understanding of human nature to portray a real person and Blow proves Depp has it. Best line in movie: “Sometimes you’re flush and sometimes you’re bust, and when you’re up, it’s never as good as it seems, and when you’re down, you never think you’ll be up again, but life goes on.” Trivia: In the final arrest scene a member of the crew wearing a gold watch is seen behind the plastic.

Depp portrays John Wilmot, 2nd Earl of Rochester, a poet and libertine in the court of King Charles II.  Wilmot was an intellectual who believed in reason, and as such, was an atheist and free spirit.  His love for drinking and sexual pleasure put him in an early grave; but not before making him an outcast in 17th century England.  Dying of syphilis, Wilmot accepts Christianity and attempts to make right his most grievous wrongs.  Why this movie makes the list, The Libertine proves that Depp is a Shakespeare worthy actor of the highest caliber.  Best line in movie: “If God wants men to have faith, why does he not make us more disposed to believe?” Trivia: The Libertine was shot in only 45 days.

Tim Burton directed an all-star cast in this movie about real life director Ed Wood. Best known for his film Plan 9 from Outer Space, Wood produced a series of low budget science fiction flops in the 1950’s.  Produced in 1994, Ed Wood has a feel like Burton’s other cult classic, Mars Attacks.  It is said that Depp had grown tired of acting and that Ed Wood allowed him to have fun and rejuvenated his love for film making.  Why this movie makes the list, we get the first glimpse of the tongue in cheek style that would one day make Captain Jack Sparrow a world famous and much-loved pirate.  Also co-starring in the film is Bill Murray, Sarah Jessica Parker and Patricia Arquette.  Best line in movie: “We are going to finish this picture just the way I want it…because you cannot compromise an artist’s vision.” Trivia: This film cost more to make than all of director Ed Wood’s films put together.

Brave is the most important film in Johnny Depp’s career because it shows his multiple talents.  Depp wrote, directed and starred in this drama about a poverty stricken Native American who has been in trouble with the law more times than not. His family lives in a rundown camper that is literally at the base of a trash dump. Unable to find a job and with the land fill owner coming in to destroy his village, Raphael (Depp) makes the ultimate sacrifice for his family; a sacrifice that will provide them with just enough cash to get out and make a clean start. Why this movie makes the list, as writer and director Depp give us a rare view into his heart, mind and soul, he does not falter on showing his vision of poverty and what it does to humanity. Depp directs Marlon Brando through a career highlight performance with his speech about the tragic beauty and spirituality of death.  Here is hoping that Depp one day writes and directs another movie, it will be a tragedy if he does not. Best line in movie: “The final measure of bravery is to stand up to death.” Trivia: Brave did well at the 1997 Cannes film festival where it was nominated for two awards; but American Film Critics hated it and as a result Depp has never released the film in US theaters.