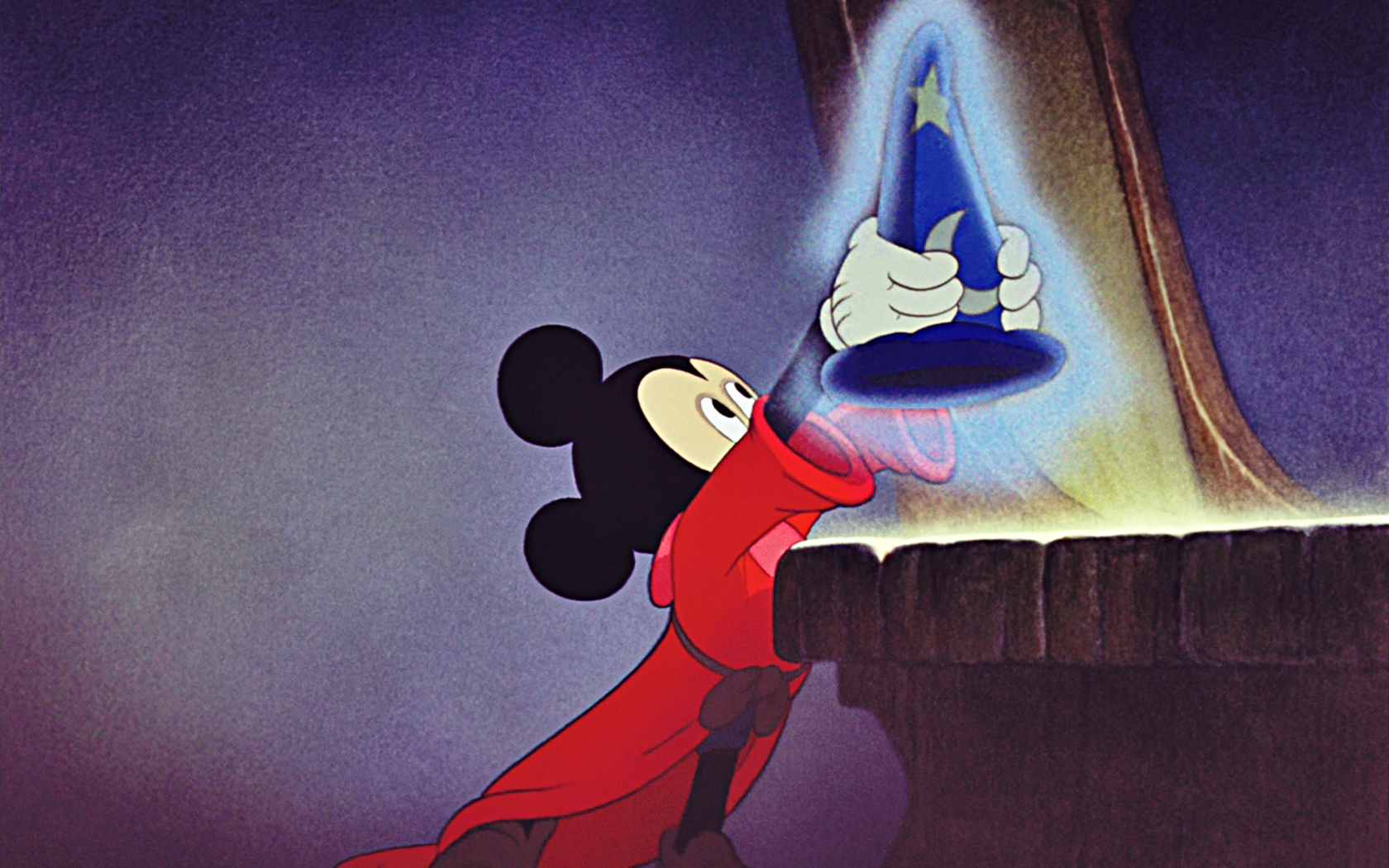 Spotlight on June 16, 2020 0Likes At The Movies
ShareTwitterFacebookInstagram

Today marks the twentieth anniversary of “Fantasia 2000”, the sequel to the oft-celebrated “Fantasia”, which is approaching its own milestone anniversary of eighty years. Normally, anniversaries are causes for celebration, to look back with affectionate nostalgia and offer up a glowing retrospective appraisal. Unfortunately, my retrospect will have a more critical lens, focusing on how “Fantasia 2000” is nowhere near its progenitor’s equal. Eschewing the original’s complex themes in favor of light-hearted child fare and simplistic renderings of good and evil, the film is comparatively soulless and forgettable.

Even so, there are some good sequences to be found in “2000” that mix adult ruminations with kid-friendly slapstick—a combination that the original mastered so perfectly. The best vignette is the one for Rhapsody in Blue. Visually stunning as a stylistic homage to Al Hirschfeld and a surprisingly honest and realistic portrait of Depression-era New York City, the short animation manages to capture both the essence of Gershwin’s music and the city itself. And, with its storylines of malaise and discontent in people at both extremes of the income scale alongside zany instances of fast-paced slapstick, it appeals to both adults and children.

If only the rest of the film were as good. Perhaps the most egregious flaw in “Fantasia 2000” is the horrific computer-generated animation of the whales in the Pines of Rome sequence. In contradistinction to the lively, vibrant, inviting quality of the hand-drawn animation (in the original and even in parts of “2000” like the aforementioned Rhapsody in Blue section), the low-quality computer rendered imagery feels dead, plastic, artificial—it has the remarkable effect of draining a legendary piece of music of all its beauty and power. Fortunately, the other instances of CGI are not quite as off-putting (the toys in Shostakovich’s Piano Concerto 2 vignette actually look pretty good), yet they still do not hold a candle to the palpable textures and attention-to-detail artistry that characterizes the animation of the original “Fantasia.”

The other fatal flaw of “2000” is its overwhelming simplicity and light-heartedness. Of course, children have to be able to follow and enjoy the pieces, but that did not preclude the original from delving into complex territory. In the 1940 original, just consider what these three back-to-back pieces have to offer. In the sequence for The Nutcracker Suite, the mundane occurrence of changing seasons is turned into a magical affair, complete with fairies signaling the start and end of each season while plants, mushrooms, and flowers come alive in exquisitely animated ballet sequences. It rekindles a sense of wonder that is timeless across generations, injecting an otherworldliness into the natural occurrences that we tend to ignore and forget as time goes on. After that, joyous fun comes in leaps and bounds as Mickey Mouse stars in the tale of The Sorcerer’s Apprentice, a little fable that reminds us to not let our ambition overleap itself. Playful, awe-inspiring, and surprisingly thrilling (much like the piece itself), this has become one of the most endearing and famous of Disney’s creations for good reason. After it ends and Mickey runs out of his animation to greet the conductor, the screen fades to black as the soft, opening notes of Stravinsky’s Rite of Spring begin to play. What follows is a brief history of the Earth, starting with its violent creation up to its cold indifference towards the passage of time as the mass extinction of the dinosaurs is shown in startling realism. A thought-provoking examination on mortality, it invites us to examine our own role in an ancient and unfeeling environment. Although these sequences make up only a tiny sliver of the total experience that “Fantasia” has to offer, they microcosmically encapsulate the scope of the film as a whole.  At times instilling in everyone the childlike sensation of finding the magic in the mundane and at other times ruminating on the perpetual coexistence of chaos and order, the ambition and imagination on display is sure to engage both children and adults alike.

In contrast, “Fantasia 2000” attempts to cater to kids by being juvenile. A lot of the pieces lean heavily towards humor stemming from clumsiness and other slapstick devices, while not including enough substantive content. “2000” even tries to suffuse the introductions with humor; whereas the original “Fantasia” retained an air of formality and seriousness—alongside respect for the world-class musicians—surrounding its interpretations of the pieces (barring one interaction between Mickey Mouse and Leopold Stokowski, though that was more charming than funny), the sequel opts instead to have a bumbling Steve Martin (among others, like Penn and Teller) make a mockery of it all. It just gives off an air that the folks at Disney this time around really had no respect for the complexities in emotion and imagination that the music evokes. Unfortunately, this manifests itself into the pieces themselves. What I cannot understand is that with the talent involved or willing to be involved, the film ends up being a collection of such simplistic schlock. Indeed, in a decision rendered foolish in retrospect, Bette Midler, in the introduction to the Shostakovich piece, lists several ideas that were rejected. One would have been an epic, militaristic accompaniment to Ride of the Valkyries while another idea posed by Salvador Dali would have used baseball as a metaphor for life. Such material would have been dark, complex, and full of the adult and intellectual themes that made the original so legendary. But those ideas were scrapped (with no satisfactory explanation for why), and what did we get instead? A group of flying whales finding a magic pool in outer space (no, really, I’m not making that up). What were they thinking?

In all seriousness, though, the themes in “2000” are so straightforward that it is as if there are no themes at all. The only conflicts are those with extraordinarily one-dimensional depictions of good and bad; there are no gradations or variations on either side, there is no gray-zone: there is the purely bad and there is the purely good, and you can guess which side wins every single time. Even the penultimate finale, the Firebird Suite, which has a promising start in its depiction of a nature sprite renewing a forest (similar to The Nutcracker Suite in the original), descends into the same set of clichés. Once again, compare to the ending of the 1940 version. Set to the menacing sweep of Mussorgsky’s Night on Bald Mountain, demons and ghosts awaken in a small town and wreak havoc in the dead of night. The dark palettes of the environment and Chernabog (the main demon) juxtapose with the vivid colors of the demonic spirits and hellfire, creating a dual portrait of evil: on one hand, it is uncontrollably chaotic while on the other, it remains cold and silent yet malevolently omnipresent. Then, the morning bells ring, signaling the demons’ retreat while the sun begins to rise. As the opening to Ave Maria plays, processions of monks start to walk around the town, holding candles. The subtle light stemming from each monk mixed with the gradual appearance of the sun begins to illuminate the dark environment into a place familiar and homelike, driving away the evil that was present only a couple hours beforehand. The religious implications, the subdued and quaint beauty of the power of light and good, and the different forms of malevolence: this portrayal of the struggle between good and evil simply puts all of “Fantasia 2000” to shame.

That marks the end of this comparison. To end on perhaps a more hopeful and happier note, I would like to make clear that, despite my thrashing of “2000”, “Fantasia” is one of the few films that I desperately wish to see another sequel to. It remains the most logical choice for a sequel, considering the vast amount of great classical music and the fact that “Fantasia” does not even have a central narrative, and so anything would be possible. The creators just cannot fall into same pitfalls that “2000” did. Keep it hand-animated and do not skimp on diving into complex territory. If those two basic rules are followed, then I have no doubt that a new addition to the “Fantasia” saga could be amazing.