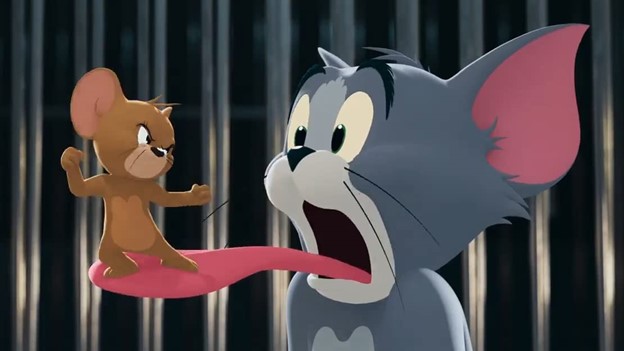 Rivals Tom and Jerry made it to the big screen in 2021. And they were in New York with a big wedding coming to fruition. And that is all that matters.

Because this film…. was not particularly good.

Yeah, both are some of pop culture’s most-recognizable duos on the animation side. Their iconic rivalry is defined by their desire to one-up each other leading to significant destruction and mayhem in their theatrical short films.

The 2021 feature is a live action/animated hybrid centering on a hotel in NY, where Kayla (Chloe Grace Moretz) cons her way into a high-profile job at the Royal Gate Hotel under management personnel Terrance Mendoza (Michael Pena) and Henry DuBros (Rob Delaney). Their objective is to host a wedding while Kayla must utilize Tom to get rid of Jerry to prevent the wedding from going awry.

The biggest problem with the film is the matter of making it a hybrid in the first place. Many people want to invest in Tom and Jerry’s craziness, and it stays only seen in short bursts throughout the film. Every other part deal with a clumsy narrative of Kayla trying to win points as someone she is not, and it constantly must go up in ruins because of Tom and Jerry’s bitterness towards one another. We get it; the cat and mouse cannot play nice with each other.

Director Tim Story, who stands affiliated with the poor Fantastic Four and Ride Along films, focuses too much on the human characters that it becomes boring. And it is not even remotely funny. It is merely a film that projects noise when needed and to push the plot further. The animal tornadoes were the only exciting things that occurred here.

Moretz, Pena, and even Ken Jeong could not save this film. It is all plain silly and somewhat hollow for the 100-minute runtime. Audiences will come and go to watch the movie because it is freaking Tom and Jerry. If nostalgia is your thing, you most likely enjoyed it.

Otherwise, one of those films that exist, alongside others like Yogi Bear and The Smurfs, to remind that a TV show to film adaptation can become easily futile. One would be better off finding the classic collection of Tom and Jerry shorts on Amazon and watch them at their households, passing along the original inventiveness and humor to the current (and following) generation.