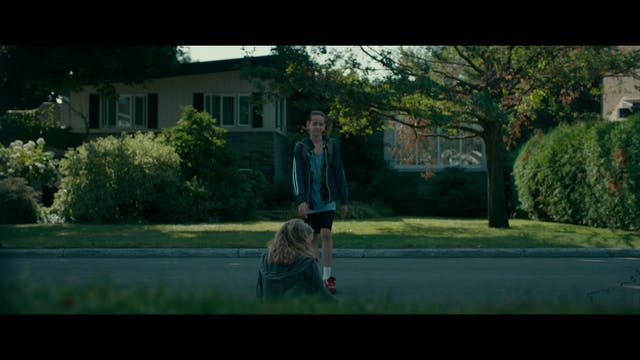 Sneak Peaks on June 14, 2021 0Likes At The Movies
ShareTwitterFacebookInstagram

Les Notres directed by Jeanne LeBlanc, who also helped write this film, is luring as you watch a small Canadian town unravel from the seams. The film opens with an intimate shot of a naked girl with her back to the camera then pivots to a banquet event for the town. There is no real context initially, but the lighting and emotion on Emilie Bierre, the star of the film, makes you feel like nothing is as it seems already. As the story develops, you quickly realize that this story is about the manipulation and molestation of Magalie, played by Emilie Bierre, who decides to keep her baby by the town’s mayor, Jean-Marc Ricard, played by Paul Doucet.

While there were interesting cinematic and story developments, like when Magalie runs away not far from home to a makeshift shelter for partying teens and she imagines seeing her friend (and adopted son of Mayor Ricard) Manuel, the film ultimately seemed to be missing something. There is no right way to depict a teenager, pregnant and unwilling to truthfully identify the father because it turns out it is the beloved mayor and next-door neighbor, but the ending was largely lacking.

The best review I saw was from Cameron Meier who said, “You might not always like where the story is going, but you will be compelled to follow.” Magalie’s road to having her baby was invested, but the final scenes seemed more abstract than they needed to be. It could be intentional, but it seemed like everybody in both families knew who the father was but did nothing, which seems wildly problematic. We never get a clear look into what and why Magalie and her family just accepted she was having a baby and had lied several times about what happened for her to be pregnant in the first place. The road to the end was compelling and captivating, but the end made everything feel pointless.

The Cannes-selected, thrilling #MeToo debut drama set in the world of elite skiing…SLALOM